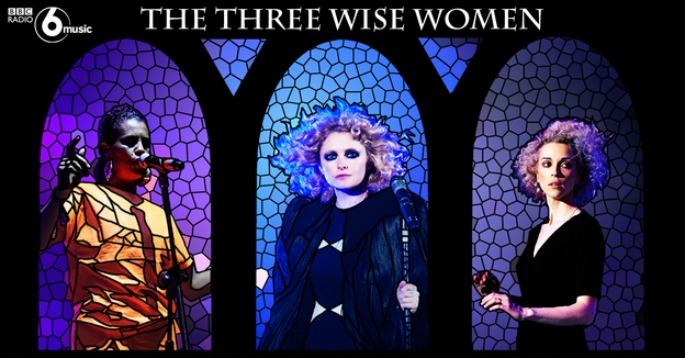 The Three Wise Women are joined by goodies from Jarvis Cocker and John Grant.

Each of them will present a two hour show (4-6pm) as well as choosing the station’s Album of the Day and picking their favourite archive shows, documentaries and live sessions.

Annie Clark promises music from Nine Inch Nails, John Coltrane and J Dilla and archive BBC sessions from Stereolab, Nick Cave and PJ Harvey, while Cherry has picked documentaries on the birth of hip hop and the Bristol underground. On Boxing Day, Goldfrapp selects docs on Serge Gainsbourg and Ennio Morricone plus a rare Kate Bush interview from 2005.

Highlights from the rest of the month include a Winter Solstice show on December 21 with American singer-songwriter John Grant, who recently relocated to Reykjavík. He’ll present John Grant’s Songs from a Dark Place (1-2pm), a documentary exploring the music of Iceland and featuring The Sugarcubes, Ben Frost, Olof Arnalds and more.

Jarvis Cocker returns to the station on December 28 (4-6pm) to present a one-off Sunday Service 2014 special, and Motörhead’s Lemmy will be on hand on New Year’s Day for two hours (7-9pm) of rock and roll.

St Vincent has had a killer year following the release of her self-titled fourth album, and she even found time to do us a FACT mix.