It’s been a strong week for Autechre fans – you’ve already been treated to an hour-long recording of their recent Warp25 live show in Krakow, and news that the pioneering duo will play at next year’s Bloc Weekend and at Sónar festival in Barcelona.

To round off the week, we’re frothing with excitement to share this recording of Autechre doing a proper pie-eyed rave set at Brixton clubnight Quirky way back in June 1994.

Zurich’s Tony F. Wilson, who put on the night along with his friend James Bignell, alerted us to the video: “I’ve no idea who is responsible for this footage nor has James who I did the night with. The camera must have been massive at that time too, so weird that it went unnoticed. A couple of people I know kept flyers but this is the first actual footage that’s appeared. It’s great ’cause I almost feel like it didn’t happen sometimes.”

Wilson has also managed to dig out the flyer for the night, which you can see below.

Robin Rimbaud, aka Scanner, was at the night too. “Amazing video of Autechre live in 1994 at Quirky. I was at this very show, great memories,” he tweeted.

Enjoy all 46 minutes and 46 seconds of the show above. The final three seconds are just perfect. 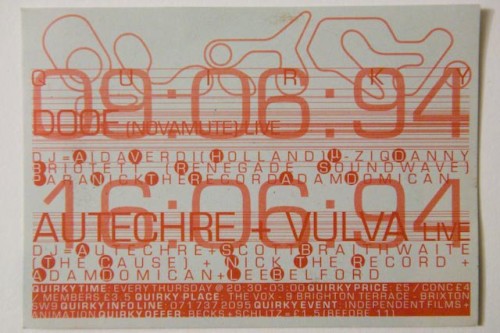