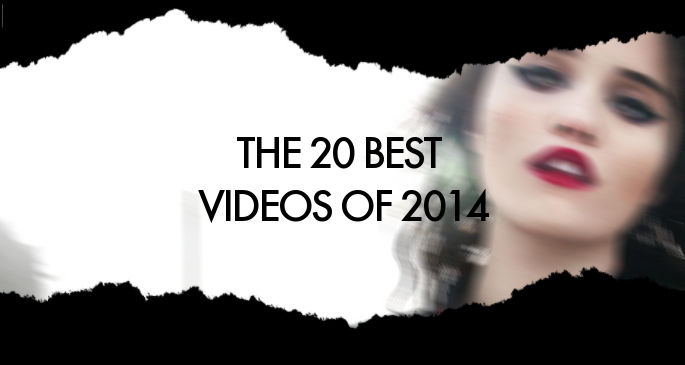 Reports of the music video’s death have been greatly exaggerated.

In 2014, the art form continued to be the province of not just Billboard-topping pop stars, but of dance music producers of all stripes, experimental noisemakers and everyone in between.

We’ve collected 20 of our favorites of the year, both short-form and long-form, viral smashes and underground favorites, whether made with airborne drones, salvaged oscilloscopes, hellish marionettes or 3D renderers.

Burial’s cinematic ‘Rival Dealer’ soundtracks this Hyperdub-sanctioned short film, a frantic descent into a late night London underworld marked by street-walking, gun-wielding and drug-running, with the uneasy violence of Gaspar Noé’s Irréversible. Burial may never get an official video — this will more than compensate.

New York soul queen Tiombe Lockhart released three eye-catching videos that flew under the radar this year, but we’ll stick with the clip for the Hudson Mohawke-produced ‘Can’t Get Enough’. Tiombe has never been afraid to use her sexuality as part of her art; her body becomes a hypnotic totem in this kaleidoscopic clip.

Boogie’s Thirst 48 was one of our favorite mixtapes of the year; the video for key track’Bitter Raps’ revisits hood flick iconography — street preachers, weed smoke, handguns hidden under mattresses — with a slow-motion approach that only increases the poignancy of the images; that shot of Boogie holding his son gives us chills.

Long before Eternal Sunshine of the Spotless Mind, Michel Gondry directed iconic music videos for Daft Punk, Björk, Beck and more. For his first video in three years, Gondry is as playfully inventive as ever as he hopped in the wayback machine with Metronomy, complete with nostalgic costumes and children’s show set design.

Los Angeles looms large over DJ Dodger Stadium’s Friend of Mine; in kind, the video for ‘Love Songs’ (and that for ‘Never End’) looms over Los Angeles (specifically, the duo’s Pico-Union neighborhood). The proliferation of drones was one of the biggest stories of the year, so it was great to see them used for less nefarious purposes.

Rome Fortune and OG Maco take over SpectraVision, superimposing themselves into everything from The Simpsons and Seinfeld to cable news and action films. As a video vixen flips channels, you’ll also catch footage from Rome’s Small VVorld cover shoot and the same hotel-destroying shoot seen in Maco’s ‘U Guessed It’ video.

Just because a video surpasses 350 million views or gets parodied on late night TV doesn’t mean there isn’t room for it on a FACT list. Dance Moms reality star Maddie Ziegler found global fame as Sia’s preteen doppleganger in the striking video for the Australian hitmaker’s reggae-kissed electropop smash.

The green-hued imagery of Clark’s ‘Superscope’ video was created with an oscilloscope salvaged from a skip, a device that Adoxo‘s Vincent Oliver used to “[paint] elegant future-bound geometry,” in Clark’s words. As they say, one man’s trash…

At times, Todd Terje can be corny, schmaltzy, and — in the word’s of the Singles Club — “cheesier than a Frenchman’s pantry.” In kind, the video for cosmic lounge tune ‘Leisure Suit Preben’ is winkingly nostalgic as it observes a day in the life of a Leisure Suit Larry-inspired “singer, dancer and party animal.”

11. SKY FERREIRA
‘I BLAME MYSELF’
Directed by: Grant Singer

Sky Ferreira’s casting of herself as a member of an otherwise black street gang was one of the more problematic moments in a year of pop marked by questions of appropriation. Still, we can’t help but feel that she knew exactly what she was doing with this act of transgression: the red-lipped vamping, the MJ-inspired dance routine and the interrogation-turned-striptease all add to her “reputation.”

Katy Perry’s technicolor trap-pop adventure caused its fair share of thinkpieces, seemingly written by a generation that never saw Michael Jackson’s ‘Remember The Time’ video. That’s all this is — just swap Eddie Murphy, Magic Johnson and Iman for Juicy J in a sarcophagus, a Twinkie pyramid and a shiba inu. Katy refuses to take herself seriously; maybe we shouldn’t either.

The weirdest character on an already out-there UNO NYC roster, Gobby outdid himself with ‘Red Seal’. Marinettes run amok across a dollhouse hellscape that looks like a nightmarish version of Mister Rogers’ Neighborhood of Make-Believe, and it’s all soundtracked by Gobby’s uneasy electronics and home invasion news clips.

Grimes has been relatively quiet since releasing Visions in 2012, but ‘Go’ provided a tantalizing glimpse of what may be next for the Canadian experimental pop star. Pairing Game of Thrones with a blacklit fantasy rave and borrowing a few techniques from Hype Williams, Claire and her brother outdid 2012’s iconic ‘Genesis’ clip. Thank god Rihanna passed on this one.

06. MURLO
‘INTO MIST’
Directed by: Murlo

Not only does Murlo lay down some of the most gorgeous leads in grime, but the Midlands-via-London producer is also a talented illustrator and animator. His visuals for Boxed anthem ‘Into Mist’ attack delicately-rendered ancient sculptures with exploding paintballs, neon lasers and digital blood for a surreal, synesthetic adventure.

Arca and Jesse Kanda continued their long-running audio-visual collaboration with TRAUMA, an ongoing film project that “will span through Arca’s existing and future works.” Only two parts of the project surfaced online, but both were stunning explorations of warped, grotesque body horror. Part 1 resembles Chris Cunningham directing a trio of Dancing Babies, while Part 2 uses extreme closeups to turn tounge, teeth and throat into visceral musical instruemnts. The pair’s collaboration has continued with impressive videos for Arca’s Xen, but TRAUMA is definitely their leading edge.

04. HOW TO DRESS WELL
WHAT IS THIS HEART? TRILOGY
Directed by: Johannes Greve Muskat

How To Dress Well’s What Is This Heart? trilogy is comprised of videos for ‘Repeat Pleasure’, ‘Face Again’ and ‘Childhood Faith In Love’, and it plays like a three-act short film about young love, old age, grief and forgiveness. It maybe too earnest for some, but we can’t fault Krell and company for their ambition, which gives a music video treatment to the melodramatic love and loss explored in Six Feet Under.

Nicki’s ‘Anaconda’ is the easy choice: her over-the-top, product-placed butt tribute has its virtues (sapphic overtones, Drake denial), but ‘Lookin Ass’ is the connoisseur’s pick. Shot in stark black-and-white by Nabil, Nicki is pure sex — even with a make-under, even while outrapping every man in the game. There’s nothing subtle about this misandry anthem, as Nicki literally destroys the male gaze with a pair of assault rifles, ending the clip with a shot that continues the tradition of The Great Train Robbery and Goodfellas for a new generation.

“It’s a big personal interest, stuff like the modernist movement and brutalist architecture,” Bok Bok told us earlier this year. “I’ve been interested in that from before I was doing music, so it’s natural for me to bring them together.” That drive has never been clearer than in the video for ‘Melba’s Call’, a tour through a finely-detailed 3D environment that combines a fantasy studio, a caged jungle and Kelela on the videophone, all with the digital precision of the song itself.

There is no one in pop music with a better sense of their aesthetic than FKA Twigs. From cover art to live performance to music videos, the year’s breakthrough star drives every facet of her work with a clear-eyed vision. Every time she shares a video, it’s sure to captivate (the execution-themed ‘Video Girl’ is also stunning), but ‘Two Weeks’ is in its own lane. The video’s setting — ornate Egyptian palace — doesn’t scream “restraint,” but the video certainly does: in one long shot, a slow zoom-out reveals Twigs’ multitudes — goddess, dancer, attendant, spectator, sacrifice – like a self-contained ‘Around The World’, without the quick cuts that define the medium. “Motherfucker, get your mouth open,” she commands in a telling lyric. “You know you’re mine.” We can’t argue with that.