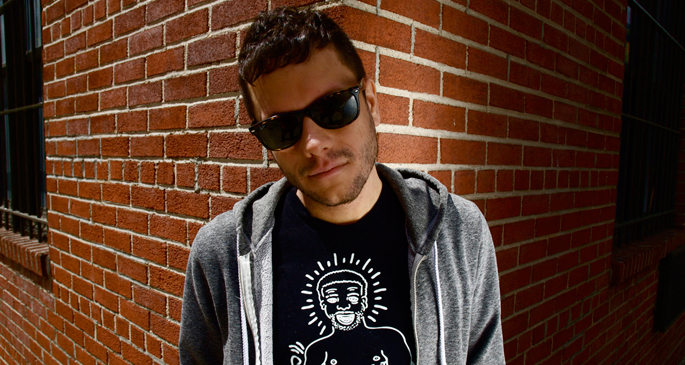 The New York house veteran returns with a new EP.

As we noted when premiering his most recent 12″, Eli Escobar is no Johnny-come-lately in regards to house music, having released a ton of music since the late ’90s and remaining a fixture in the New York underground since.

The DJ/producer has been on a tear this year, and after releasing his Up All Night LP in August, he’s linked up with Gotham late-night crew Safer At Night for the Madonna And The Devil EP.

We chatted with the producer about the EP, the New York after hours scene and movie scores; read our interview while you stream the EP in full below. Madonna And The Devil is due out tomorrow (December 9) via Safer At Night.

What inspired and influenced the songs on the EP?

Well, each track is very different from the other. But I did keep in mind that Safer At Night is putting out very dark, after-hours-centric music. ‘Madonna and the Devil’ is a bit influenced by the Shelter and some of the more techno-sounding records Timmy Regisford has released but now that I listen to it I don’t really hear that influence at all anymore!

Maybe that’s the best way: you become inspired and create something your own in the end. But definitely I’d say I put all that percussion in as an attempt to get that sound you hear in songs like Timmy’s ‘Tension’.'”This Thing’ was actually a remix for another label. I submitted it and never heard back but I really liked the beat. The only thing I used from the song I was remixing was a vocal sample so I just put in my own vocal sample!

What do you think of the after hours scene in New York right now?

My best memories of clubbing ’til the sun came out back in the days had a lot to do with music and people staying out because the music kept them going and nowadays it seems like the afters are where people go to do drugs and just hear boring techno that has no vocals or whatever. Not really my thing. As far as the sound right now, I like the guys in Carry Nation cause they play proper house music and always kill it. And if I may big up my own Night People crew (me, Blu Jemz and Lloydski), I think we do a pretty good job ourselves!

What was your best club experience this year?

Oh, easy one: the Hercules and Love Affair show at Verboten was just perfect. They had the most amazing light show and the songs from the new album sound even better live. The crowd was live and the overall energy in the room was through the roof! Plus, Nomi is back and I think she belongs (no pun intended) with them! Also, I had just DJed at Output right before and had a great set so it was a fun night all around. One of those nights when you realize New York is still so amazing and there’s always a million things going on every night.

‘Eli’s Theme’ has some nice Moroder or Carpenter vibes; if you could soundtrack a movie, what would it be?

Funny you should ask that, because I’m scoring my first movie ever right now! But the sound I’m going with for this film is totally different and kinda sounds like the Modern Jazz Quartet. I actually studied jazz piano in college so it’s not too much of a stretch for me. But, if I could soundtrack any movie, it would have to be After Hours! Best movie ever. Or Desperately Seeking Susan. Or Party Girl. Or Heathers. Or She’s Gotta Have It.