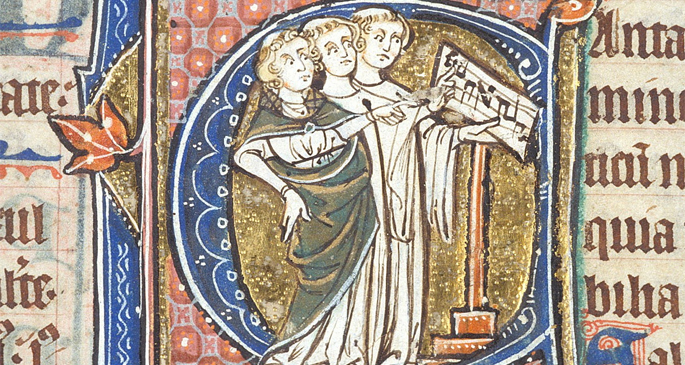 A snippet of music penned 1,100 years ago has proved to be the earliest example of polyphonic choral music.

The chance discovery was made by PhD student Giovanni Varelli in a manuscript at the British Library. The short composition, which would have only been a few seconds long, was found at the bottom of a portrait of a saint and has been dated to around AD900.

The discovery is the earliest practical example of polyphonic choral music music, where the voices sing different melodies that combine to make one composition. The next comes from the Winchester Troper collection and is dated to around 1000.

According to PhD student Varelli, who specialises in early notation, the unknown composer was experimenting with style and breaking the rules as they stood at the time.

“What’s interesting here is that we are looking at the birth of polyphonic music and we are not seeing what we expected. Typically, polyphonic music is seen as having developed from a set of fixed rules and almost mechanical practice, ” said Varelli. “This changes how we understand that development precisely because whoever wrote it was breaking those rules.”

“It shows that music at this time was in a state of flux and development. The conventions were less rules to be followed than a starting point from which one might explore new compositional paths.”

“The rules being applied here laid the foundations for those that developed and governed the majority of western music history for the next thousand years. This discovery shows how they were evolving, and how they existed in a constant state of transformation, around the year 900.” [via The Guardian]