‘Blurred Lines’ vs Marvin Gaye: Lawyer for Pharrell and Robin Thicke demands that songs are not played in court 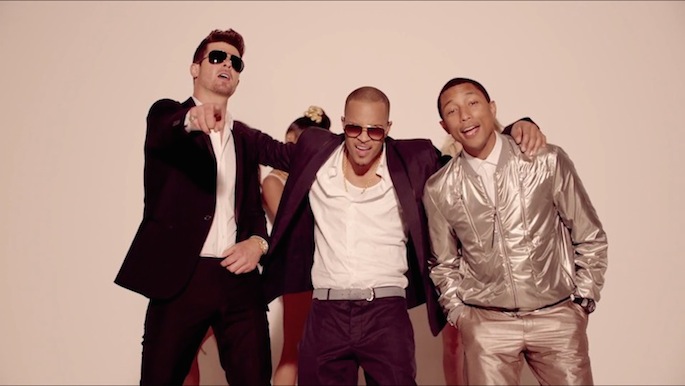 A crafty bit of copyright law could put the offending songs on mute.

The legal battle between Marvin Gaye’s family and the makers of ‘Blurred Lines’ will finally reach court next month, and there’s yet another weird twist on the table.

To recap: the allegation is that Robin Thicke and Pharrell Williams ripped off Gaye’s ‘Got To Give It Up’ to create their pop smash. It’s a suggestion that certainly has a whiff of truth about it, due to Thicke’s previous mentions of the song and his six-figure settlement offer to the Gaye family. However, in a court deposition Thicke later claimed he was too addled on Vicodin and alcohol at the time to know what was going on, then said Pharrell had basically written it all himself anyway.

The latest twist concerns the issue of whether the two songs will be heard in court, an event you might think was inevitable in such a case. Not so.

As CMU reports, lawyers for Thicke and Williams are demanding that the songs are not played to the jury – an argument they’re basing on a crafty bit of copyright law that has already been acknowledged by the judge. Because the Gaye family allege that ‘Blurred Lines’ infringes the copyright of the composition, rather than the recording, of ‘Got To Give It Up’, Thicke and Williams’ lawyers want the court to consider both songs as compositions – that is, how they’re laid out in the sheet music.

The ‘Blurred Lines’ team argue that any similarities to ‘Got To Give It Up’ are not related to the original composition, but are the extra bits – like ad libbed vocals – that were thrown in during the recording. According to their interpretation of the relevant law, those bits are not protected by copyright.

Playing the songs to the court would be “unduly prejudicial”, they say, and “likely to confuse the issues, and likely to mislead the jury because numerous elements in the sound recordings… are not found in the deposit copy and hence are not probative of copying”.

As the case will be decided by a jury, who perhaps won’t have the expertise to judge similarities between sheet music, the ‘Blurred Lines’ team propose that the core compositions of the two tracks are played on a keyboard in court. Which would make for a bizarre scene indeed.

The Gaye family’s lawyer has rejected the idea, arguing: “The musical composition ‘Got To Give it Up’ was created simultaneously as it was being recorded. Thus, the musical composition of ‘Got To Give it Up’ in total is embodied in the sound recording. Therefore, the sound recording is the best evidence for what is included under the intrinsic test”.

The case arrives in court on February 10.