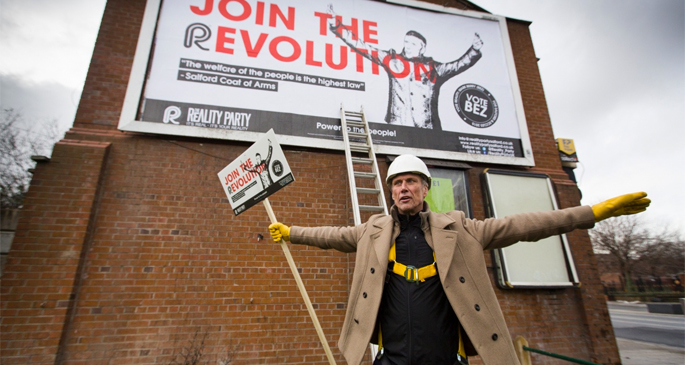 Due to a clerical error, one that we imagine had something to do with the mercurial nature of this story’s hero, it turns the Reality Party doesn’t really exist – because Bez didn’t properly register with the Electoral Commission.

The Commission wrote to Bez several times warning him that his Reality Party sounded too much like another faction, The Realists’ Party, and that the similarity could cause confusion at the ballot. He was given until this Monday to sort it out, but looks like he’s missed the boat, as the Manchester Evening News reports.

However, a spokesman said: “There’s still time for the [Reality] party to submit a revised name to the Commission before candidates who want to stand for a party have to submit their nominations papers to Acting Returning Officers with the name of the registered party they are standing for.” If you can make sense of that, perhaps you should consider standing for office too.

Bez is running for Parliament on an anti-fracking ticket.

Madchester legend Bez is aiming to be the next Member of Parliament for the seat of Salford and Eccles, replacing Labour’s Hazel Blears, who is standing down in May. Bez is standing for the Reality Party, which aims to “bring power back to the people”.

At the core of Bez’s campaign is the fight against fracking – the controversial and environmentally damaging process of injecting liquid at high pressure into the earth, with the aim of extracting oil or gas.

“Shake your maracas if you are against the frackers,” reads one campaign slogan. [via The Guardian]