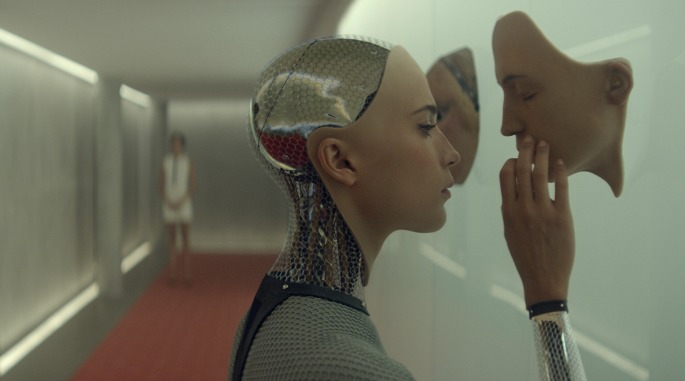 The soundtrack was created by Portishead’s Geoff Barrow and composer Ben Salisbury, who previously worked together on an unused score for the 2012 movie Dredd (adapted for the big screen by Garland) which was eventually released as the excellent Drokk: Music Inspired By Mega-City One.

Ex Machina, which marks the directorial debut of screenwriter Alex Garland (28 Days Later, Sunshine), stars Oscar Isaac and Domhnall Gleeson alongside Alicia Vikander as a robot built to test the boundaries between humans and machines.

“It’s been great for Ben and me to be working with Alex Garland again,” said Barrow, “and hopefully we have written the kind of score an intense sci-fi thriller like this needs.”

The album is made up of 10 specially constructed and extended tracks put together by the duo using their music from the film, as Sainsbury explains. “We wanted to slightly get away from the type of soundtrack album that is just a direct copy of the film’s score – often leading to a huge tracklist with lots of short cues. Instead, we’ve tried to put together an album of fuller length tracks and a structure that mirrors the film in some way. Saying that, all our music from the film is in there somewhere.”

The soundtrack will be released by Invada on LP and CD (Universal is doing the digital version) on April 10 in the UK and the US, in line with the film’s release in the States. There will also be an additional vinyl disc and CD of bonus material and cues not included on the main album.

Hear ‘Hacking/Cutting’ below, and go and see the film – it’s seriously good.

FACT caught up with Barrow in 2012 to find out more about his partnership with Salisbury and the call of Hollywood.