Lists I By Paul Nickerson and Francis EnglehardtI 21.01.15

“How many boring Jeff Mills rip-offs can one genre take?”: Slow to Speak’s month in house and techno 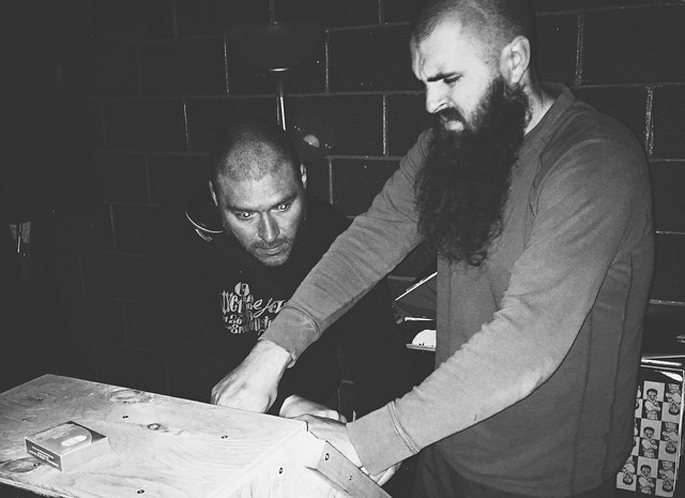 Slow to Speak, the duo behind New York record store Dope Jams, have taken over FACT’s house and techno column.

For almost a decade now, Francis Englehardt and Paul Nickerson have run dance music’s most iconoclastic record store, and are as enthusiastic and enlightening with their recommendations as they are ruthless with their takedowns – just ask any of the high-profile DJs who’ve found themselves in their line of fire.

Every month, Slow to Speak will be rounding up the best new 12″s around – or at least, that’s the plan. In case you haven’t noticed, these dudes march to the beat of their own drum – so stuff from other years and genres invariably features alongside newer club-ready material. Head to the next page to peruse their picks – and peep below to enjoy timelapse footage of the store’s recent Halloween party, featuring roaming wizards and some sterling ersatz cobweb work.

If you happen to be in the New York area over Valentine’s Day, and fancy a proper night out (with or without chocolates), then make sure you drag your dancing feet over to Good Room in Brooklyn, where Francis Englehardt and Paul Nickerson will be playing the good stuff all night. Tickets can be snagged here.

The ideal transition record. The beginning of a perfect party always slowly builds momentum so that before the people even realize it they are losing their minds. This is the exact record to take them from being in a groove to losing it. The subtlety of the beginning to the change into the arpeggiator is sick. Just make sure you’re prepared to mix out around the four-minute mark to keep the momentum moving forward.

This remix sums up the current state of dance music perfectly. Silent Servant flies out of the gate with a killer groove, but the track never goes anywhere – it’s five fucking minutes of the same shit. You can just see this getting played at Output and 300 white guys standing there stiff as a board methodically nodding their heads.

The reason those early Detroit techno records were (and still are) so great is because they were melodic and had progressions – elements that humanized the music. That’s what made them funky and that’s sure as hell what made girls dance to them. This record is so close to being a fucking monster if Servant would just let himself go all the way. I mean, imagine if he resolved the tension that builds up for the first three minutes with big eerie Legowelt-esque keys. The nerds at Output would be having uncontrollable jerking spasms and contorting their bodies so much that the room would look like a Parkinson’s fundraiser. People would be pulling their throats out of their mouths and babies would be born moments later through immaculate conception. How is this not what these producers strive towards? It’s as if they are scared of showing any emotion, thinking they are as cool as fucking Dylan McKay.

But I guess my good friend Chris Orr sums it up best: “The genre I am hoping will really blow up in 2015 is ‘Minimal Goth Techno Light,’ sometimes called ‘Minimal Techno Goth Light’ or ‘Your Trust Fund Won’t Teleport You Back To 1984, You Annoying Cunt. You Don’t Have The Ear To Appreciate Anything With The Slightest Degree Of R&B In It. You Weren’t Victimized In High School; You Were Ignored, And Rightly So.’

Haunting cryptic techno by a Spanish nomad. This is the type of record Jonny Romero could do some amazing spellwork to. Find a forest and play it loud there – trees love this kinda shit.

From the Theories of Anxiety EP on Danse-Noir, this heartbreaking ode to interaction is the perfect winter jam for holing up in your crib and NOT over thinking any and everything. As they say, analysis is paralysis.

Hip house is back! Swiping the beat from Maya Jane Coles’ ‘What They Say’ and slowing it way down, Nicki Minaj and crew have taken a boring MK rip-off and given it exactly what it needed – the funk! The verse starting at 2:46 proves that no matter how much sizzurp Lil Wayne drinks, his mind is still fertile as fuck and his flow is beyond reach. If there were any justice left in the world Maya Jane Coles would be forwarding any royalties she makes off this to Marc Kinchen.

Just when I had all but lost hope in techno, Monolake comes back from the dead to show people how it’s done. Yes, Robert Henke has been making music, but the Monolake project has been put on hold for a couple of years now and for me it’s by far his best project. I’m not much for techno in museums, although I can’t knock the artists for trying to find another way to make a buck. It just gets exhausting to hear these incredibly complex ideas when the music doesn’t live up to the concept. I think that’s why the Monolake project has been so great – it’s really just an individual’s take on techno, and not trying to copy what’s already been done. I mean how many boring Jeff Mills rip-offs can one genre take? If you want to be on a Monolake, Basic Channel or Jeff Mills level you have to find your own sound. That is what separates these guys from the rest of the pack.

There are records that, when heard while entering a club, will tell you what the night will bring. These records aren’t always prime time party rockers, but nonetheless they have so much emotion that they open doors to the unknown. That’s what this record does. It’s the kind of record that makes you want to rip your hair out. It’s so subtle and intensely beautiful that it hurts. Like Theo Parrish’s “out of key” masterpiece ‘Walking Thru The Sky’.

D’Marc Cantu is for me one of the few people that I can turn to on a regular basis for original, sincere music and this track is a perfect example. A beautiful slow builder that will melt everything away.

“Just plain wrong in the best way possible”: Slow To Speak’s month in house and techno

“Fuck just the TIP, slam the whole fucking thing in!”: Slow To Speak’s month in house and techno

“Who would believe that Moby could still make a dope record?”: Slow To Speak’s month in house and techno