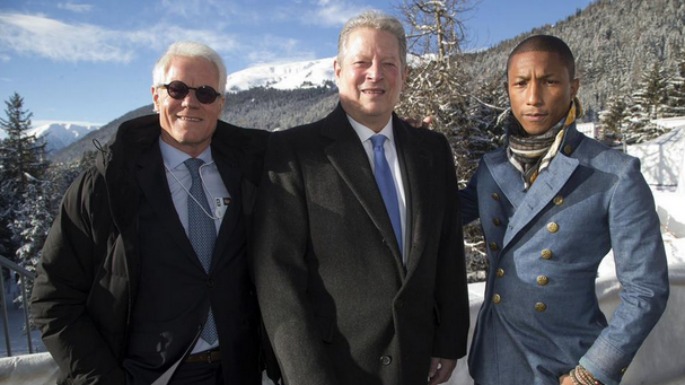 The super-producer joined climate campaigner Al Gore at the World Economic Forum in Davos to unveil the event, which is set to take place across seven continents – including Antarctica – on June 18. The aim of the concerts, said Gore, is to get a bandwagon of public opinion rolling in the run-up to the Climate Meeting in Paris in December.

New York City and Paris are among the cities which will host the concerts, to be broadcast to a global television audience of 2 billion across 193 television networks.

Williams is the event’s creative director. “This is a new subject for me, but a great challenge,” he said. “I think you guys know how serious the global warming thing is.

While he didn’t reveal who would be performing at the stadium shows, he added: “Instead of just having people perform, we literally are going to have humanity harmonise all at once.”

Literally all of humanity!

The European leg of the event will take place in Paris ahead of the 2015 UN climate change conference in the French capital, scheduled for December.

At the first Live Earth event in 2007, more than 150 acts – including the Beastie Boys, Kanye West, Rihanna, Metallica and MIA – performed in 11 locations around the world. [via The Guardian]