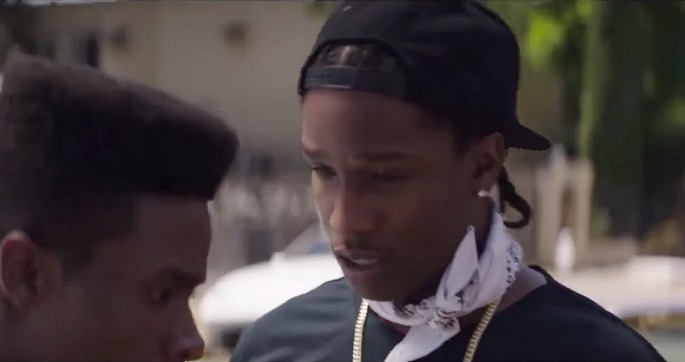 UPDATE: Though the initial trailer for DOPE has been taken down, you can now watch the new official trailer at the bottom and once again spot the A$AP.

Pharrell’s taking care of the soundtrack.

A$AP Rocky is making his movie debut with a supporting role in Dope, a “coming of age comedy/drama for the post hip-hop generation” set to premiere at Sundance this week.

The movie from director Rick Famuyiwa (Brown Sugar, Our Family Wedding) follows teenager Malcolm (played by Shameik Moore) as he attempts to leave his hood of Inglewood, California, and make it into Harvard.

“The main character, Malcolm is a Nineties hip-hop geek,” said Famuyiwa. “He isn’t a drug dealer or a gang banger. He’s into all types of music, and video games and computers. We’ve seen a lot of films about everything else in these neighborhoods — the crime, the athletes, the gangs — but you don’t see films about the regular kids who have to survive in these streets.”

Rocky’s role is said to be a little more substantial than you’d expect. He reportedly asked for a part in Dope after helping his girlfriend, model Chanel Iman, practice lines for her own audition. Famuyiwa loved his “natural charisma and ability”, reports Entertainment Weekly.

Pharrell contributed to the soundtrack, writing three songs for Malcolm’s garage band. Famuyiwa said: “It was exhilarating to sit there in the studio with Pharrell as he composed this music. I’d tell him about Malcolm and then he’d disappear to his magic lair, or wherever he goes, and then he’d have a song about it and it’d be amazing. I think he was key in helping me figure out who these kids are in this world.”