Also confirmed are Major Lazer, Tinashe and Rae Sremmurd, along with Stromae, PartyNextDoor, Netsky and Robin Schluz. See below for ticket details.

Sound familiar? That’s because Drizzy was supposed to play last year’s weekender, but was forced to pull out at the last minute on doctor’s orders. Kanye West stepped in to fill his slot on the London leg of the festival, while Birmingham fans got a dose of Rudimental.

But all is forgiven because Drake is having another go at headlining the event – he’s booked to play the Friday of the rebranded New Look Wireless, which takes place from July 3-5 at London’s Finsbury Park (no Birmingham leg this year).

Avicii and David Guetta will bring the EDM pyrotechnics to their headline slots on Saturday and Sunday respectively, while elsewhere on the line-up there’s hip-hop from Nicki Minaj, Kendrick Lamar and Joey Bada$$, chart-dance from Gorgon City, Clean Bandit and Duke Dumont, and some old school teachings from Grandmaster Flash and Arrested Development.

Day tickets cost from £62.50 – £69.50 across the weekend and multi-day tickets will also be available. All passes will go on sale from 9am on February 3. [via Time Out] 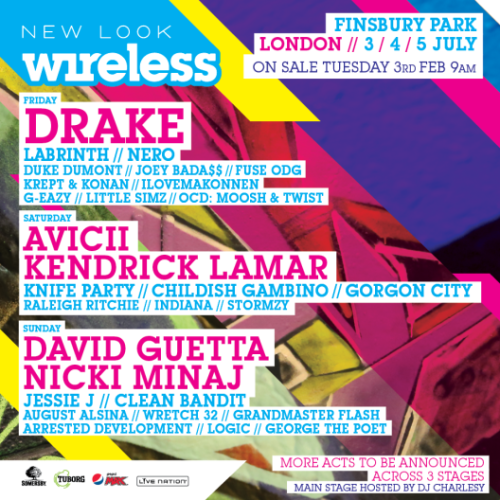