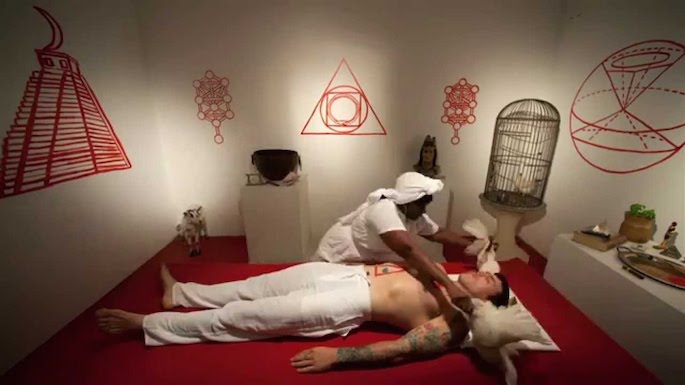 Miami weirdo Otto Von Schirach is always good for high-concept, high-camp videos, and his new short film doesn’t disappoint. The Jodorowsky-styled lo-fi sci-fi of Pineal Warriors mixes Santeria, the Illuminati, third eyes and more. There’s a bonus video, too: the clip for his electro-fied Miami bass jam ‘SuperMeng’ plays over the credits (and here, too).

No, this one’s not new, but the two-decade-old video is just seeing the light of day now. As Rhymesayers explains, ‘Ear Blister’ was recorded for a compilation that never materialized, thus negating the need for a video release, even as the song became a fixture in the group’s live sets and a fan favorite. (Hat tip: Steady Bloggin)

For her horn-heavy single, Nika Danilova heads to a warehouse and delivers a minimalist-goth version of Flashdance. Alternatively, check out footage of Danilova performing in Brooklyn as the (not quite) blizzard begins.

The Fool’s Gold co-founder teams with Bronx rap crew B.I.C. (“Bitches Is Crazy”) for ‘Wuts That’, he latest brash-rap single. The video doesn’t do much — a performance, booze and weed, lo-fi karaoke doodles — but they had fun shooting it and you can do worse than K.I.S.S. as a guiding principal.

El-P and Killer Mike take a break from assembling Meow The Jewels to share the warped psychedelia of the ‘Lie, Cheat, Steal’ video. Living up to the song’s title, the pair get political and don Nixon and Obama masks. America, the Run the Jewels way.

MUGWUMP
‘Until You’re Worth It’
Dir: Sam Kadz

The lithe nu-disco of Mugwump’s ‘Until You’re Worth It’ gets an equally lithe video treatment, as dancers twist and contort in slowed-motion. Flesh is the focus, but not in the usual way: the camera lingers on shoulder blades, ribs and elbows, highlighting the alien aspects of the human body.

Take that, Idris Elba: you’re not the only veteran of The Wire with delusions of rap stardom. Dominic West, who played Detective Jimmy McNulty on the iconic HBO show, stops by Nottingham’s Community Recording Studio to make his SB.TV debut alongside newcomers Sinead, Bugsey and Jah Digga. Come on, Dom — drop a verse!

Forget Welcome to Chiraq: soul-trap auteur Tree and APJ Films present a short-but-sobering look at the streets of Chicago. “Not only am I in tune with trap music, I come from the trap — born in one of the most notorious projects in the country,” writes Tree. “People see the more classic music I make and here I wanted to take it back to the trap… I still have love for the the neighborhood and the people I grew up with.” Tree’s TrapGenius album is due soon.