Well, perhaps not that improbably – Hospital puts out as much techno as noise these days, and besides, Ninos Du Brasil are extreme in their own way: take the duo’s live shows – a high-exertion ritual of sweaty bodies, confetti explosions and floor toms battered without mercy.

Ninos are the partnership of Nico Vascellari and Nicolo Fortuni, two artist-musicians who met playing together in Italian punk groups. At the root of the project is a shared interest in Batucada, an African-influenced Brazilian percussion style characterised by its massed drums and rapid, repetitive rhythms. But Vascellari prefers to talk about the project as instinctual and spontaneous rather than anything so studied; as he puts it, “we approach Brazilian rhythms not with the idea that they were coming from a Third World, but from a new world.” The result is perhaps comparable to William Bennett’s Cut Hands records – exotic of feel, but certainly unorthodox of style, off on its own wild trip. 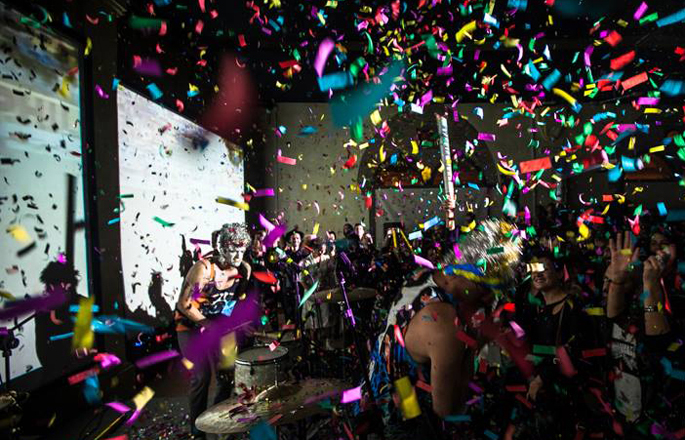 “For a long time, dancing meant moshing to us.”

Ninos Du Brasil kicked off 2015 with a new 12″ single, on a new label. Aromobates NDB sees the light of day not on Hospital Productions, but another New York label of good vintage: DFA Records. Quite a leap, and they’re bringing the sinister, adrenalized feel of Novos Mistérios with them. “These two songs are meant to be poisonous and malignant,” writes Vascellar, “as if somebody had the idea of inviting us to a party between the bushes of Queimada Grande.” (Ilha da Queimada Grande, or “Snake Island”, is to be found just off the coast of São Paulo, and is home to the Bothrops viper, one of the most venomous snakes in the world).

FACT spoke with Nico Vascellari about Ninos Du Brasil’s hardcore roots, the influence of conceptual art, and the importance of instinct in their music.

So let’s take it back to the beginning: how and where did you meet? When did your artistic relationship begin? I gather you both share history on the Italian punk scene – did these bands lead/evolve naturally into Ninos Du Brasil? Or was there more of a conceptual break?

Nicolò and I started playing music at the end of the ’90s. I was singing for a hardcore band called With Love, and we were looking for a drummer – not easy in the foggy Italian countryside. Nicolò used to play drums and I thought his style was great and unique. He joined With Love and we were actually in a van touring when I came up with the idea of Ninos Du Brasil – I believe we were in Japan. The idea was to be a band that would open for With Love, pretending to have nothing in common with us, singing for an hour or so – just “No Somos Ninos Du Brasil/Somos Ninos Du Brasil” while playing a very straight rhythm on a drum. The idea was just to annoy people and make sure that only those who were very interested in With Love would stay. I wouldn’t be able to tell you why Nicolò and I felt this was a good idea more than 10 years later.

Ninos Du Brasil employ elements of batucada, a Brazilian percussion style. How and where were you first exposed to this, and what made you want to pursue it as a style? How ‘orthodox’ do you play it?

It was a combination of intuition and genuine passion for it. Our approach to rhythm is very physical – sexual, in a way. I like to believe that we approach this style with the same needs and motivations people approached it with when it was developed. So far I think we have made it work in a way that we consider genuine and spontaneous. 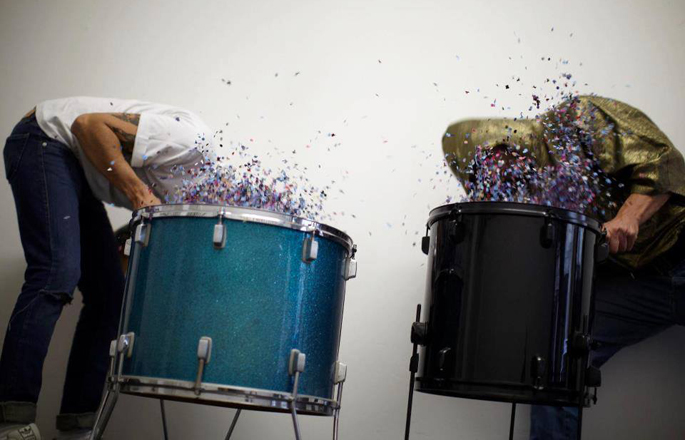 “Michael Jackson once said that you don’t have to think about it, but feel it.”

There is a pretty long history of techno artists working with Latin rhythms – in the music of Ricardo Villalobos for example. Do you feel any affinity with this stuff, or are you approaching the music from a different angle?

We actually don’t feel much connection to that history, not ’til now at least. We have started listening properly to Villalobos only after some people have made the comparison. We come from a very different background – for a long time, dancing meant moshing to us.

Nico, you work as a conceptual and performance artist. Have elements of your art leaked into Ninos Du Brasil as a theoretical or performative entity? From what little I’ve seen it plays with ideas of cultural anthropology, tribal and ritual practice – all elements I can easily imagine play a role in Ninos Du Brasil.

I have always tried to keep Ninos Du Brasil separated from my own personal practice – but not always succeeding, I must admit. Ninos Du Brasil have, for example, played at several exhibitions and museums. I see what you mean and I agree about ideas of cultural anthropology. Often in my personal investigations, I am interested in approaching subjects without much knowledge about them – I start to study only after I feel I am deeply into the matters. Talking about dancing, Michael Jackson once said that you don’t have to think about it, but feel it.

Can you tell me about the cover of Novos Mistérios? It’s a striking image – there’s something quite totemic about it, a man donning animal skin.

The cover was made by Luigi Ontani, an amazing artist I had the luck and pleasure to have met many years ago. While I was drawing possible fonts for the cover of the album I came to realise that what I was doing reminded me of Ontani’s imagery. I was surprised not to have thought about this link before. I called Ontani immediately and invited him to work on the cover for the album. We had a few options to choose from, but we and Dominick all felt like this image best captured the mood of the album. All the tracks were written thinking of escaping from an ancient entity following us through the jungle.

Nico, I remember first coming across your work through the Jesus tape, a collaboration with Prurient that was released on Hospital Productions a few years back. How did you hook up with Dominick Fernow?

Dominick and I met many years ago. On the day he opened the Hospital Productions store in NYC, and then at No Fun. We stayed in touch through the years, but it was during the performances titled ‘Untitled Jesus’ that we became friends. I have always had a high regard for his work, dedication and focus. I must admit that it took me a while before letting him listen to Ninos Du Brasil, and I was surprised by his enthusiasm. Dominick even played with us on stage a few times while he was in Italy.

I gather Ninos Du Brasil have been touring pretty extensively in the last year – is it important that you exist as a live entity, with organic percussion? Do you prefer to play alongside bands, or in club spaces?

Ninos Du Brasil started mainly with the idea of being a live band. To this day it is crucial for us to play live, even if things have developed in a surprising way. We try not to have preferences concerning venues and situation. The live experience is supposed to be challenging and difficult – not just for the audience, but for Ninos Du Brasil as well.

And how did you come to be released by DFA? Quite an unusual leap, from Hospital Productions to DFA, although given your sound it makes a weird kind of sense. Do you feel the need to shape your sound to label, at all?

Absolutely not. Actually, we find the 12″ on DFA to be more industrial and poisonous sounding than the last album on Hospital Productions. It was Black Dice, a band we both have loved and followed since their first 7″ on Gravity Records, that introduced us to DFA Records. We did few shows with them right when we started.

Finally – what can we expect from Ninos Du Brasil in 2015? Am I right in thinking that you’ve scored a film?

We have worked on the soundtracks of three movies so far. It is something we really have enjoyed doing. We are currently writing a new album inspired by an obscure and nocturnal village in Brazil, and together with this we are developing a completely new scenario for our live shows.