Björk’s MoMA exhibition is an emotional journey through her past, present and future

New York City’s Museum of Modern Art has a problem when it comes to experiential exhibitions.

It would be untrue to say that curator Klaus Bisenbach — who was responsible for MoMA’s Kraftwerk performance series — isn’t on top of his game when it comes to selecting artists to bring in for massive retrospectives. As curator, he has commissioned work that not only challenges the museum’s visitors, but also how the museum’s space can be used. (See 2010’s Marina Abramovic: The Artist is Present, which festooned doorways with naked bodies one would have to touch to get through, but also utilized usually unused corners of MoMA to facilitate Abramovic’s work.) But a retrospective like Abramovic’s or Björk’s new eponymous exhibition tends to be teeming with patrons. It’s easy to get overwhelmed by crowds and not give yourself the amount of time to absorb the work; Björk demands this of its audience.

The collection is a multifaceted look into the ephemera of the singer’s solo career, including her recent album Vulnicura. The lobby is furnished with instruments used on Biophilia — MoMA’s first ever app acquisition — which Glenn D. Lowry says are meant to bring museum-goers into her world as soon as they come off the street. There is the expected display of Björk’s music videos, which, made in collaboration with directors like Spike Jonze and Michel Gondry, are pieces of their own merit, but not the main attraction.

On MoMA’s third floor, shrouded in black velvet curtains, is a piece called ‘Songlines’. There is a lot to hate here if your museum M.O. is get in, get out. And with the overwhelming swarms of journalists and photographers at yesterday’s press preview, it seemed impossible to get the full experience without succumbing to claustrophobia, anxiety or just plain anger toward everyone around you. The volume of people also clouded exactly how to properly approach the 39-minute experience. 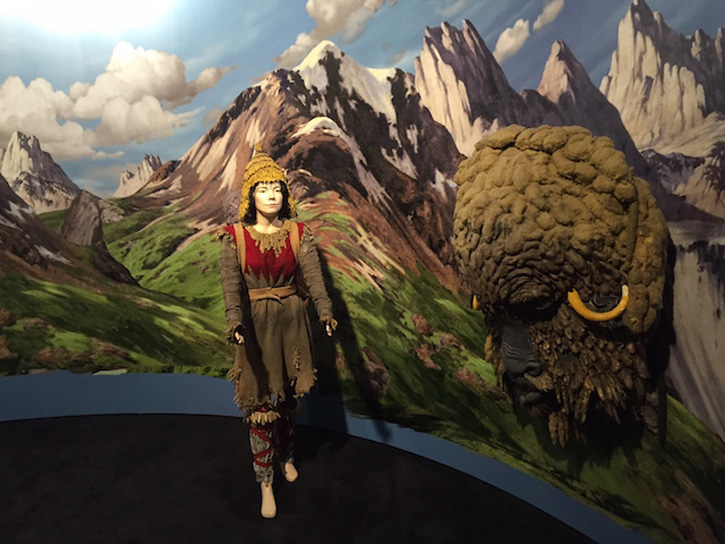 We generally don’t think of visual art spaces as places to absorb sound on its own; what ‘Songlines’ asks you to do is just that. Equipped with an iPod and headphones, you are guided through themed rooms based on the first eight of Björk’s full-length projects (save the Dancer in the Dark soundtrack). The iPod app, a collaboration between Volkswagen and MoMA, is motion sensitive and will trigger the next album as you move through each room. Do not do this until you’ve heard everything. Just don’t. As soon as you get to Vespertine, you realize that you are supposed to take in all five minutes or so of the audio in one space — to freeze yourself in that time, allow the storyteller speaking over the Björk soundtrack to finish spinning her yarn and to submit yourself to the subtle male voice underneath that asks you to close your eyes, or to stand still. Do these things. If you don’t allow yourself to take all of it in, you’ve missed the point, like looking at the corner of a Basquiat, without standing back to examine the whole canvas.

For every album on display, there is a selection of Björk’s lyric books, as well as costuming or other imagery from videos and album art. If you’re there for a swelling history of “Björk Stuff,” you will probably be disappointed by how little of it is there. A lot of it is chintzy, including mannequins of the singer dressed for each era — the swan dress is on display — and particularly head-scratching is how pre-school mural-esque the Volta room is painted. But the real intimacy lies within the narrative playing in your ears. Her biography and songwriting process is told through how she saw herself in the world, with her heart, both figuratively and literally, as her primary guide to understanding it. Her heart is curious during Debut, discovering love during Post and Homogenic, bathed in it throughout Vespertine, motherly for Medúlla and open to the strong embracing the weak with Volta. It’s when the narrator begins to talk about “the girl” discovering emotional disparities in every heart that you realize that this is not a collection and celebration of Björk’s music, but a brand new piece of art, charting her growth into womanhood and motherhood and the development of romance that will ultimately fall apart. 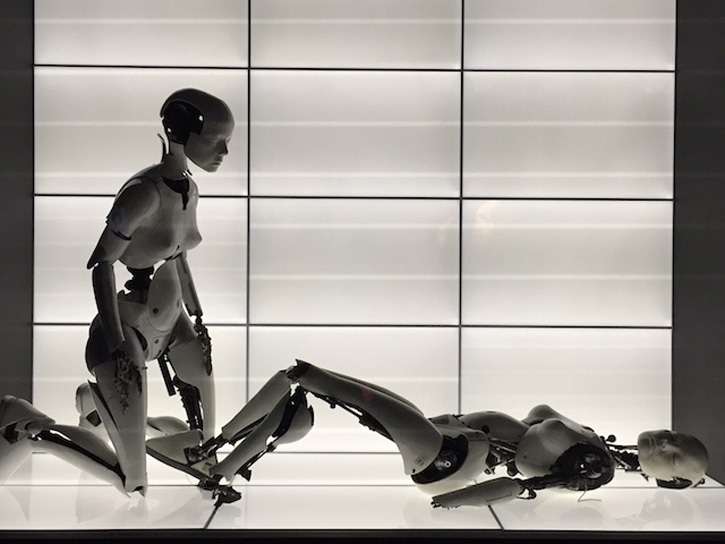 There is not much that is visually stunning about ‘Songlines’, except for the Homogenic and Vespertine rooms. The robots from the ‘All is Full of Love’ video, as well as the intricate lace Alexander McQueen gown and music box made by her former paramour Matthew Barney from the ‘Pagan Poetry’ video, are all on display. Even there, though, you get more out of watching a spinning Björk mannequin if you submit yourself to the audio. If there were fewer people in each room at a time, the desire to move quickly to the next may be quelled and the viewer might be encouraged to stick around.

Where the museum understands this necessity is in the screening room for the ‘Black Lake’ video, the highlight of the entire exhibition. Filmed over the summer at a freezing volcanic cave in Iceland (according to Biesenbach) and directed by Andrew Thomas Huang — the artist behind Vulnicura’s vinyl packaging — the clip is a gripping two-screen piece. In a pitch black room, covered in fabricated barnacles to simulate your own presence in the cave, two barefoot Björks yearn to each other for a love lost. It has an emotional depth that can’t be described, but her performance begs for empathy at the very least. Watching her actually sing the heart-crushing lyrics makes her despair even more palpable.

It is also possible that ‘Black Lake’ was recorded before Vulnicura was being worked on. After Biesenbach explained that Björk had only agreed to show at MoMA if the exhibition would not just be about the past — he said she only likes looking toward the future — the intention of both ‘Songlines’ and ‘Black Lake’ as Vulnicura’s centerpiece became a little bit more clear. The project began in 2012 and Biesenbach asked her to imagine where she would be in three years; that would be the nexus of what she showed. Cohesively, if you start with ‘Songlines’ and make your way to ‘Black Lake’, a romance from its wide-eyed beginning to its molten end fully comes together. I asked Biesenbach if ‘Black Lake’ was originally a piece made for MoMA or if she had already finished the album. While he was unsure, his answer made it seem like Vulnicura came together as a culmination of her work with the museum. Björk, as a whole, is an exhibition about processing, and it works best if you give yourself over to it and allow yourself to process, too.