The star joins Lionel Ritchie and the Dalai Lama on Glastonbury’s growing lineup.

Kanye West will headline Glastonbury’s 2015 festival. The news was confirmed by the festival via Twitter, making him only the second hip-hop artist to headline the music festival (the first was Jay-Z). West is the second headliner to be announced for the festival, the first being the Foo Fighters.

No news has come regarding what a live show for So Help Me God will look like, but judging from the fiery Brit Awards performance of ‘All Day‘ we can expect something good. The full Glastonbury lineup will be available this spring.

Update, March 18: So, the fallout. After Kings Lynn resident Neil Lonsdale’s petition to stop West headlining Glastonbury went viral, attracting over 30,000 signatures, the NME interviewed him. Turns out he’s never actually been to Glastonbury, though he did “hurl his iPhone across the room” when he found out the news. “Two years ago we had The Rolling Stones playing the Saturday night, and this year we get Kanye West?”, he bleated. “It’s an outrage!”

Lonsdale’s issue with West wasn’t about race, he claimed, though he did find Kanye’s BRIT Awards performance, where he was flanked by several members of the grime and UK rap world “just threatening”. “Kanye’s a big boy”, he concluded, “I’m sure he can take a bit of banter.” Can’t we all.

The internet being the internet, there’s since been a succession of pro-West, vaguely anti-Lonsdale petitions. “CANCEL THE THIRD HEADLINER REPLACE THEM WITH MY FAVOURITE BAND OF ALL TIME” is currently riding high on 60 sigs, while one advocating replacing the entire Glastonbury line-up with the Yeezus tour is smashing it on 600+.

Our favourite though? Alan Partridge to Headline Glastonbury in a Reasonably Priced Car.

Festival founder Michael Eavis, meanwhile, simply had this to say: 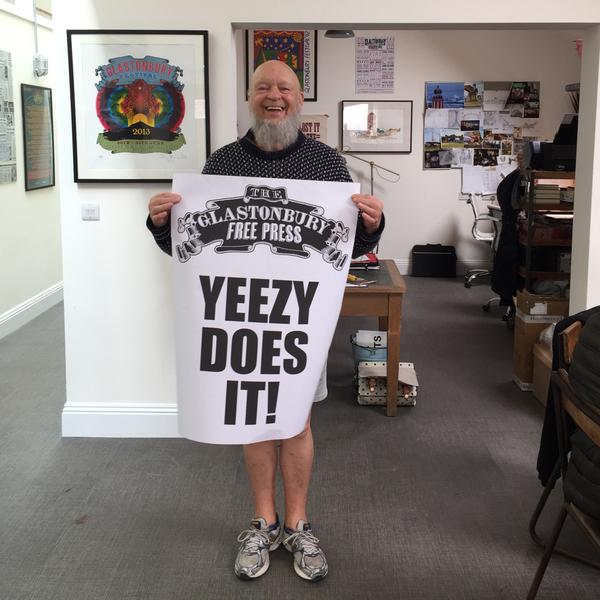