OiOi returns to London’s Fire on May 1 to celebrate turning one.

After hosting the likes of Slimzee, Preditah, El-B, Girl Unit and Egyptrixx in its first year, Oi Oi has announced a massive birthday bash headlined by veteran MCs D Double EE and Footsie, aka Newham Generals.

Joining them on the bill are UK garage figureheads Sticky & Scott Garcia, playing a two-hour, classics-heavy set as Foundation, young talent Amy Becker, who’s been a staple of MistaJam’s Daily Dose mix series over the past year and grime boss Spooky with one of his reliably roof-raising, high-octane sets.

Finally in room two it’s a takeover by Tumble Audio, the Nottingham record label turned club night with a taste for big basslines and a hybrid take on grime and garage.

OiOi takes place at Fire in Vauxhall on May 1 from 1opm to 6am – keep up with the latest announcements on Facebook and grab tickets from Resident Advisor. 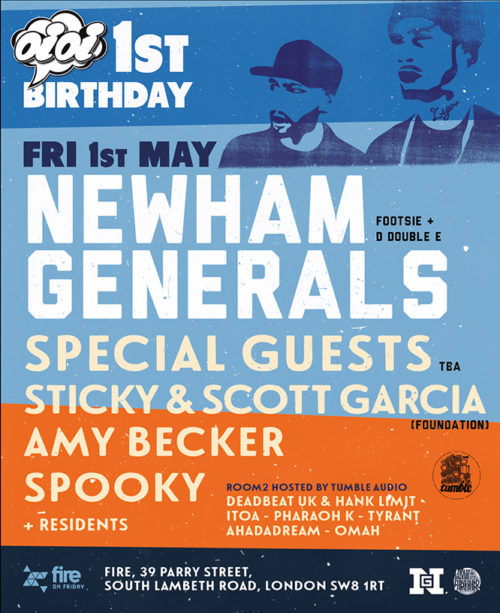