Late last year, Mike Simonetti confirmed that he had split from Italians Do It Better, the label he co-founded with Johnny Jewel, to focus on a new label, 2MR (“Two Mikes Records”), a collaboration with Captured Tracks founder Mike Sniper. 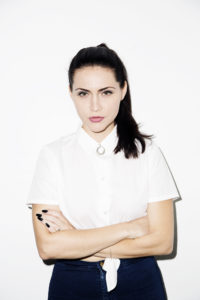 He also announced a new project, Pale Blue, that features Silver Hands lead vocalist Elizabeth Wight. The pair first connected when Simonetti was asked to remix Silver Hands and — struck by the strength of Wight’s voice — he reached out to collaborate.

The project was born as Simonetti dealt with his exit from Italians Do It Better, the devastation of Hurricane Sandy and a handful of personal crises. But while Pale Blue was born amid turmoil, their debut album The Past We Leave Behind is anything but tumultuous. Rather, it’s a lush, meditative dance album about loss, coping and new beginnings that touches on ambient, techno, drone, dream pop and more.

The Past We Leave Behind is due out on April 14 via 2MR. Along with streaming the album below, read our interview with Simonetti about the project, the state of dance music and what to expect from 2MR.

What was it about Elizabeth Wight’s vocals that made you say, “I have to work with her”?

When I heard her vocals, I felt like I had tapped this untouched resource. Her range is incredible. She can sing anything, and it doesn’t sound cheesy like a Broadway singer or some shit indie rock vocalist who needs to lip synch live because their voice isn’t strong enough. The fact that she’s been in LA this long and unknown baffles me. Actually, it doesn’t baffle me because it’s LA.

How has the new project and album helped heal the wounds of 2012?

The album is about loss and new beginnings. The record started off as a solo record before I met Liz, and the record was heavily influenced by Hurricane Sandy, but then all this shit went down with Italians Do It Better right around the time I met Liz. So it’s sorta both at once.

The IDIB drama was rearing its ugly head around 2012 anyway… you know, the tension was there. So with this album there’s a lot of that tension coming out from my end. But Liz came in and aired all the negative shit out. That’s why it’s so ethereal yet so dark. It’s a good balance.

I’m glad that madness is all behind me, but you can hear it with this record. Our new songs are much more positive sounding; there’s not as much noise and distortion. It’s like the sun came up or something.

Everyone is making dance music now aren’t they?

The album is described as a “response to modern dance music and its constant fluctuations” — can you expand on that? What in the dance music world are you unhappy with right now?

Everyone is making dance music now aren’t they? Every day there’s some new thing, some new artist who is “changing the game” … but then POOF! they’re gone. The idea with Pale Blue was to sequence a proper album similar to the way you would listen to an album in the 1980s. (Album-oriented dance music — there’s a new genre for you. You can file it next to Night Bus.)

There’s a beginning, middle and end. There was never a “single” or anything. When we released the singles, I was not expecting this huge response because the songs work better together as a unit. But the kids have no attention span these days with their social media and selfie wands… so the real struggle will be getting someone to sit down and listen to the whole thing. It’s a long record; there’s a 7-minute drone track in the middle (that was cut down from 16 minutes) — maybe that was a bad idea?

Anyway, I’m not “unhappy” with dance music really. There’s so much interesting stuff out there actually. If anything, there’s so much stuff it’s impossible to keep on top of it all, it’s so hard. Thanks a lot, Steve Jobs.

Any other plans for Pale Blue and 2MR this year?

There are new songs, and we’re working on the live thing, which will be either really cool or a huge disaster. Either way it will be interesting to witness, I guess.

I am very excited about 2MR. We already have a solid line of releases set. Full lengths, one-off 12s, unknown artists, some well known artists, maybe some reissues? I don’t want to blow my wad early and start announcing stuff because it’s more fun to keep people waiting. But this label is going to be great: no bullshit, no fashion, just tracks for days.