Over 120 exclusives releases are up for auction before next week’s Record Store Day.

We’re still 10 days away from this year’s vinyl bonanza and it looks like the scalpers are getting in there early. One cynical seller has already listed a large portion of this year’s RSD releases on eBay for ‘buy it now’ prices of $99.99 and over.

After Reddit users pointed the finger, the seller stated that items would be shipped in the days “following April 18th, 2015 Record Store Day”. It’s not clear how the seller has such complete access to the releases, but it’s safe to say that without links to a record shop it would be risky business to rely on grabbing the whole lot in the scrum on April 18. 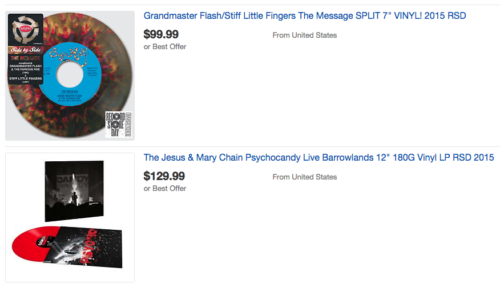 This behaviour will no doubt contribute to the growing debate around Record Store Day, with indie labels and vinyl manufacturers recently claiming the event is having a detrimental impact on the industry, as major labels clog up pressing plants with huge runs of reissues (charges that RSD organisers have rejected).

But as The Vinyl Factory points out, if you’re willing to pay $99.99 for an A-Ha picture disc then maybe it’s just a little bit your fault too.