Turns out it’s not just internal problems the Wu are suffering at the moment.

On a recent episode of Divorce Court, a man accuses his wife of sleeping with the entire group (we’re guessing he just means the key members here, not the various legions of Wu affiliates that exist, or even worse, Cappadonna), after going backstage at a Wu show.

“She gave Wu some Tang”, he says, in a solemn tone. He actually says this.

According to the woman, no “Tang” was given. She calls the Clan gentlemen, and claims that she “kept her lady points together”. “I met Wu-Tang, I went back stage and got on their tour bus, I went back to the hotel and hung out all night,” she says. “It was amazing!”

Watch the video above [via XXL].

Update, April 16: Method Man himself has said the story is bogus.

Wu-Tang’s tour manager Simon Green posted a photo from the episode on his Instagram, and Method Man cleared up the matter in the comments. “That shits fake I would’ve remembered her,” he wrote. “I would’ve spotted her and said which one of u bitches brought the chaperone… She’s clearly an old-er-thot. And should know better with her old ass.”

As XXL points out, she really doesn’t look that old, but if it saves her ass from the wrath of Divorce Court then we’ll let it slide. 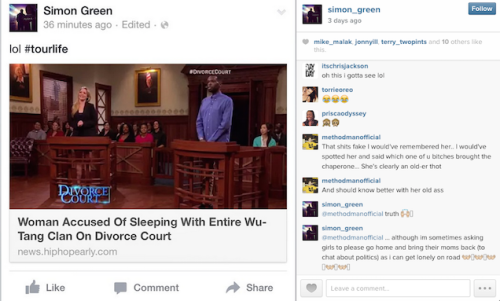