The band wrote on their website: “Some very lucky people who purchased U2’s Songs Of Innocence during a recent record store release found instead a copy of TOOL’s 1992 OPIATE EP inside. Kind of makes you believe in mysterious higher powers doesn’t it.”

With the sheer volume of Record Store Day releases there’s bound to be the odd slip-up, but not all of them allow you to have a chuckle at U2 fans.

Several copies of the band’s RSD novelty, a vinyl pressing of last year’s straight-to-your-iTunes album Songs Of Innocence, somehow ended up with Tool’s 1992 Opiate EP inside the sleeve.

Dianne Delahunty spotted the error when she picked up her vinyl from Banquet Records in Kingston. Perhaps there’s a Tool fan out there with a U2 record to swap?

In other U2 news, Windmill Lane, the studio where the band recorded their early albums, was demolished this month. 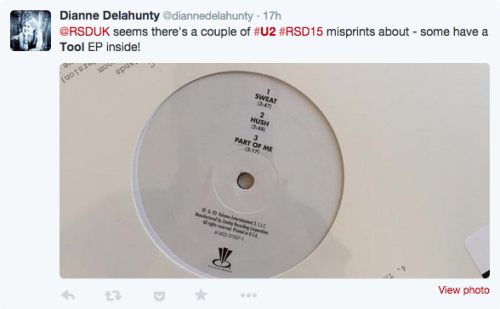