Fade to Mind revisit Cut 4 Me, react against nostalgic R&B and ready their 2015 takeover

When we named Fade to Mind the best record label of 2013, it seemed that the L.A.-based collective was just getting started.

The year saw the release of EPs and mixes by Kingdom, Nguzunguzu, Bok Bok and more; a continuing influence in underground club music; and, perhaps most significantly, the release of Kelela’s groundbreaking Cut 4 Me mixtape. But despite their success, it proved to be a pace that was too hard to maintain: in 2014, the label only released MikeQ and DJ Sliink’s collaborative EP and teamed with Night Slugs for a joint reissue of Dat Oven’s Icy Lake.

The brief period of quiet appears to be over. Last month, Fade to Mind released a deluxe edition of Cut 4 Me, complete with remixes by Kingdom, Jam City, Girl Unit and others. Kelela’s songs, remixed and re-edited, have long been staples of Fade to Mind sets and mixes; the deluxe edition seems to close a chapter, both for the label and for the singer, who has a new EP and album in the pipeline. When speaking with label co-founders Kingdom and Prince Will, Cut 4 Me stands out as a milestone that has helped define Fade to Mind.

“We always wanted to do vocal projects, but the first few years was about the friends getting together and figuring out what our sound was,” says Kingdom. Prince Will had spent the label’s first year in Texas, focusing on “bigger picture” issues, both financial and conceptual, and when he moved to L.A., his first goal was to find a vocalist that could “spearhead” a project. One year after Kelela met the Fade to Mind crew, Cut 4 Me was released, an all-hands-on-deck effort that tapped all of the label’s resources and focus.

“We didn’t know what to expect from the outcome, but it definitely was a turning point,” he says. And while it was important to release the mixtape physically — both for fans and the Fade family — Kingdom says he wanted all the “new elements” of the label to fall into place first, even though the remixes had been ready for some time. “To us, it’s a classic project, and the timescale doesn’t matter as much.”

The label always wanted Cut 4 Me to have “more visual power,” and while that meant new album artwork, it also meant toying with other digital formats. The reissue also saw the launch of cut4.me, an interactive site that not only streams the remixes, but animates Kelela as a digital avatar, shows the lyrics and lets users alter the environment.

Prince Will says the site — which was inspired by “all these apps that you can record a vocal and it animates a character” — also came from frustration with the predictable cycles of online music journalism that often make things like videos disposable, hamstrings writers and cuts the audience out of the experience. The goal was to “make something better than SoundCloud,” and while it didn’t quite do that just yet, the label isn’t done experimenting. As Kingdom explains, “We’ve always tried to be a visual label, but the output has been really slow and low, mainly because of how labor intensive our ideas have been.” 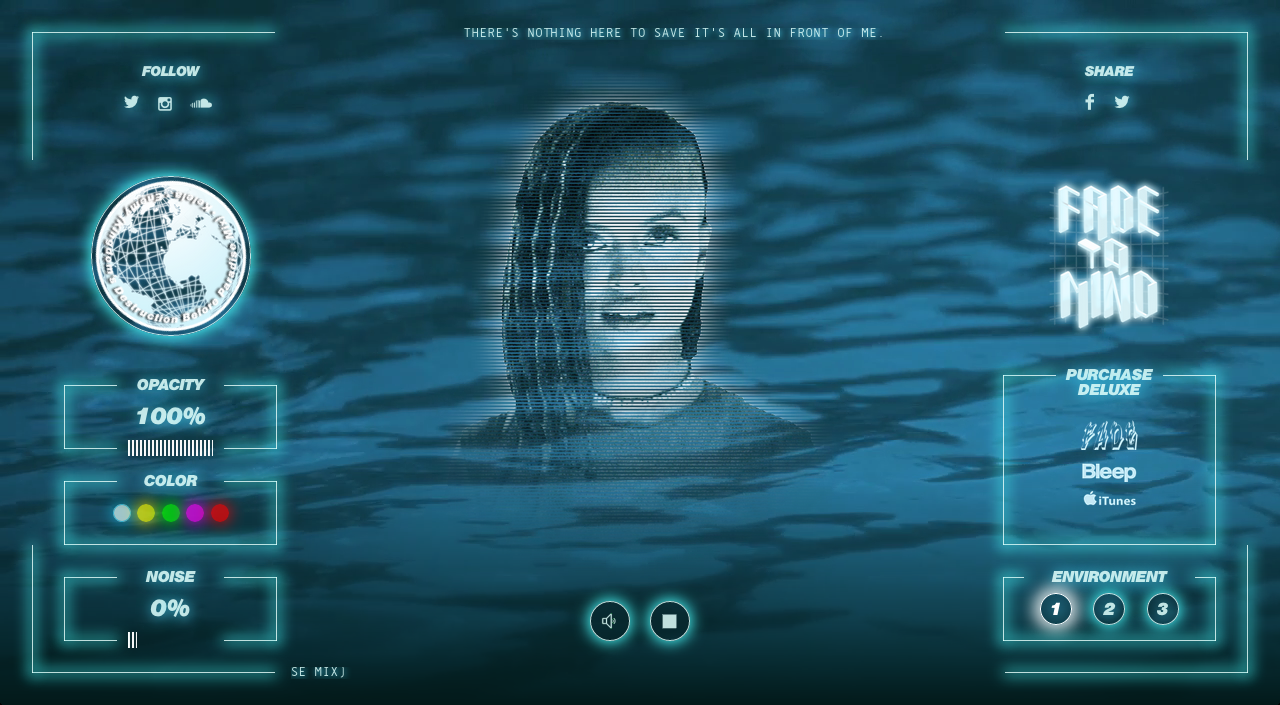 “To us, it’s a classic project, and the timescale doesn’t matter.”Kingdom

After the release of Cut 4 Me, Fade to Mind regrouped. “The year after that was really quiet because we were restructuring,” Kingdom explains. “We realized, if this is the type of thing we want to do, there’s so much other stuff we need to be able to do as a label.” Plus, as both label owner and artist in his own right, Kingdom recognized that he would have to step back and let others help carry the load, especially with plans for a debut album.

While a Kingdom album is still in the “formation stage,” he has “a lot of instrumentals” and a few features locked in. “The idea, for now, is an all-female album, which is something really interesting and something that hasn’t really been done,” he explains. “It’s the realization of what I’ve always been working on, which is challenging vocalists to work on different kinds of beats and rhythms, and bringing elements from pop and from radio into a more experimental club context.”

Prince Will says the album will be a “very focused statement” from Kingdom. “You’re not gonna hear the same things he’s already done. He’s always kept innovation at the forefront of his sound,” he says, “and when he has an album to spread out and show his ideas, people will really understand how innovation drives his music.” He also promises a different approach than the one tried by some of their contemporaries. “A lot of producers will have good luck with a vocalist and then deliver the same song to another vocalist,” he explains. “I don’t think that will ever happen to him: he’ll always push for a new idea for everyone he works with. You’re gonna really see how he channels their personalities.”

Between Kelela’s efforts and his debut album, Kingdom now sees Fade to Mind as a “laboratory for producers [to make instrumentals] and a label for putting vocalists in a new context.” Prince Will agrees, as the label’s producers have started to focus on vocalists. “There have been vocalists coming to the team, looking for input, executive production and co-writing,” he says. “Songwriting is now a major part of both Night Slugs and Fade to Mind.”

One such vocalist is Dawn Richard, fresh off her experimental R&B-dance breakthrough Blackheart. “She had been a fan of the Kelela tape and of some of my beats,” says Kingdom. “It started with me sending her one beat — a slowed down diva-jungle type vibe — and she loved it. She and her engineer laid down vocals and background vocals on their own. I didn’t know what to expect, but she is the most driven artist I’ve ever worked with: super humble, super confident.” He has already collaborated live with Richard at Miami’s PAMM, but — contrary to reports — she hasn’t signed with the label.

Kingdom describes Richard as a “staunchly independent artist,” but one open to collaboration. “We’re going to come in and add some structure and a slightly different sound,” he says. “That’s the kind of artist we need to work with.” Prince Will, who has been co-writing with artists for over a decade (dating back to his time in the Texas hip-hop underground), is working with Nguzunguzu’s Asma Maroof on both Richard and Kelela’s albums.

“We react against nostalgic R&B, the Amy Winehouse stuff.”Prince Will

In a few short years, Fade to Mind has gone from recontextualizing R&B acapellas to creating a context for R&B vocalists. “That’s always been [Kingdom’s] vision and endgame,” Will explains, “but it was always kind of a stretch to find a vocalist that understood the movement and the real R&B audience.” He sees continued innovation in R&B that he doesn’t find in other genres, a forward movement that still inspires Fade to Mind: “We react against nostalgic R&B, the Amy Winehouse stuff.”

The space that Fade to Mind (and Night Slugs) play in — where R&B, UK dance music and regional US club sounds cross-pollinate — is certainly more crowded than when the label began. “I remember my first DJ sets in 2006 or 2007, mixing grime and garage with R&B and stuff from the radio — in New York City it was simply not heard,” Kingdom recalls.

Still, widespread adoption of such genre-agnostic club music (to the point where “Fade” and “Slugs” have become online shorthand for the music, regardless of who’s making or playing it) has not come without its issues. “I think it’s great that there are so many people working in the genre,” he says, “but I do remember some of these producers’ old pseudonyms from when they were making hard electro and whatever the blog-genre of the moment was. But I’m completely thrilled that people are signing on to do something better and more interesting.”

“What is a little disturbing is that it feels like inside jobs and corporate alliances are what determines who gets booked and covered,” he continues. “The history of music gets written through flyers and the internet, and when other crews are getting put on, and Fade to Mind is not, it does rewrite the history a bit, and that does disturb me. I feel like we’re a little bit of an underdog, and we haven’t been written in as creators or innovators.”

Regardless of any resentment, Fade to Mind won’t be changing their approach, or following that of their imitators, especially those that don’t seem to value club music the same way they do. “There are labels that are like “this is the cool ‘hood meme’ this month, let’s put it out for free,” and that’s completely the opposite approach to what Fade to Mind does,” Kingdom explains. “I would so much sooner wait and obsess about the mix and package it so it feels like the most important thing in the world. We’re not just trying to throw this music out there for free: it does have value and it’s not just a gimmick of the month.”

This patient approach also drives two other Fade to Mind releases expected this year: Rizzla’s proper debut EP (“It’s so incredible and such a breakthrough for him,” Kingdom says) and an album from Massacooramaan, who has been quiet since his 2012 debut. In addition, Kingdom is looking to release music by artists in MikeQ’s Qween Beat collective so that it can be “another sister in our crew,” saying “there’s so much talent there, but they need a little more structure.”

After breaking through in 2013 and regrouping in 2014, 2015 looks to be another year where Fade to Mind will take a giant step forward. “Our music is still underground, but we’re going to have music that is radio-ready,” Kingdom says. “I don’t want to call our music pop music, but our version of pop music — music that is super-emotionally resonant — will continue to resonate with more and more people.”

Tags: Fade to MindKingdomKelelaPrince Will