“I’m legit one of the least homophobic guys to walk this earth,” says the repentant rapper.

Despite being accused of homophobia in the past by dotting his lyrics and statements with the f-word and other slurs, it seems Tyler, The Creator is looking to make amends of some sort. The Cherry Bomb rapper has unveiled a new T-shirt that hijacks a neo-Nazi symbol by plastering it with the rainbow colours representing gay pride.

The T-shirt uses the logo of White Pride World Wide, associated with right-wing group Stormfront, while the press shot shows Tyler holding hands with a white man. Tyler explained the meaning behind the merch on his Tumblr, saying he’d been researching white supremacist imagery when he had the idea.

“[I] asked myself some questions,” he wrote. “What if a black guy wore this logo on a shirt? Would he be promoting self hate? Would he be taking the power out of a shape? What if a gay guy wore this on a shirt? Would he promoting Homophobia? Then BAM! I Had it. Throw a little rainbow in the logo ( i still wonder, who was the guy that said a rainbow is the gay symbol? thats another article stay tuned) and take a photo with a white guy in it and we have an amazing photo. The thing that tops it off is the homo erotic tone of the hand holding, which to some degree HAS to piss off the guys who takes this logo serious. This made the photo even more important to me, because it was me playing with the idea of taking the power out of something so stupid. Or maybe my whole idea on this is stupid. Who knows, but why not try it out?

He added: “Also, ever since my career started, ive been labeled as a homophobe, simply because of my use of the word faggot. Again, trying to take the power out of something, I WAS NEVER REFERRING TO SOMEONES SEXUAL PREFERENCE WHEN USING THAT WORD. I mean, i’m legit one of the least homophobic guys to walk this earth but, most people just read the surface. But maybe someone will see this photo and say “ hey, he’s just mocking gays” or “ this has a negative undertone to it, he is still pushing this homophobic whatever the fuck it is”. What ever it is, i just wanted to give you guys some background info on the design before you purchase the shirt. You should know what you are wearing. be safe, love. RACISM FUCKING SUCKS.” [via NME] 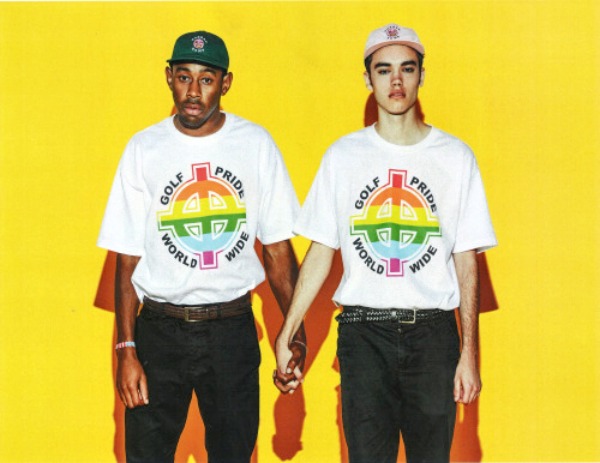