Each time Zimmerman turned it on, he had to boot the operating system from three floppy disks. In this environment it was enough effort just to play a game, let alone record music. But that’s exactly what he did, for 10 years, across three consecutive Tandy computers all running the same archaic operating system, DeskMate. This music remained unheard for decades, until he sent a demo to the Olde English Spelling Bee label who put him in contact with Daniel Lopatin, aka Oneohtrix Point Never, who is releasing it on his Software label.

Zimmerman had originally been convinced to buy the computer by his uncle, a TV repair man who loved electronics. The young Zimmerman was an obsessive tinkerer himself – his first instrument was a battery-operated Remco toy synthesizer, and he first started recording audio on a hi-fi VCR, overdubbing to VHS tape. “It’s why I started making music with the Tandy,” Zimmerman explains from his home in Brooklyn, “because I just had all these analog things lying around, and it was interesting. At the time it wasn’t state of the art, and I wasn’t pursuing that.”

To say his setup wasn’t state of the art is an understatement. When Zimmerman first started recording music there was no such thing as the MP3, let alone user-friendly music production software. The program he used was divided into a simple notator and a wave editor. “To get one note to get onto the score, you’d press the button and it would take at least two or three seconds to register,” he recalls. “You would max out a song at about 1600 notes, so sometimes I had to split songs into two pieces.”

Despite these limitations, Zimmerman’s tenacity and exploratory spirit led him to create a huge amount of strange and striking music. “DeskMate seemed to have a hack where you could cut and paste and do a lot of things really quickly,” he explains. “When I got into more experimental and drone-based music then I would make my samples extremely short and would try to make microtonal music with DeskMate. But it had extreme limitations. You could only really do a few things with a sample – lower its volume, reverse it and cut it. That’s what you were limited to.”

This period is documented on The Baltika Years, a 31-track compilation of tracks recorded from DeskMate to cassette between 1992 and 2002. It’s a collection that moves from early tracks made using the basic four samples of flute, cello and piano and clarinet that came with the software, through his experiments with hardware like the ARP Odyssey, Juno-6 and Oberheim DMX to full-fledged drum and bass stitched together with Tod Dockstader samples. These tracks are highly experimental, but in their own way, they lean towards pop.

By accident, Zimmerman’s cubist approximations of pop music seem to anticipate the fractured, A.D.D. approach of the current wave of hi-tech digital artists and producers. The 90s audio detritus of James Ferraro’s Far Side Virtual, the disembodied digital voices of Sentinel or M.E.S.H., the frantic MIDI patterns of A.G. Cook and the PC Music crew – Zimmerman’s music sounds like someone trying to deconstruct his influences and recombine them into something wilder.

As it turns out, that’s exactly what he was doing. “I came from early hip hop, and I was basically using early hip hop as my breakbeats,” he explains. “My favourite act as a kid was Run DMC, but I also liked Wendy Carlos’ Switched On Bach, the music of Arvo Pärt and Steve Reich. I was discovering so much music at the time I was using DeskMate, it was like a cornucopia.”

It feels apt that The Baltika Years is being released on Software. Much of the music shares the zoned-out nostalgia of Lopatin’s album Replica. But where that album plundered the TV advertising cues of the past and reassembled them into abstract shapes, listening to The Baltika Years is like listening to Zimmerman’s musical journal, an artefact filled with attempts to document his own life as opposed to an attempt to create a larger metanarrative.

Some of these moments are quite domestic. The sprawling 22-minute ‘Phyllis’ plays out like a surreal opera, complete with a mangled vocal sample of his mother recorded after a bad day at work. Others, like ‘Da Chopp’ – an ode to the Donkey Kong Jr. coin-op machine – are inspired by cultural objects. The ‘Pausebreak’ series of tracks – the most vividly realised of the collection – were inspired by Zimmerman’s trips to NYC’s underground raves in the 90s where he was turned on to drum and bass, an interest that continues today.

“Drum and bass was just an instant like for me,” he says exuberantly of the period when he would go to Temple Records, the only place to buy drum and bass in the city at the time. “It was just so different from the hardcore techno.” Though Dillinja’s ‘Cape Fear’ is among his favourite drum and bass records, he admits to having a soft spot for more contemporary – and commercial – artists like High Contrast and Pendulum. Why? “Well, it’s not dark.” Though Zimmerman’s music is obfuscated by low bitrates and tape fuzz, there’s always a bright undercurrent waiting to get out.

It’s something that seems to come from his early love of video games. You can hear it in the Japanese RPG string plucks of ‘Housed!’ and ‘Crystal Lake’, which sounds like the half-remembered theme to a malfunctioning coin-op machine. “I was so hooked on video games as a kid,” Zimmerman admits. “I really loved the laserdisc videogames, the ones that looked like anime – like Dragon’s Lair. But it was a big addiction, and I realised that there was no lasting joy or pleasure – once the game was turned off I just kept thinking about how I would find the last coin in the room I was in.”

Rather than continue to sink his time into virtual worlds, Zimmerman pressed ahead with creating his own musical ones. After dispensing with DeskMate in 2002, he continued to make music, writing and singing what he describes as “weird existential pop songs.” He also studied at CalArts, which helped him to better realise his musical ideas. “I felt like I made up for lost time and made tons of different projects because I was unable to do it in the past,” he explains. “I feel like I’m making up for lost time every time I make music now.”

Currently, Zimmerman is working on a live show for The Baltika Years. He’s traded the impractical DeskMate for Ableton, but his setup still has a homespun feel. As well as a Yamaha TX81Z FM synth and a Kawai K1m, he’s running software synthesizers and effects self-programmed using an open-source language called ChucK. One is a plug-in he made specifically so he can make all his audio “sound like it went through a mastering studio.” 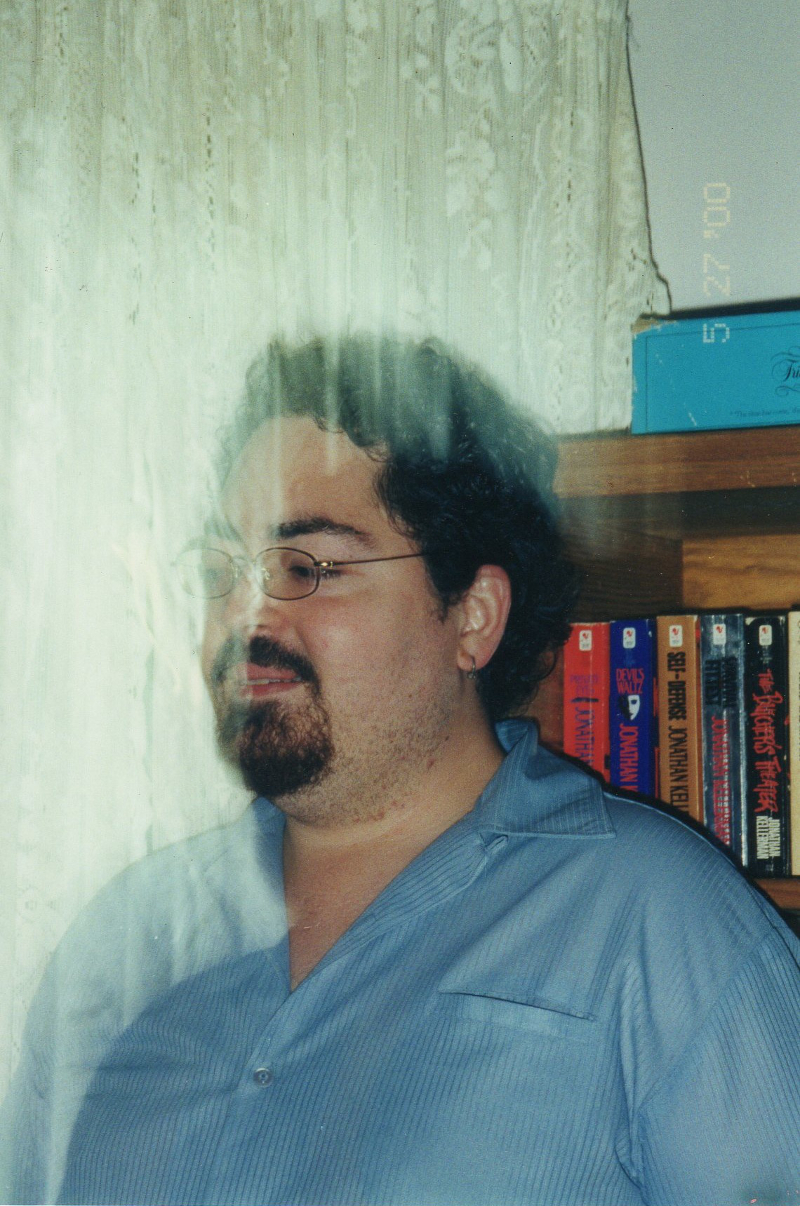 “I feel like I’m making up for lost time every time I make music now.”

It’s all part of Zimmerman’s vision to make the live version of The Baltika Years bigger and bolder than the original recordings. “I’m aiming for a power electronics version of it,” he says boldly, “something thick and much more inspired by John Adams’ Hoodoo Zephyr album. I’m also influenced by the soundscapes Ulrich Schnauss creates – I want to flesh it out in colour, and make it vibrant and 3D instead of flat monochrome. I’m trying to take it to a new level that I wasn’t capable of back when I originally made these pieces.”

Zimmerman’s first live performance of The Baltika Years is a radio performance on June 9 on WNYU, followed by an appearance at Brooklyn’s Northside Festival on June 13. “I’m looking at it as a really fun thing to do,” he says. “I put The Baltika Years aside for so long and now it’s coming off the shelf – to a degree I thought a lot of what I was doing with DeskMate at the time was just sketching, and that I was going to make a real piece out of it someday.”

Despite those three Tandy computers being the tool Zimmerman used, they shouldn’t be used as a means of understanding his music. As an album, The Baltika Years feels more Raymond Carver than Oneohtrix Point Never, a collection of uniquely American short stories that offer a stepping stone to something more complete. “I know it’s a big thing now with computers and nostalgia, but I don’t really yearn for those DeskMate years,” Zimmerman says. “I was always wanting it to do something else that I couldn’t, and to me that was like hitting a brick wall. The DeskMate was like training wheels for me.”

The Baltika Years is released by Software on June 9.