Update, 14:22 BST: In a new post on his Facebook, Ten Walls has claimed that he “needs a break” from music and has “cancelled his upcoming shows.”

“Last week”, he says, “I wrote a Facebook post that was wrong and completely out of character and the result was a badly written post that was unacceptable. It was never my intention to offend anyone. I’m really saddened by everything that has happened and I would like to apologise to everyone I’ve let down, especially to my friends in the gay community, and my fans. I now need to take a break and have cancelled my upcoming shows.”

Ten Walls has had to apologise for posting a homophobic rant to Facebook.

The ‘Walking with Elephants’ producer compared homosexuality to paedophilia in a bizarre tirade on his personal page last week.

The post, which has since been deleted, stated: “I remember producing music for one Lithuanian musician, who tried to wash my brain that I don’t need to be so conservative and intolerant about them. When I asked him ‘what would you do if you realized that your 16-year-old son’s browny [anus] is ripped by his boyfriend?’ Well he was silent.”

Gay Star News reports that the Lithuanian musician, real name Marijus Adomaitis, went on to say in “the good 90s… these people of different breed where fixed”.

He also compared homosexuality to child abuse by Catholic priests: “One of my first gigs in Ireland, on my way to [my] hotel I saw a church with a fence decorated with hundreds of baby shoes. Naturally I wondered why? Unfortunately a priest’s lie for many years was uncovered when children were massively raped. Unfortunately the people of other breed continue to do it and everyone knows it but does nothing.”

Adomaitis later said sorry for the rant, writing: “I want to apologize for the former post in my account. I am really sorry about its insulting content which does not reflect my true opinion. I hope this misunderstanding will not provoke any more thoughts and opinions. Peace.”

Fort Romeau has since decided to pull out of supporting Ten Walls at Koko in London later this year. “While cancelling one gig is hardly going to change the world, it does stand as a personal rejection of bigotry, fear and intolerance,” he wrote on Facebook. “It’s easy to romanticise electronic music culture and imagine it as a bastion of social liberalism and progressive ideology but the reality is that it simply reflects the larger social context where homophobia and (particularly) sexism are normalised and worse, codified into law.”

Lithuanian filmmaker Romas Zabarauskas, who is gay, said the incident had “really shocked” a lot of Ten Walls fans. He told Gay Star News: “I am happy he apologized but it doesn’t explain what happened and he doesn’t explain what he really thinks about LGBT people. In Lithuania we are now considering same-sex marriage and partnership so we need support from famous people.”

My one Ten Walls record now looks like this – pic.twitter.com/XPSdiKCAH5 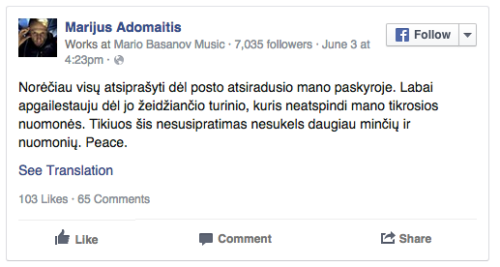