“No plug-in can replace you”: Mocky balances old and new with a little help from his friends

For over a decade, he’s worked with the likes of Feist, Chilly Gonzales, Jamie Lidell and Kelela — singers and songwriters who have raced towards the bounds of their respective genres. Over that period, Mocky has also been an active solo artist, exploring a range of electronic music before turning towards jazz and pop.

His fifth album — and first since 2009 — continues that drive: Key Change (due out June 30) is a gorgeous, gentle blend of songcraft that recalls classic pop and soul records but still feels decidedly modern. While he played nearly all of the instruments on the album, collaborations are key, as they have been throughout his career: Feist, Gonzales and Kelela contributed, as did musician-to-watch Moses Sumney and multi-talented Flying Lotus collaborator Miguel Atwood-Ferguson. For Mocky, these musicians aren’t hired guns or industry acquaintances: they’re family.

“I have a habit of sniffing out musical family wherever I go,” he says over Skype from his Los Angeles home. Previously, he lived in Toronto and Berlin, places where young artists could survive and thrive, and when he decided to leave Berlin, he needed to find that sense of “critical mass” in his new home. “L.A. had it — the feeling that there’s space to create your own reality,” he continues. “People are slowly catching on to the real scene that’s developing out here: it’s a legitimate, thriving place where you can make a credible record.”

He decided to return to the solo sphere about six months ago, and began work on Key Change, often writing and recording songs right before other people’s sessions. The record represents a return to his “natural way of doing things… getting back to that real feel of tape, but in a modern way with a modern feeling.” The title, along with its musical meaning, is a metaphor for the human element in modern music. “You can change the key by pressing a button, but the reasoning behind changing keys takes a certain human intention. At its essence, it’s a really human thing to do.” 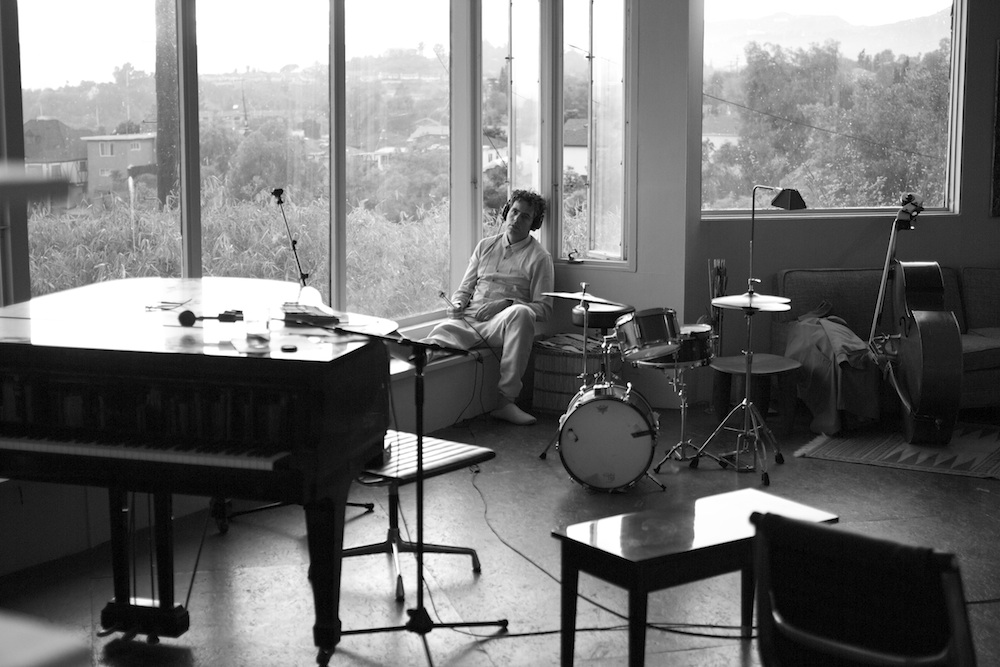 “Most of the music we hear is contained inside a box — it’s never an actual vibration.”Mocky

While he has worked extensively in electronic music, Key Change was crafted with acoustic instruments, partly in response to current trends. “Most of the music we hear is contained inside a box — it’s never an actual vibration,” he explains. “It starts its life as ones and zeros and ends its life in your earbuds — it never touches fresh air.” Even when sampling and editing in Pro Tools, he started with live instruments, musical notes that — in a sense — “never existed before.”

But he’s no Luddite. “I wouldn’t do this album straight to tape. There is some smoke and mirrors involved,” he admits. “I wanted to create a record that sounds like it should be sampled — that’s a sweet spot for me. It’s about building the tracks up so they have a one-of-a-kind-sound, so that no plug-in can replace you.”

While using modern technology, he often looked to the past for writing and recording techniques. Rather than the featured vocalists of a pop record, Key Change was recorded with group vocals, like a jazz record (although astute listeners might be able to pick out individuals here and there). Likewise, Mocky used a composing technique favored by Duke Ellington, writing with specific performers in mind. “Even if it’s a shaker part, you can make the right rhythm happen.”

Ellington is not the only jazz great Mocky had in mind while making Key Change. Inspired by a story of Miles Davis writing music on a napkin on the way to record ‘Blue in Green’, he wrote ‘Time Inflation’ [premiered below] in the car on the way to the studio — napkins replaced with Voice Memos recorded at every stoplight. In the hours before a studio session for another artist, he tracked the entire song (“It was the fastest I’ve ever recorded anything”). Combining the technique of a legend with the technology of today was humbling: “Can you imagine if Miles Davis had Pro Tools?”

“Can you imagine if Miles Davis had Pro Tools?”Mocky

In kind, Mocky sees Key Change as “a modern day, instrumental jazz composer’s record.” It’s a form that is having a bit of a moment, with Kamasi Washington’s The Epic and Donnie Trumpet and the Social Experiment’s Surf. “There’s never been a better time to release something that’s basically jazz, but that isn’t oblivious to everything that’s happened for the last 40 years — jazz that’s not totally irrelevant,” he laughs.

“It’s all about timing: it can be incredible music, but if the musical horizon isn’t conducive to that kind of sunset, it’s not going to happen. You have to be aware of what’s going on around you,” he says. It would seem that the current musical horizon might be conducive to Key Change and the albums by Washington and the Social Experiment. “I’m applauding anyone who is being super creative and challenging “the machine” and finding ways to keep humans in the picture.”

The human element — or lack thereof — in modern music is a frequent topic in our conversation. He recalls a recent visit to a music school. “It was a gloomy, dark place and there were 25 guys with headphones on, in silence, working in Ableton,” rather than the idyllic scene that he was expecting (“children playing and pianos tinkling”). This change in the way music is created has obviously affected how music sounds. “Everything is so loud and maximized with the dynamics taken out of it, or it’s being pitch-corrected. Everything we know about music is now being filed under ‘mistake’,” he laments.

Key Change, on the other hand, was “a bit like going off the grid,” both musically and in the industry sense. “The beautiful thing is writing and working with people, and then they collaborate on your stuff — it’s like a utopian situation,” he says. “It’s true musical friends doing interesting things. We all have our own worlds, but we overlap in beautiful ways.”

In Los Angeles, those musical worlds often have physical manifestations, whether it’s Low End Theory or Fade To Mind parties, or the Hotel Café scene of the early aughts. For his part, he started a monthly night, Mocky and Friends. True to its name, Mocky brings in his musical family — Feist, Kimbra, Lianne La Havas, P. Morris, etc. — for something that resembles a living room jam session. “People have told me that this is exactly what L.A. has been needing,” he says.

Mocky and Friends is held at the Ace Hotel in Downtown Los Angeles, which was originally built as the home of United Artists, the studio and theater formed by Hollywood legends Charlie Chaplin, Douglas Fairbanks and Mary Pickford. It seems appropriate that part of the city’s musical renaissance is happening at one of the sites where its first — and most notable — creative scene was born. “It feels like it’s time for something new, out of the ashes of what we thought the city was.”