Featured Stories I by Martin Guttridge-Hewitt I 26.06.15

Film has long been considered a language. But what if the dictionary no longer fits the purpose?

That’s the problem that faced video artist Doug Aitken when he returned from an epic 4,000 mile rail ride through America. At various points in the journey he was joined by the likes of Patti Smith, Giorgio Moroder, Thurston Moore and Ed Ruscha. Some stayed for mere hours, others several days. Some made edible art from cacti in the desert, others gave musical performances in the centre of huge cities. The idea being that the odyssey was a blank canvas, on which the artists could draw whatever they wanted.

It spanned the Atlantic to Pacific coasts, and after the trip was over the director found himself in the enviable position of having captured every precious second on camera, but faced the impossible task of condensing this down into one hour. The result is Station To Station, a film comprising 62 one-minute long vignettes, each showing a different person in a different place, crafting something very unusual.

Starting tomorrow, Station to Station sets up shop at London’s Barbican. It will house artists from the worlds of music, visual art, graphic design and film both indoors and outdoors, creating a “living exhibition” of sorts. The show takes place from June 27 to July 26, and features Suicide, Terry Riley, Boredoms, LoneLady, Nozinja and more, as well as the aforementioned film.

As well as this, The Vinyl Factory’s mobile pressing machine, The VF Press, will be present, recording performances and pressing them to limited vinyl on-site. The press will be in operation from Wednesday to Sunday every week.

Keen to learn more, we asked the director to expound on how the project began.

“It’s about opening the door to find yourself in a different place every day.”
Doug Aitken

Before watching the film, it’s difficult to understand what it’s about – other a train journey across the US with a host of famous faces. Can you explain a little more?

Well, it’s a very unusual film. Every minute tells a new story, about another person in a new place. So what you have in effect is like a cultural particle accelerator. But all these pieces become one thing. It’s not something we could tell in another way. It’s basically all these portraits of the creative landscape – what we are now and where we’re going.

We really looked to democratise art and music – it’s not about celebrity, commerce, or anything, it’s just about making things. And people were enthusiastic to embrace that because it’s so collaborative. It’s an artist-driven piece of work, rather than it being the music industry trying to sell records or downloads, an auction house selling paintings, or something like that. It’s basically non-capitalist, and instead goes back to the roots and purity of making things.

So, one minute you have Suicide, one of the earliest electronic punk outfits from the 70s, who create this extremely involved, impromptu live set, just making it up on the spot. Then you have Ariel Pink, just riding the train, writing songs. Giorgio Moroder used the sound of the train itself as an instrument. Then you have Liz Glynn, the great LA performance artist, who took this nomadic tent around, and set it up at stations we called at on the way; people would walk in there and she’d be describing deep physics of the universe or something, set to a strange noise.

That’s a huge variety of situations. How are these all tied together?

The way we live now is kind of this enormous kaleidoscope of voices and experiences, that’s the beauty of being alive right now. So that’s what I was trying to sum up. That’s the story. It’s also about giving people the opportunity to do something, anything, that they had never done before. A platform of new possibilities to be used in any way.

The format, with 62 one-minute “moments” – were you worried this would feel too abrasive or staccato?

For me, the film moves like a musical composition. I think it’s one of those films that you just kind of fall through, from one scene to the next, and you move with that, you don’t want it to end.

We premiered it at Sundance Film Festival, and the reaction from a lot of people was interesting. Afterwards they were still inside the film. I remember this grey-haired hippy guy coming over to me and saying “Woah, man, that is a heavy head film.” I asked what he meant, and he replied “I haven’t seen a film blow my mind like that in some time.” I’ll take that as a good response.

The pacing reminded us of the momentum of the journey itself. Was that intentional?

Yeah, and it’s partly saying maybe it’s time to experiment with film itself. I mean, whilst we’re having this conversation you could be checking texts, looking at a screen and the information on there. Multitasking. So what if we had shorter films, but more of them, as oppose to a more laborious story? It’s also about the train’s movement, and the lucid stream of thoughts you have when you’re daydreaming. That’s what this is about.

How much did the locations you stopped at impact on the content?

You’re working with the big cities, such as New York, or Los Angeles. But, at the same time, you’re staging a happening in the New Mexico desert, and each of those places is interesting and inspiring for different people.

The way I tried to programme it all, from the start, was the opposite of a tour. I didn’t want a bunch of people just travelling together making music. Get in a band, and get on a bus if you want to do that. Instead, it had to be changing all the time.

Patti Smith only shows up in Minneapolis. Beck’s involved in Barstow, California, in the middle of the desert with a gospel choir. I mean, Barstow California is really just a freeway offramp in the middle of nowhere. It’s on the old Route 66, which has since been bypassed by a giant highway. Now it’s a place with lots of empty hotels, but there are tracks, and a station. So what if you reactivate a place like that?

This project is defined by the places, it’s about opening the door to find yourself in a different place every day, but also opening the door to the people in these places, for them to get involved. I thought if we could capture those moments – not necessarily when a musician turns up, but a hitchhiker, or a Native American Indian living in a reservation we pass by – and have a conversation with the people who just show up it becomes a living project, creating and making itself.

A lot of people, when they make a film, they create a set, but for us the journey was the set. We returned back to the studio in Los Angeles and realised that with all the footage we had a documentary would never work – it needed its own language, a new kind of structure. 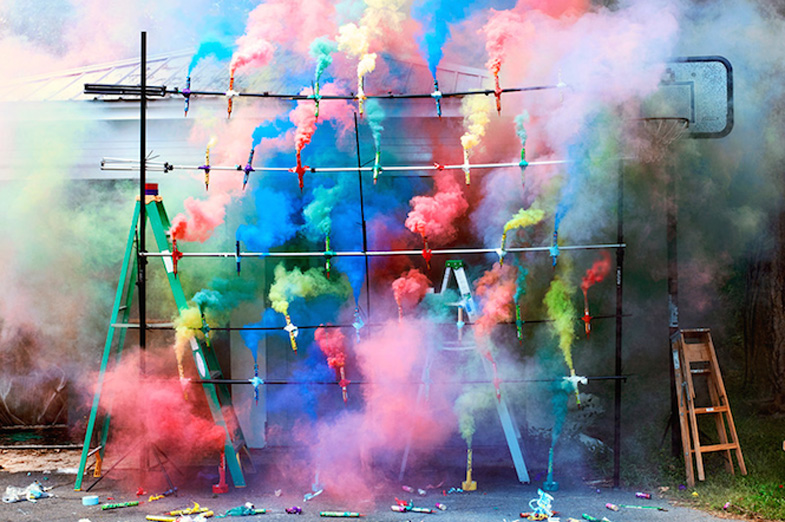 “You can’t come in one day and say ‘I’ve seen it before’, because it changes every day.”
Doug Aitken

How did people decide which parts of the journey to join you on?

It was kind of different for everybody. They all had different schedules, some could only do a day, others were more open. It kind of collaged itself.

Patti Smith, for example, really just said “I wrote this song, and I’ve never played it live, and I really only want to sing it in Minneapolis-St. Paul.” She’s Patti Smith, and if she only wants to play it there then that’s cool. I think she saw it as a pretty lesser-known location, and there’s a history to it she found interesting. But I really like when things are open like that. People come in with their own rationale.

It sounds like a challenge, logistically, with plenty of potential for mistakes. But then surely those mistakes add to the idea that this project is alive?

It was a logistical nightmare, yeah, but you’re absolutely right. Part of what we see in culture is this perfection – all the creases are ironed out and stuff. I think our culture is often inhumane, we really need some rawness in there too.

The film coincides with a month-long Station To Station event at the Barbican in London. What can we expect from that?

We wanted to make a living exhibition. A moment in time. So every artist is doing something different, some are using the space for two days, others two weeks. I love the idea that it’s a live exhibition, with real life people, and it’s constantly creating itself, like a living organism.

You can’t come in one day and say “I’ve seen it before”, because it changes every day. And that goes back to what’s happening in culture. A movement towards seeking out where we’re all going. Culture is what we have to reflect and grow up on. For me this is the perfect counterbalance to the film – which is cemented in time, and committed to its final form. The Barbican, by comparison, is something that can never be re-seen or repeated. Once it has happened, it has happened.