The tribute to the house pioneer lasted over a year.

The Chicago Reader reports that a wall in Logan Square dedicated to Frankie Knuckles is being buffed clean. The mural lasted 415 days without interference.

“They came around with buffs and buffed the Frankie Knuckles wall,” said local graffiti artist FLASH ABC of the Artistic Bombing Crew, who chronicles graffiti projects in the neighborhood. “I saw brown [paint] on the wall… It was city brown.”

The mural is scheduled to be completely covered by Saturday — not with paint, but with brown cement. The vibration caused by nearby trains is causing significant water damage to the shop where the wall is located, and covering it in cement is part of a maintenance project.

“This to me was more about Frankie Knuckles, but the wall had its 15 minutes of fame,” said Eric Merlos, the owner of the shop where the wall is located. He said that European visitors have come to take their picture with the wall, which hasn’t been hit with graffiti since the tribute was painted.

A GoFundMe has been launched by the local street artists who painted the tribute to recreate the mural elsewhere. 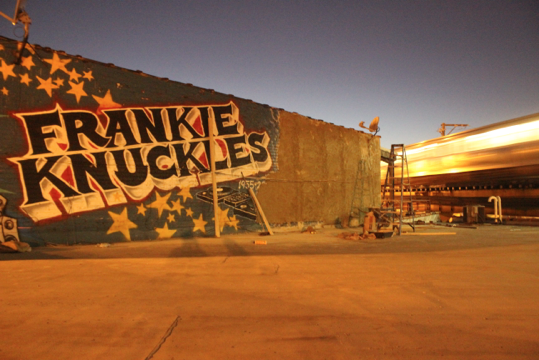