Celebrating the legacy of one of hip-hop’s most bizarre figures.

Before passing away in 2010, hip-hop pioneer Rammellzee recorded Cosmic Flush, an album of “breakcore and speed metal-influenced rap tracks” alongside producer Jonah Mociun. Rammellzee was one of the most idiosyncratic artists from hip-hop’s early years who proposed a theory of Gothic Futurism and, in 1983, released ‘Beat Bop’, a blueprint for experimental hip-hop.

British label Gamma Proforma is releasing the lost album in a series of seven 12″ records featuring remixes and visual artwork from different artists. The entire series will also form part of an exhibition set to take place in New York City and London later this year.

The latest release in the series is ‘Fight My Fire’ which features a remix from another cosmic hip-hop traveller, Edan. Artwork comes from legendary graffiti artist Doze One, a friend and contemporary of Rammellzee.

The 12″ is limited to 250 copies worldwide, with pre-orders available at the Gamma Proforma shop.

Ahead of ‘Fight My Fire’ will be ‘Crayzay’, released in August and featuring a remix by Mike Ladd and artwork from Boris Delta Tellegen. You can pre-order it here.

The first two releases in the series featured artwork from Futura 2000 and Ian Kuali’i alongside remixes from Divine Styler (who returned to hip-hop last year with an album on the label) and Mr. Len. 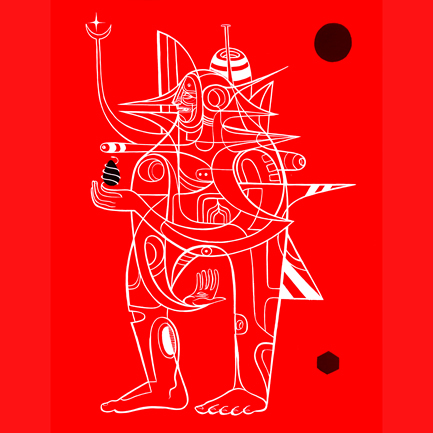