For the past seven years, Inglewood’s SiR has worked behind the scenes in the music industry, one of the many characters who has helped make records happen but doesn’t always get acknowledged.

Trained as an engineer and raised on a diet of gospel, G-funk and R&B, he began his career with award-winning singer Tyrese before going on to work as a singer and songwriter for the likes of Jill Scott, Robert Glasper and Bilal among others.

While his day-to-day and songwriting work kept him busy, SiR was also crafting personal solo projects in his spare time. After a handful of self-released projects, he uploaded an EP to SoundCloud that caught the ears of Portland’s Kenny Fresh, who, after years of dedicated music blogging, launched the Fresh Selects label in 2013. Kenny convinced SiR to take down the EP from SoundCloud and turn it into a full-length album.

The result of this newfound relationship is Seven Sundays, a debut album that blurs the line between R&B and hip-hop, pulling from the spacious aesthetic that typifies much of the West Coast’s output while honing in on SiR’s inclination for crafting songs that can speak to the listener. Seven Sundays features production from Knxwledge, whose relationship with Fresh Selects goes back years, as well as Chris Dave, drummer for D’Angelo, Baltimore’s DK The Punisher, fellow Angelino Iman Omari, and Tiffany Gouche. Anderson Paak, another LA-based singer currently attracting praise, also makes a guest appearance.

I called up SiR at his Inglewood home earlier this month to discuss his move from behind the scenes to solo artist, studio dynamics, the evolution of R&B and the genesis of his debut.

Why did you decide to make the move from songwriting to releasing as a solo artist?

As a writer sometimes you’re just writing, creating for the sake of creating and it got to the point where I had a whole bunch of records I loved and they weren’t placed, they weren’t finding homes. I thought it’d be best to put them out for people to hear, just to get a response. There were two projects, before Seven Sundays, and I got a great response and nothing but love and support since I started to pursue that path as an artist.

What originally brought you to singing and songwriting?

I grew up in a family of musicians. My brother and my mom sing, my uncle plays bass, my other uncle plays keys. I grew up in a church, so it wasn’t something I could avoid. When I was younger I tried to get away from it but my mom stayed on my ass, and the church too. It developed into something I learnt to love on my own, which I appreciated more instead of doing it because everyone else in my family was doing it.

I started off shadowing my brother, Davion, who has been writing since 2002. When I graduated high school he was writing with the Pussycat Dolls at the time and I would always go by and check him out. Eventually I decided to pursue it full time and I went to school first. I went to the Los Angeles Film School and after that I started working for Tyrese as an engineer, around 2007, 2008. By then I’d already started writing songs and put my first project out. There was no looking back.

How does your engineering knowledge help with your work as a writer?

To me it’s necessary. A lot of people might think they’ll just get an engineer and go into a studio and so on but that shit costs money. Engineers ain’t free. It’s better to have everything in your hands. Wouldn’t you want to have control over your situation? That’s putting more control in my pot, it makes it easier for me to get what I want out of music.

What happens when you’re writing for someone else?

I try to make sure that when we go in, it’s ready to go, that we can record, that everyone is on the same page. It can be hard going in with an artist you’ve never worked with or somebody that has stature. It can be difficult to gage the situation. So I might go in with some icebreakers, whatever I gotta do to make the situation cool. My technical side helps so much. If someone has a thought or idea they want to get out I can make it happen. I can open up a DAW and work. I like to bring that into the situation, it makes everyone feel more at ease, even the engineer who might already be sitting there, he’s happy and I know what he’s going through.

How does that compare with your own solo work?

My creative process is a little different. I typically don’t write songs and record them in the same sitting. A lot of people might think I’ll just fire up Pro Tools and record but I like to let songs live. I’ll write something and let it live for a couple days. If I can’t stop thinking about it or if I feel ready to record I’ll go in. I’m big on the message, more than the melody or music, I’m big on what I say. So I really pay close attention to lyrics and I’ll go in once I’m happy with what I have.

What are some memorable experiences of your career as a writer so far?

I work with a producer named Andre Harris, who used to work within a team called Dre and Vidal. They produced Jill Scott’s first album. I met him through the L.A. scene. We started to write together and that’s how I met Mrs. Jill. At some point, Dre and I had an opportunity to work with Robert Glasper on a song for Mrs. Anita Baker, and that day was crazy. I got off work, went straight to the studio and the first person I saw was Hit Boy, which threw me off. I walked in the wrong studio! I stayed for a couple minutes and left them to work.

I walked into the right room, and it’s Mrs. Anita Baker, the president of Blue Note and my idol, Musiq Soulchild, who was just there as a fan of Mrs. Anita Baker. So I’m sitting there in super shock, with someone I grew up listening to and Anita Baker, who everyone grew up listening to. By the end of the night we’re chilling and they asked me to play some of my stuff, so I did. Some personal music, not placement stuff. Played a couple songs that are now on Seven Sundays and everyone paid high praises. I was sitting in a chair, jittery as hell, trying to keep my cool. You couldn’t tell on the outside but that whole day was just amazing, it’s one for the books. And I ended up with a credit on Jill Scott’s project too. 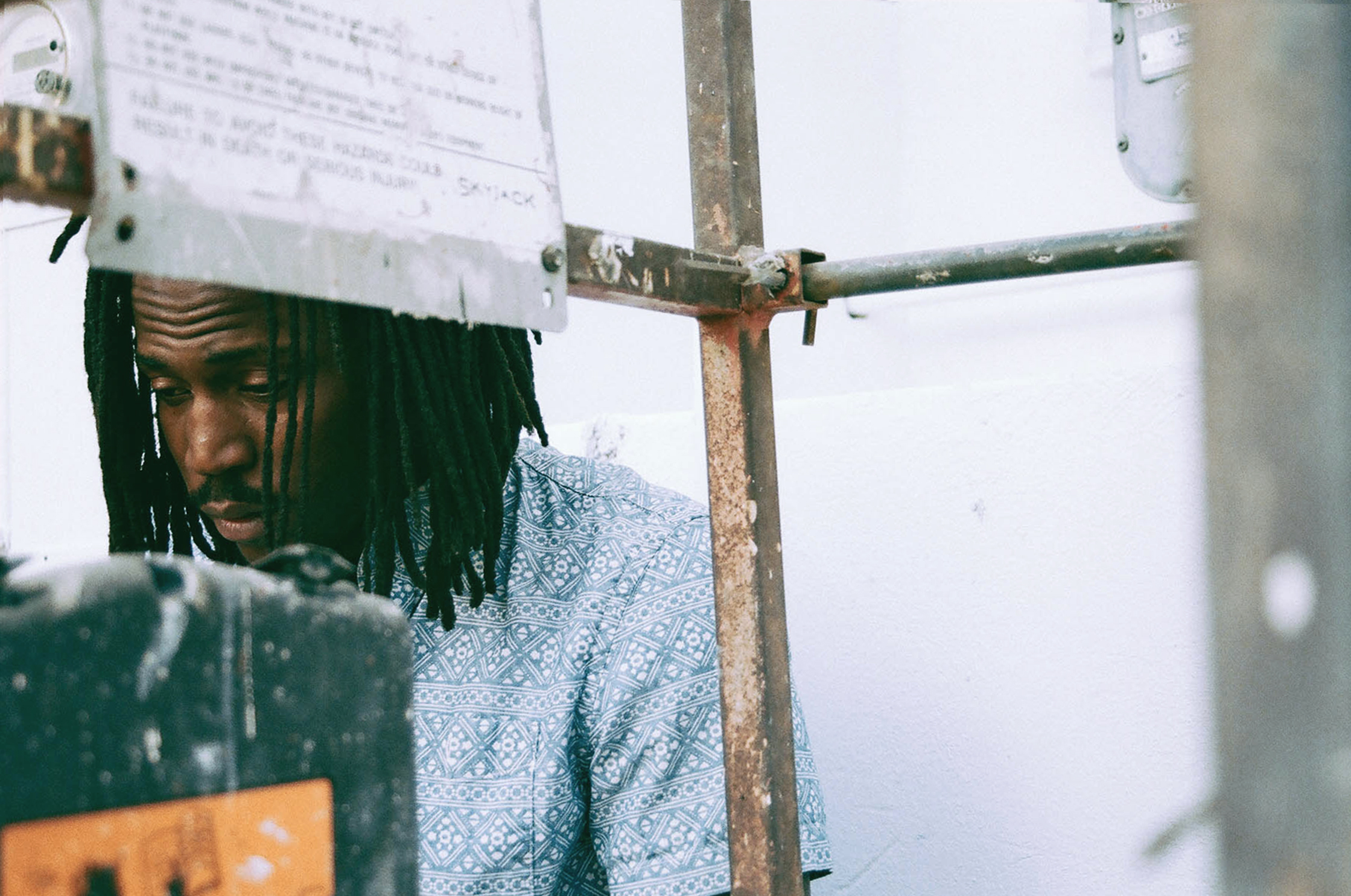 “I love to write songs, I do it for sport.”
SiR

How important are your surroundings to your creativity? L.A. always seems to conjure a certain type of quality in music.

I’m from Inglewood. Out here that’s a big difference. If you ask somebody from Compton if they’re from L.A., they’ll tell you to get the fuck out of here, they’re from Compton. You know, I do draw a lot from the city of Inglewood, just my family, my friends. I try to make all my records as personal as possible. If I’m telling a story, it’s a story that happened to me. If I need inspiration I know where to go in my city, I have spots to go sit, smoke, write. I moved away for a while but my wife and I came back to Inglewood and nowadays I feel so much inspiration being two blocks from where I grew up and a mile from where I was born. Makes it easy.

How was the process of putting Seven Sundays together?

Quite smooth. I was working on Jill Scott’s album at the time and she’s one of the greatest writers of all time to me, so working with her had me super inspired. I was writing crazy records during my time with her. Writing for her but also stepping away and still inspired to write more. It was just work. Most of the songs came from that. There’s a young producer from Baltimore called DK The Punisher who was instrumental in the record, helping me put it together and get the right songs. It was an easy process, I just had to pick a few songs I already had and write some more around that and mould it together. With the production, it was easy too. I had Knxwledge and Iman [Omari], Tiffany [Gouche], DK… the production was nothing. It came together real easy.

I assume the spread of producers on there also comes from your connections with various people over the years?

Oh, definitely. Iman is my little brother. I met Knxwledge through Iman. Tiffany Gouche, that’s my cousin. DK I met through Dre, and Chris Dave too. Once you meet good people and you show people respect and love, it always translates and comes back to you. You put out what you want in your life. I just made great relationships with people and… Chris threw me that beat, along with 35 others he wanted me to write to. It was a blessing. Anderson [Paak], that’s the homie just through music, I met him on the scene. It was instantly love and respect, his talent is unmatched. Those were relationships I wanted to protect, so I’m trying to do whatever I can to put this out there.

It feels like the album, by virtue of the productions you selected and also your writing, really fits into the evolution of hip-hop in past decades especially in regards to what the L.A. area has brought to it.

For sure. Things are changing. Artists everyone loves get old and there are a lot of young people that looked up to these artists but who are also trying to find their own voice. Iman is a great example of that, he came out and he just does him. He don’t take no shit, no questions, he just does his thing. And he’s played a big part into why I do what I do as well. I learnt from him to not necessarily listen to someone else to tell me if something is tight. It comes from us being surrounded by a combination of gospel, G-funk, we all grew up on that out here, and just R&B and hip-hop. 1990s music, the Missys, Jill, Ginuwine – we pull from there but we also pull from personal experiences, it’s a combination of those two things.

Why choose to build the album around the evolution of a relationship?

I mean, what is life? It’s based on the relationships we keep. I wanted to make something that people could relate their own situations to. I wanted people to be able to relate to the songs, even if they come from my own personal experiences. I wanted it to still be general enough for people to understand where it’s coming from. I pulled a lot of inspiration for it from my wife, she’s the love of my life. And I’m kind of a machine, I love to write songs, I do it for sport. I don’t necessarily need a specific inspiration. Of course I’m inspired by my day or something going on, but largely I just write songs for the sake of it, I don’t need much, just some weed.