Carly Rae Jepsen’s E•MO•TION is, so far, one of the most pristine pop releases of the year.

Indebted to the 80s, but elevated beyond the John Hughes pantomime that has been excessively popular in multiple genres, the album situates Jepsen as an artist who can intelligently move past the murky waters of her first hit ‘Call Me Maybe’, which, in 2012, it seemed could have been her only one.

But by working with Sia, Dev Hynes and Vampire Weekend’s Rostam Batmanglij and taking the time to record without a mad dash to the finish line — her last album Kiss was only recorded in a few months after the success of ‘Call Me Maybe’ — she’s created an album that is both sonically interesting and lyrically mature. Love is never toxic to Jepsen, it just sometimes doesn’t work out. When she sings about the bad, it’s with self-reflection and emotional intelligence. And when love is good, she is fearless.

FACT spoke to Jepsen on the heels of E•MO•TION’s release, where she went a little deeper on some of the songs’ meanings, her songwriting process and if she still hangs with her pop guardian angel Justin Bieber.

“I very much set out to make an album of maturity.”
Carly Rae Jepsen

I know you recorded Kiss very quickly. Can you tell me a little bit about why you decided to be a little bit more methodical with this record?

I think it kinda came out of that learning experience. It was a mutual decision decision by me and my team: The single’s taking off, let’s see if I can make an album real quickly. It was really exciting because it was the first time really I was given this opportunity to work with these producer. Max Martin is the Wizard of Oz of pop music. It was a really exciting time. But at the time, I was like, if I can get my way the next time around, I’d like to not rush it. I had time to go back and really challenge ideas and try and make it stronger. Scooter was one of the first people to really get it and that I didn’t know what I wanted to make yet. And it would be ready when it was ready.

A lot of people refer to your music as ‘teen pop’. I don’t know if this is me projecting, but we’re the same age, and I find your lyrics to be really mature and coming from a place that only someone who’s had a lot of romantic experience can draw from. Am I totally off-base here?

I very much set out to make an album of maturity. At the end, I told some people it’s very pop, you don’t go into these things saying, “come hither,” too much, but I feel like there’s definitely a sexual thread throughout the entire thing. It’s probably just a little bit more subtle.

I remember when ‘I Really Like You’ came out, a friend of mine and I were talking about it and he mentioned something about it being the most chaste pop song I’ve ever heard in my life. But I think you can read between the lines. It might not be.

Yeah, you can take it as a slight flirtation or your first time in a relationship with somebody. It depends on what you’re looking at.

There was an interview recently where you said, “Feminism doesn’t mean you can’t be in love” and that really resonated with me. Could you explain a little bit more what that means to you?

I believe that. It’s funny, I had this idea when I made this album because, I don’t know, sometimes you find yourself in this romance and it kinda dominates your everything when you’re in love. I had this idea that I had to be single while I made it so I wasn’t influenced by any other opinions or by boys or by a man’s opinions. I was wrong to believe that. You can find strength with a partner and it doesn’t take away any of you at all. 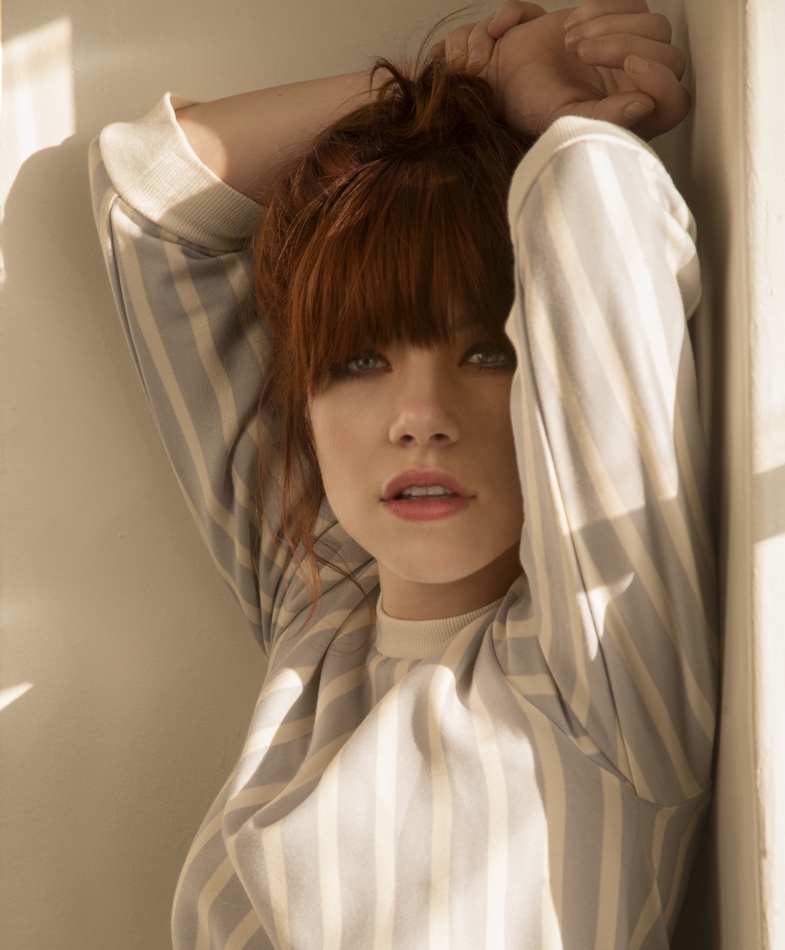 On the subject of paramours, there have been a couple other pieces that have read ‘Boy Problems’ as a song about coming out. I was curious about your opinion of that interpretation.

You can make it your own! Whatever it is to you! But for me, I was finding myself talking to anyone who would listen to what was going on in my life with my man. It got to the point where I could almost hear how annoying it was. You become this girlfriend who won’t shut up about her boy. [You get friends saying], “You need to break up with him or please stop talking about it.” And I wrote that song from the perspective of understanding what my friends might be thinking and calling myself out on it.

That does go back to writing in your late 20s and so on, you have a bigger understanding of how you relate to other people in the world and that they’re not necessarily encircled in your heartbreak.

Right, it’s not the only thing! And it got to a place for me where it came to the process of writing that song where I was like, “this doesn’t have to be my whole world.” It should be adding to my life, not taking it over.

Do you still have a relationship with Justin Bieber?

It’s mostly professional. Obviously he’s a huge part of my career, from breaking out of Canada to now and finding the label. We both support each other. I saw him last at [his Comedy Central] Roast. I was proud of him for taking all that heat.

Was there anything particularly interesting that happened there that we wouldn’t have seen at home?

I think it was just funny from our perspective because everyone we were sitting with was our label and our team, people who have been working with Justin since he was a babe. So, any time a joke was a particularly funny one, we would all look at each other for permission, like, “is it OK that I’m laughing?”

In ‘I Didn’t Just Come Here to Dance’, there are two guys you reference in the chorus: Joe and Tino. Is that at all a reference to My So-Called Life*?

Actually, no. It’s an amazing thing, how a song can go from one intention to another and from one songwriter to another. I began that song idea years ago with two friends, two Canadian writers, Joe Cruz and Tino Zolfo. We were just jamming one night, late and had a proper whiskey each. It was just in that jam session moment, where you’re not really thinking about writing. The bridge came around and I shouted at one of them, “hey Joe’s calling over, Tino is calling me over” and we started laughing. And I just said, “I’m keeping it, I like it.” Later I brought it back and I brought it to [songwriter and producer] Lukas [Loules]. They were really digging it. Obviously, we changed it a lot since then, but we kept that part.

*The short-lived American show from 1994 featured a character named Rayanne who was constantly talking about a guy named Tino that the audience never saw. Often at parties, she would leave the main character Angela to talk with him.