Adventures in the Next Dimension: How spatial sound design is opening a new frontier

Photo by: Florence To

What if you found a way to not just listen to music, but to hear it?

A method that not only puts you in the same place as the artist, but gives you a chance to be completely alone with the music moving around your head, as if you’re composing the sounds yourself through sheer imagination? Spatial sound design may just be the answer. Using a century-old technique called binaural recording and software that allows the artist to place sounds anywhere in your field of hearing, a scene of musicians is now harnessing this technology to expand your listening experience.

Technology has always shaped culture; scientists and artists chasing ideas of tomorrow but helping each other out in the present. Even crooning was a cutting-edge scene once, as advances in amplification technology allowed singers to vocalise more gently into the microphone. Science holding art’s hand and breaking girls’ hearts in the process.

In its most common form, binaural recording takes the shape of two microphones inside the ear canals of a ‘dummy head’. The shape, size and density of the head closely replicates the sonic properties of a human head, and the microphones placed in this position sample sound in the same way our eardrums do. When you don the headphones and listen back to the recording, you experience the illusion of the sounds being located all around your sphere of hearing, just as we always hear: in true 360-degree surround. (You may have heard the classic barber’s trick, where the zipping sound of a razor runs over your head, tickling your ears into accepting it as a sensory truth.) 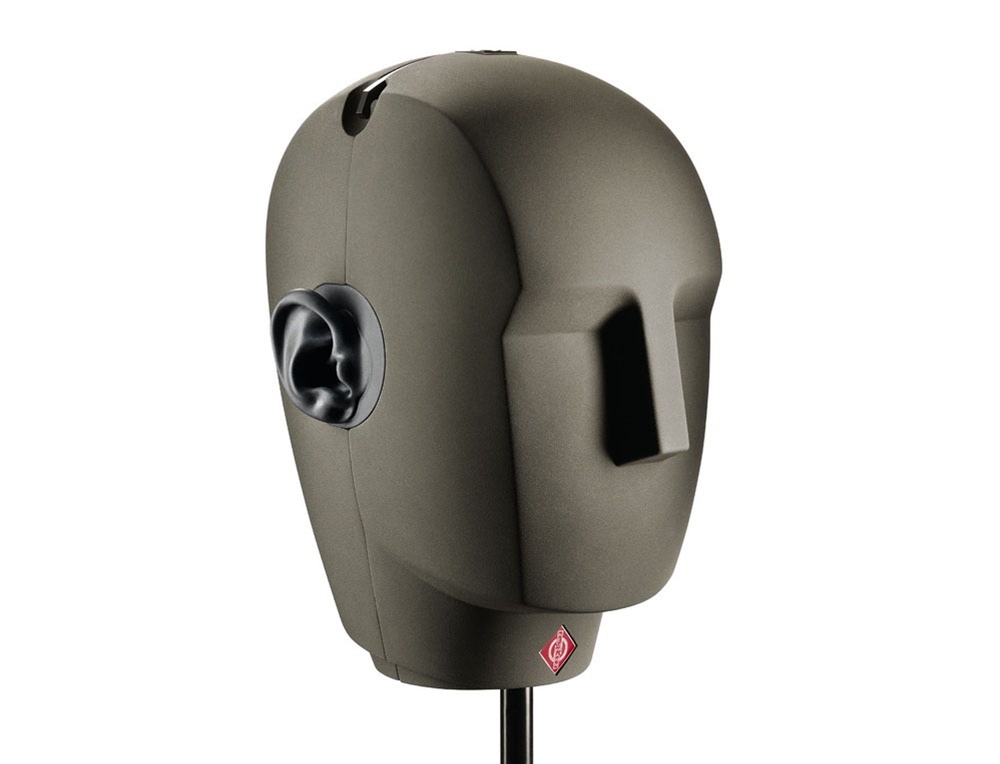 “I love music as escapism, not tied to the usual bland formulas and lyrics about love, but as a way of physically jumping into an alternative reality that we can explore.” Max Cooper

Binaural recording was initially developed to enable theatregoers to call a hotline and listen to an opera as if they were there in person. Effectively, it was a form of teleportation or telepresence, taking the listener from their everyday reality and transporting them to the front row. It’s this feeling of immersion that first drew British producer Max Cooper into spatial sound design. Initially experimenting with reverbs, panning and stereo widening techniques, binaural recording opened a whole new world to him.

“On one level it just grabs attention so that people might listen more closely,” he explains. “It’s certainly a good technique for punctuating certain points in a track, which I might switch momentarily to mono or make an extreme stereo effect that studio engineers recommend against, in order to give the feeling of space collapsing or folding oddly – something that your brain has to flag, as it could be a concern if it happened in real life. But the main reason for all this is that I love music as escapism, not tied to the usual bland formulas and lyrics about love, but as a way of physically jumping into an alternative reality that we can explore. 3D sound is the best way of achieving this musically.”

Working with Amsterdam’s 4DSOUND, Cooper has been pushing the sonic possibilities of some of his live shows to new levels. With the aid of specially designed software, he makes sounds rain down from the ceiling; they swell and spin around the room, less like vibrations than atoms swept up in his weather system. The overall effect is “somewhere between the club and the art gallery”, with half of the audience shuffling around to find new pockets of sound while the other half stand with eyes closed, spellbound.

It’s easy to get swept up in the sensory experiences conjured by this recording technique. Through the sheer physicality of the music makes it easier to focus on and ultimately fall into. For Colour 8 founder and long-time binaural champion CJ Mirra, the technique offers major advantages over standard recording. His latest release, Space Trix, is a completely 3D mixed compilation featuring Matthew Dear, Mike Slott and ambient luminaries Heathered Pearls, among others.

“It was about getting the feeling that you were inside the music,” he says. “There are so many tracks that have an atmosphere or feeling that I just want to step into and be surrounded by – binaural definitely does that more than the standard stereo. I wanted to play back the sounds in environments that enhance what I thought the tracks were doing – which is kind of what the mix stage of any music is, but this takes it to the level of deciding to mix it in a forest, with all the sounds that are natural to that space, and the music becomes part of the scene and we capture it in a way that puts every listener in that exact place and time.”

“It was about getting the feeling that you were inside the music.” CJ Mirra

Like Cooper’s music, with Mirra’s record there’s a sense of being absolutely in the moment but also a feeling of escapism. You can actually hear the forest in Matthew Dear’s ‘Around a Fountain’, a track that sounds every bit like a procession, and on Mike Slott’s pendulous opening track it’s easy to pretend you’re swaying on a spacecraft as space unfurls out the window. Some listeners have claimed to “feel like they are not in their own body when they listen to Space Trix”, says Mirra, and they’re right. The experience is so strangely visual and convincing that you can quite easily leave your sofa. Hearing music with this attention to location and movement gives you a greater connection to its creators and a heightened sense of engagement with the worlds they create. In a time when technology has lopped the edges off much of what gives music its life and soul, streamlining it into neat but dull packages, it’s refreshing to feel that sound is being used creatively once more.

This renaissance in spatial sound design hasn’t just bubbled up because DAW programs like Logic offer 360 mixing options. One huge push for the technique has come from virtual reality. Filming a recent 360 VR concert for Beck, director Chris Milk says he had to use binaural to “magnify the impact and depth of the experience.” Mirra alludes to this when I ask him about future possibilities for the technology, suggesting that we will become “increasingly knitted to smartphones and wearable tech, and listening to procedural audio with algorithms placing the sounds in virtual binaural environments that reflect our mood, food choice, blood pressure, anxiety level, dream content, etc.” The forthcoming Space Trix II will even include a visual element, making it one of the first audio-led VR projects.

In this mixed media arena it’s obvious to see how 360 mixing could become standardised, but another powerful pay-off is already starting to happen. Mirra found his way into binaural recording through his mentor, renowned sound artist Dallas Simpson. Simpson pioneered a major binaural technique which takes the dummy head approach but sees him placing microphones in his ears to walk the listener through various different environments. When you listen back to his recordings, you’re effectively listening to the world as he does. When music reaches a level where you can completely relate to the artist and feel every word or note as if they were talking just to you, it becomes great music, and in essence, spatial sound design can do that even before a chorus breaks or a beat drops.

Custom PAs like the 4DSOUND system are rare, so the only real opportunity to listen to this music is by yourself, through headphones. This may be a sign of the times, but it’s true that Jon Hopkins and Daniel Avery sound as good on your own as they do in a throng of people. Shifting textures and engrossing build-ups contain spatial cues already, but there are so many tracks crying out for 3D mixes. Spatial sound design is the equivalent of giving producers a new axis to play with. Its potential for enhancing electronic music is obvious, but it may also be true with other genres. Our idea of great music often rests on the idea of being able to really “feel” the soul of a track, and these methods effectively bypass that. Feeling a connection with an artist is what music is made of, and through spatial techniques a musician could even “manufacture” that soul, tricking you into feeling a certain connection with the music whether you actually like it or not.

Simpson sums up the future of the technology rather beautifully: “Spatial sound design creates context. It enhances the space of creative expression and performance. It introduces additional spatio-temporal detail – elements off stage, off camera. It can allude to flashbacks and future scenarios. The arts have always found a variety of ways to affect an audience. And it can radically alter our perception. On the one hand it can heighten the sense of foreboding and fear, while on the other it can enhance the tranquillity and peacefulness of closed spaces like working environments and homes, and open spaces such as gardens and leisure parks.

“I think it could be the opening of a new era of perception, of developing an increased sensitivity to the world and people around us, and a means of enhancing the arts in all forms.”

With the technology becoming increasingly simple and accessible, who’s to say he’s wrong? The future is all around us.