Novation Circuit: The groovebox that lets you make a track in minutes

If there’s one thing that unites most of the current generation of compact and affordable synths, it’s their focus on the past.

Roland, Korg and Yamaha have all released devices in recent years that look to iconic devices from the 1980s, allowing people to partake in the legacy of these companies without having to source expensive originals on the second-hand market. While these devices satisfy our retro-fetishistic urges, they’re also something of a missed opportunity. We can make hardware synths and drum machines cheaper than ever now, but for the most part they’re shrunken versions of devices that existed decades ago. 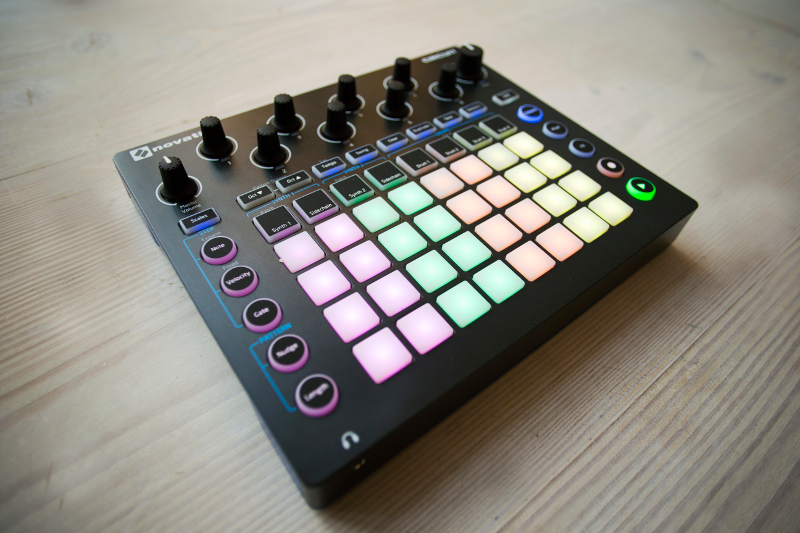 Novation’s Circuit is clearly inspired by what the company’s Japanese counterparts have been doing over the past few years, but it also rejects the idea that these small music-making devices need to be rooted to a decades-old design philosophy. It squeezes two polysynths, a drum machine, sequencer, mixer and effects into a device roughly the size of an iPad, giving the user everything they need to make a basic track in one device. It’s billed as a both a groovebox you can use to make a tune in minutes and a device designed to inspire creativity, but the company also seems very aware that those moving from software to hardware might give up because hooking everything up is more difficult than loading up Ableton.

“The real influence came not directly from other hardware or software, but from producing music and wanting to have inspiration to write music that wasn’t just ‘load another plugin’, or ‘flick through a few gigs of samples’,” Novation product manager Olly Burke explains. “That process usually does the opposite of inspiring. I wanted a different approach to generating ideas.” The solution was to take inspiration from Novation’s grid-based Launchpad controller, add some control knobs, a built-in speaker, a filter and dedicated controls and create something that anyone should be able to use no matter what their ability. “The Launchpad’s grid as a musical generation tool had so many possibilities, and we wanted to convert that potential into a real, standalone creative instrument,” Burke explains.

Most small synths and drum machines have sequencers, but the engine running inside Circuit is best compared to a very basic version of Ableton Live. There’s a sessions page where you can access up to 32 saved tracks, and within each session you can build up loops using the two polysynths and simple four-part drum machine. When you switch between functions, the pads give you colour-coded feedback as to what’s going on, so you know instinctively if you’re in the drum sequencer or the pattern select screen. The velocity-sensitive pads can be used to lay out beats, melodies or chords, with notes locked to whatever scale is chosen from the selection. To record notes, you use the dedicated button while playing, or dial in notes to one of the 16 steps manually, and it’s easy to duplicate patterns too. If you’re familiar with Novation’s Launchpad then Circuit quickly becomes second nature, but it’s equally the kind of thing a complete novice could get working in 10 minutes.

Initially the sequencer feels limited. Within each session you have just eight patterns available for each sound, each of which is capped at 16 steps. However, these patterns can be chained together to play on the fly, meaning that longer sequences can be created. As Burke notes, the sessions themselves can be used to expand things even further. “There are 32 sessions slots,” he explains. “Rather than thinking of sessions as 32 different song ideas, save the same song into two, or four slots, then create variations, or A / B sections. You can switch between songs in real time, so you’re able to extend your song much further than the eight patterns per session.” Crucially, automation can be recorded with the unit, meaning that Novation’s promise of being able to create a whole track using Circuit isn’t a hollow one.

Sometimes starting a track is the hardest thing to do, and compared with Ableton, Circuit has the upper hand

Just as the sequencing interface is different to small devices from Korg and Roland, the synth engine itself is geared up for simplicity. Once you’ve loaded a sound, you can tweak it using the eight knobs at the top, but they don’t follow the rules you’d find on a standard synth. “We didn’t want to label synth patches parameters,” Burke explains. “This is not about spending time sculpting the perfect sound, it’s about fast sound discovery and getting expected and sometimes unexpected results through tweaking.” Most patches will have oscillator, envelope, filter, modulation and effects controls, but may be different depending on the sound. “If a bass sound is all about the filter modulation, then we’ll dedicate more controls to that,” Burke continues. While synth purists might be upset at not having the full range of controls, guiding you towards the most useful functions for the sound stops you going down a wormhole of endless patch tweaking, which fits in with Circuit’s pick-up-and-play philosophy.

While Circuit is designed as a very simple device with a built-in speaker that can run off batteries if needed, Novation clearly wants it to be used as much more. When plugged into a proper set of speakers, the drums and basslines sound as bold as anything you’d get from Roland’s TR-8 and TB-3, which are probably the closest point of comparison. With six voices of polyphony on board however, the possibilities are much greater. As well as an audio output, Circuit has MIDI connections that allow you to use the sequencer to play external gear, so if the onboard sounds aren’t to your taste, it could be a very useful hardware sequencer. You can also use it to control softsynths over USB. Arturia’s Beatstep Pro would be its closest rival, but while that has a greater memory, it doesn’t allow for polyphonic sequences like Circuit does. 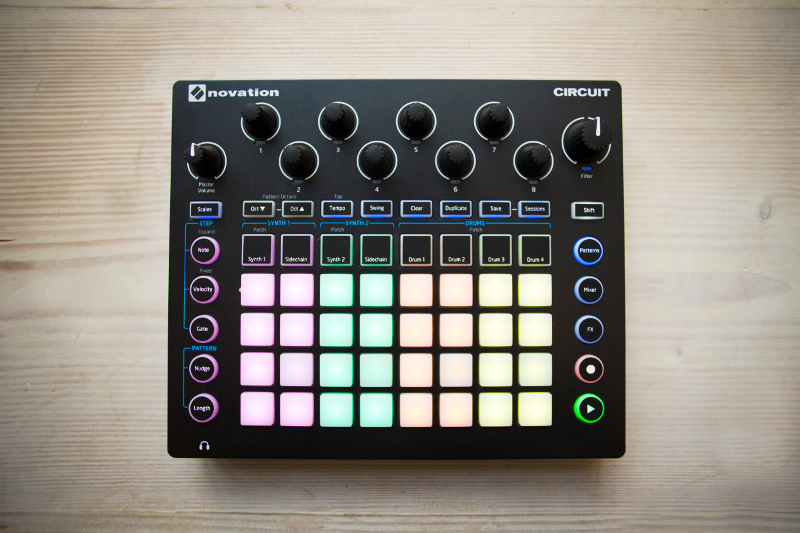 Novation is also working on software for Circuit that will allow for more control. “Out of the box, we’ve created 64 patches, which, with the eight macro controls gives you a lot of sonic possibility, but we know that users will want more control over the synth and to be able to make their own patches,” Burke explains of the software. As well as greater control over the sounds, it will feature a means of transferring sessions on and off the unit. Unlike Novation’s Launchpad Pro, Burke says the Circuit firmware won’t be open source, but that the company does want to maintain the “hackable” philosophy. “The Circuit engines can be controlled via MIDI externally so this will open up a lot of possibility in taking the product further.”

Circuit won’t be for everyone. While creating tracks is both easy and addictive, and I felt like four drum parts were enough for my needs, I sometimes craved a bit more control of the synth patches themselves. It’s likely to be something more experienced users will want, so it’s good to know Novation will be offering a solution in the companion app. Similarly, the effects are limited to delay and reverb, which might not be enough for people who like to take their sounds a bit further out. But wanting these things seems to defeat the purpose of Circuit. As Novation’s recent teaser campaign made light of, sometimes starting a track is the hardest thing to do, and compared with Ableton, Circuit has the upper hand. Most importantly for me, it doesn’t feel like a cheap EDM box. It’s one of the most accessible pieces of gear I’ve ever used, but I get the impression seasoned producers will be able to twist it into a shape that fits their needs too.

Read this next: The 13 best affordable, pocket-sized, hackable, off-the-wall synthesizers