Update, February 5: DJ Justin James has got in touch with his side of the story.

“Sex sells. Period,” he told us. Read the rest of his response.

So thank heavens we have people like DJ Justin James fighting at the coalface of gender equality.

James, ‘a DJ from the US’ (not to be confused with the techno DJ Justin James), has shown his support for the cause with these empowering words, posted to a public Facebook group called ‘Support FEMALE DJs’. He’s since deleted the post, but here’s a screenshot. 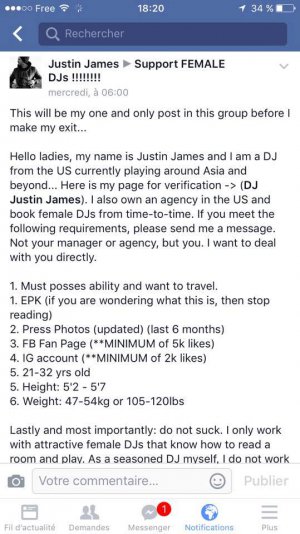 What he’s actually done is piss everyone off with his sexist list of requirements that female DJs must fulfill, should they *wish* to accompany him on tour.

Understandably, people are furious. But as this reply suggests, he has refused to back down. 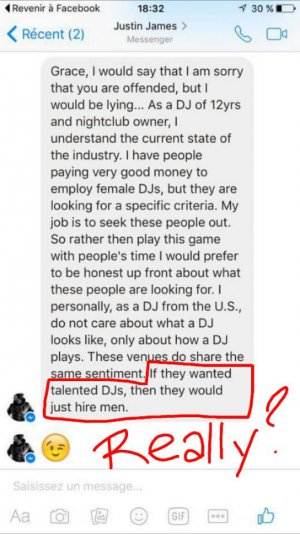 James is just an ignorant individual, but his misogynistic view makes up a depressing bigger picture of an electronic music scene blighted by inequality, with Female Pressure reporting that the number of female DJs booked for global events barely scrapes the 10 per cent mark, and with all-male line-ups an all too familiar occurence. And he’s an alarming reminder that in terms of progress, we’re sometimes going backwards.