“We were cannibal kids finding love amongst the ruins of Thatcher’s slash and burn agenda,” says singer Mark Stewart of The Pop Group.

The Bristol band’s extraordinary album For How Much Longer Do We Tolerate Mass Murder? is about to get a long overdue re-release. Listening to it now is like unearthing a time capsule buried in 1980. It teems with all the antagonisms and urgencies of a fraught year: Thatcher just elected, Cold War tensions heightening, the far right resurgent, Northern Ireland simmering, authoritarian police cracking down on dissent. Its murky funk, free jazz squalls, dub diffraction, howls and shrieks are the sound of a society falling apart. Track titles read like placard demands or slogans from situationist pamphlets. The album package, with its posters, lyric sheets and images cut out of newspapers, feels like a samizdat publication in its own right.

The Pop Group retained fidelity to the counterculture’s demands for a total transformation of the world. They were still part of what Herbert Marcuse called “the Great Refusal”: “the refusal of that which is”. Punk’s preferred stance of demystificatory cynicism masked an ambivalent emotional response: anger at countercultural naivety mixed with disappointment that the counterculture’s optimism was no longer possible. But The Pop Group belonged to that strain of post-punk which wanted to make good the promises that even the most successful ‘60s music failed to deliver on. As such, the album was at odds with a growing mood of resignation and retreat which was spreading through post-punk and wider British society.

David Wilkinson’s book Post-Punk, Politics and Pleasure in Britain, to be published later this year by Palgrave Macmillan, recounts the difficult context from which The Pop Group’s music emerged. His careful analysis reminds us of the immense weight of expectation that was placed on people in their teens and early twenties then, and of the way in which the disappointments and recriminations of that moment continue to haunt us today. 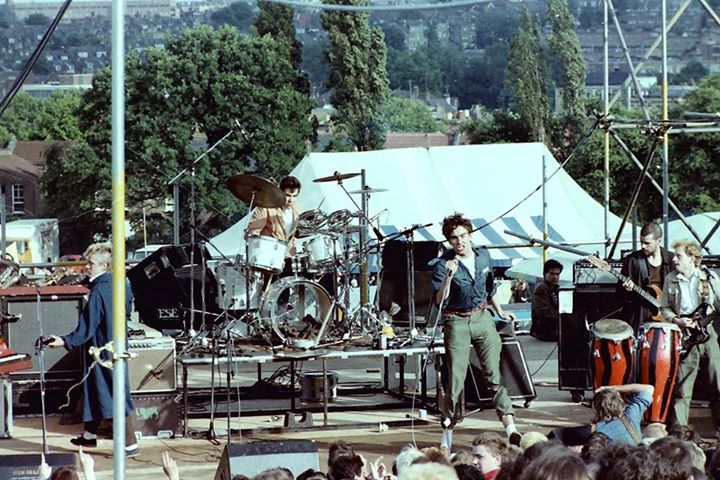 “I get immense pleasure from risk”
Mark Stewart

The Pop Group’s early records had been lauded by the NME, the central hub for post-punk discourse. But the group’s turn away from Promethean rebellion (‘Don’t Sell Your Dreams’, ‘Thief of Fire’) towards what seemed, on the face of it, to be an agitprop didacticism dismayed some of the weekly’s most influential writers. The group were moving in the opposite direction to the NME tastemakers, who were coming to a chic new accommodation with the commercial mainstream, arguing that the “negative capability” of doubts and indeterminacy was a more effective subversive strategy than stridency. After a few hits, however, New Pop’s thoughtful twists on chart music would soon be absorbed and forgotten. Within year or two, the Great Refusal would be consigned to the margins, and capitalist realism – the belief that, in Thatcher’s immortal phrase, there was no alternative – would reign in culture and politics.

Pop Group guitarist Gareth Sager is philosophical about the negative reaction the album received from some quarters. “Good reviews can be as dangerous as bad ones,” he says. The debates provoked by For How Much Longer rehearsed some of the disputes over aesthetics and politics that had exercised revolutionaries throughout the twentieth century. Was the message the most important thing, or was it formal innovation that made artworks revolutionary? The remarkable thing about For How Much Longer is that it refuses to choose.

“It was very important that we did something that was ours and didn’t sound like anything else,” says Sager. “We appear to have drawn on a much wider variety of influences than most bands.” Complacency was never an option. “I get immense pleasure from risk, rising to a challenge and risk,” adds Mark Stewart.

Those who decried the record pegged it as dour proselytising, yet listened to now, For How Much Longer sounds anything but. This is not an album in which pleasure has been dutifully sacrificed to political conviction. What is unnerving and exhilarating is the contiguity of enjoyment and political consciousness. It is less like a dreary sermon than a strange dream, in which accounts of unconscionable misery and exploitation co-exist with the fugitive compulsions of a febrile dance music. On the final two tracks in particular, ‘Communicate’ and ‘Rob A Bank’, critique is all but swept away by a rogue joy, a carnivalesque ecstasy that explodes from the speakers.

“Bring the war into people’s homes,” goes a line on ‘There Are No Spectators’, and the album is best seen as part of a struggle against the new “common sense” that capital was seeking to impose in the early 1980s using techniques of reality- and libidinal-engineering (PR, branding and advertising). While dominant ideology sought to naturalise and neutralise drudgery, atrocities and exploitation, The Pop Group aimed to do the opposite: to bring suffering and systemic violence to the screaming forefront of consciousness. This wasn’t simply a matter of reciting facts, but of emotional engineering, a jolting out of the ideological trance that accepts injustice as inevitable. Mark Stewart’s vocals perform this maladjustment, this refusal to treat the excesses of global capitalism as anything but insane. “You can never go too over the top when you are nineteen,” Sager remarks. And how is it even possible to go too “over the top” faced with the mass killings and the routinized immiseration that the album deals with?

The single ‘We Are All Prostitutes’, which is being re-released together with For How Much Longer, is scouring, seesawing, seasick funk, a pied piper’s exit from dominant reality, fired by a fissile compound of millenarian terror and militant jubilation. (In the video in above, The Pop Group can be seen performing the track at the Electric Ballroom in Camden in November 1979. The video was recently re-discovered by filmmaker Chris Reynolds, who shot it when he was a film student.)

For How Much Longer Do We Tolerate Mass Murder? came out when capitalist realism was first becoming embedded in British society. Its re-release coincides with a crisis of capitalist realism, as the techniques which have served capital so well for the past thirty years are starting to visibly fail. Militancy is rising, while it is becoming increasingly difficult to keep the suffering and misery that The Pop Group sang of at the periphery of attention.

“Our stance is shared across the globe,” says Mark Stewart. “I just feel that millions are asking the same question. What gives the one per cent the right to disrupt, exploit and take vast amounts of cash from the chaos and smokescreens they create? Now in this time of proxy wars and false flag attacks, now more than ever I say, for how much longer do we tolerate mass murder?”

Mark Stewart and Gareth Sager will be discussing For How Much Longer Do We Tolerate Mass Murder? at a special event at Rough Trade East in London on February 22. The album and single are out on February 19.