Three unheard cuts from the Purple One for only $20k.

A trio of unreleased Prince songs dating back to 1978 are currently available on a one-of-a-kind cassette tape up for auction today. The tape is part of a lot being auctioned through Nate D. Sanders Auctions by former collaborator/guitarist Dez Dickinson, Prince’s first wife, Mayte Garcia, and his former manager Owen Husney. The tape is perhaps the most intriguing of several items which include handwritten lyrics, mastering reference tapes, a guitar and Garcia’s engagement ring. The tape was originally given to Dickinson by Prince to play the guitarist “a female-fronted funk band” he’d recorded on the A side, but the B side was all his.

“Sometime during the next year or so, I used the A side to record some scratch bass and guitar parts for songs I was going to be recording for a rock/power pop demo I was doing, recording over the original content. On side B, Prince had his work versions of 6 songs, which I left intact for, at that time, unknown reasons (obviously, we now know it preserved a piece of musical history),” Dickinson writes in the item description.

In addition to the unheard songs, the tape features early iterations of ‘So Blue’ and ‘Gotta Broken Heart Again’, and a “virtually unrecognizable version” of ‘Sometimes It Snows in April’. The auction on the tape starts at a minimum of $20,000, but so far no one has bid. The auction is over tomorrow and you can head to their site for more information on the tape (pictured below) and the other items. 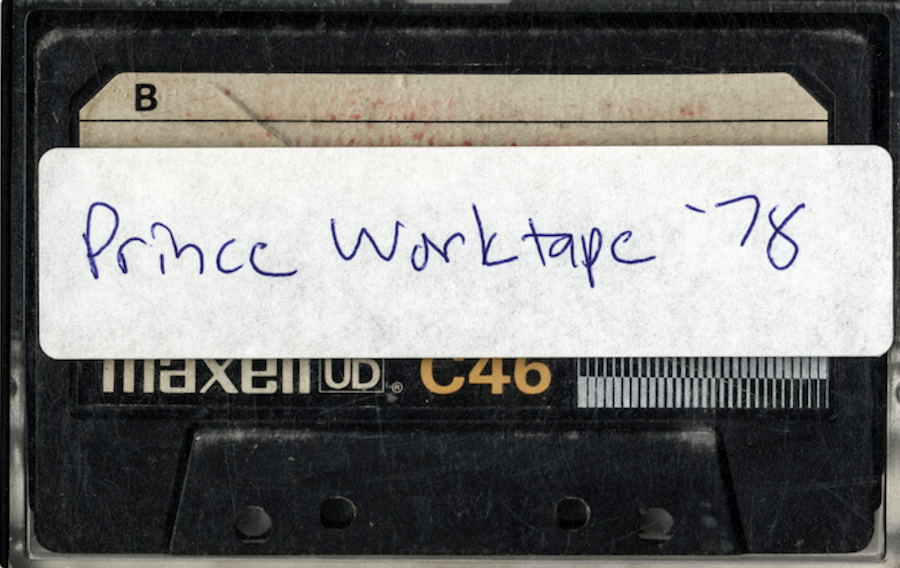