The ethos seems to have worked out for The KVB thus far. Romantically involved for the past five years, the drone-loving darkwave duo have just released their fourth album, a nyctophiliac testament to the possibilities of audiovisual layering, and the couple show no signs of fraying just yet.

The KVB began as a solo project in 2010 for Southampton-based musician Nicholas Wood (or Klaus Von Barrell, as he was irreverently known) to experiment with barely-there electronica. In 2012 the project multiplied following the addition of Wood’s partner Kat Day, and the newly plumped-up band released their debut full-length, Always Then, that same year. Immaterial Visions came year later followed by a string of EPs and cassettes.

Swapping South London’s Camberwell Green for Berlin’s Treptower Park two years ago, the band joined Geoff Barrow’s Invada Records in 2015 with a swirling synth odyssey, Mirror Being, and last week, while continuing to luxuriate in the extra time and space afforded to them by the German capital, they rolled out their latest full-length, Of Desire.

Largely written in their newly-adopted homeland, Of Desire is essentially the band’s second “Berlin album” and conjures the sub-zero temperatures and cavernous post-industrial spaces of their surroundings. But it’s also a record with Bristol blood running through its veins. As with Mirror Being, the LP was recorded at Geoff Barrow’s Invada Studios, using their mentor’s “wonderful synthesisers” alongside a Bristol-made delay pedal, which helped achieve the record’s “feedback craziness” and allowed the pair to focus on refining their guitar melodies through the tangles of distortion-heavy, psych-gaze that has come to define their sound.

The KVB spoke to FACT about the creative bubble of Berlin, the best advice Geoff Barrow gave them, and how video game textures influenced their new maximalist approach. Of Desire is available from Invada now.

There’s a romantic undercurrent to the album. What’s it like working together as a couple?

Kat Day: We live and work together, which I’m sure for some people would drive them crazy, but for us it just works. Being in Berlin, we’ve had this space of just being together, creating our work together, so it naturally comes into the songwriting. You can go days without seeing anyone here though so the album is very much of its own sphere as well – you’re in your own world and that’s how we were when we were making our own demos.

Nicholas Wood: It’s definitely more personal, but also it’s up to to the listener to interpret it as they will.

KD: We embrace being outsiders! We like that we can appeal to different crowds, and are able to play techno and electronic festivals as well as more guitar-based events – it’s who we are.

How has living in Berlin informed your aesthetic?

KD: Looking back now, we realise the city unconsciously influenced some of the mood and sounds of the record, for example ‘Lower Depths’ was the first song written in Berlin and it seems to capture the hedonistic vibe of the city. There are more opportunities to be creative in Berlin, there’s more space and the people are more positive – you can definitely get lost in a creative bubble. And we’ve got a whole room here that’s our studio – we certainly didn’t have that in Camberwell. Physically we have more room, and the more relaxed pace of life allows for time to think – you can concentrate and get lost here.

The album was made using Geoff Barrow’s “wonderful synthesisers.” Did you have a favourite?

KD: We really liked the Oberheim and the Micro-Preset, but he also had this collection of pedals which we found in a box, and my absolute favourite was this delay pedal made by a guy in Bristol who builds a very small amount of them, then releases them online and they sell out immediately. It’s basically a pedal that let us engage in all sorts of feedback craziness. We used that to process some vocals and instruments and we liked it so much that we bought one, as luckily a new batch had just been released.

What was the best piece of advice Barrow gave you?

KD: Turn up the mids was his most frequent request!

The album is more maximalist than your previous efforts. Was that intentional?

KD: We wanted to take advantage of the studio environment and use the tools available to create a bigger sounding album. That said, the minimalist core to our sound is still there. We really worked on all the textural dynamics of the record and we focused on all the different layers. We did try and make it as varied as we could.

NW: I think it was a natural product of the environment we recorded in, moving into a bigger studio and the new equipment. 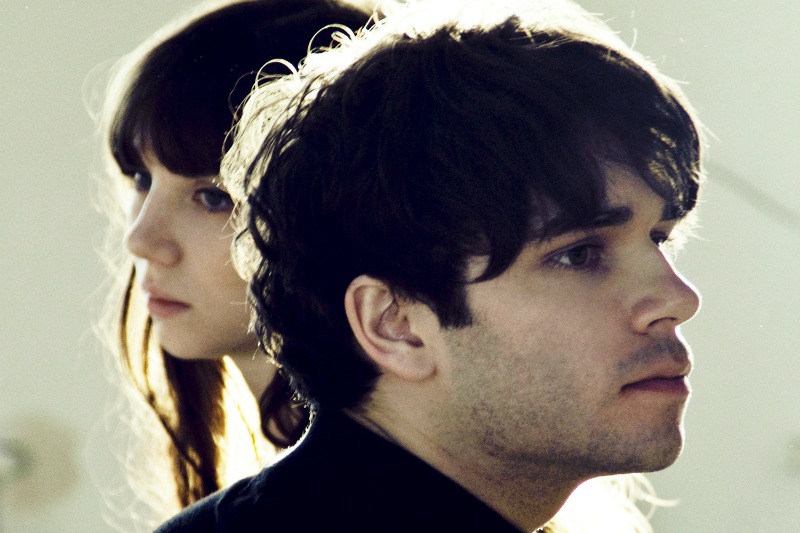 “We embrace being outsiders”

How does this idea of layering and feeding back play out in your visuals?

KD: I’m really interested in reprocessing things through machines and going back through my video cameras, as I love the layer of narrative that gets left along the way and creates this timeline of decay. I wanted the album cover to be quite alluring and tactile, like a beautiful object. It was originally made for a piece when I was at Goldsmiths but I re-photographed it and made it new.

It was to do with video game textures – I was printing game textures onto fabrics, so the material is supposed to represent raw material and bring it back to the realm of reality. I’ve really always been interested in texture and how the brain reacts to textures, in thinking it’s real even when it’s just a projection and it’s just light, yet you can feel it in your fingertips. I’m still working on the visuals for our new live show but again, a lot of re-processing using computer game programs and other DJ programs, and a lot of pushing nature through machines and giving them a digital life.

Can you expand on the idea of game textures?

KD: It’s not games as such, it’s the development platforms that are used to build them. For example, Unreal Engine, Unity and a 3D program I often use is Blender (it’s how I built and animated the video for ‘Fields’ on our last album). I’m not into computer games per se, but I just like the texture of them. I don’t really approach them like games but I treat them more like an artistic medium.

You’ve namechecked experimental filmmaker Hito Steyerl as a touchstone on the album – can you tell me how her work has influenced the visuals?

KD: I am a fan of her work and of her writing, but stylistically her influence is not obvious. Her recent show at KOW gallery in Berlin was great, and I particularly loved ‘Liquidity INC’, but her writing is perhaps more an influence on me, especially ‘In Defense of the Poor Image’, in which she talks about the production, distribution and consumption of digital copies via the internet as an act of ‘imperfect cinema’ against the fetish of the perfect pixel.

Thinking about it now, writers such as Laura U. Marks, Thomas Metzinger, and artists such as Eva Papamargariti, Lawrence Lek and Sabrina Ratte are perhaps more influential on my approach to making video.

How do you think the cinematic plays out in your work, and where would you like to take it next?

KD: The soundtrack to Under the Skin by Mica Levi was particularly inspiring to us while we worked on this record. We’d love to compose a soundtrack for a film one day and are looking into the idea of doing a short film and soundtrack ourselves at some point.

Read this next: If you like vintage synth music, check out the 20 best minimal wave records