Punk and horror have been strange bedfellows since the all-girl band in Slumber Party Massacre II were terrorized by a real life psychobilly.

Rob Zombie finally combined the genres in his excellent 2007 take on the Halloween saga, Joel Schumacher’s angsty The Lost Boys perfectly straddles the line — and these are not the only movies of their ilk. With Julian Saulnier’s Green Room we get the most accessible marriage yet of these two subcultures, but despite its mainstream appeal it hardly compromises its core audience.

So here’s the gist of Green Room: a hard-up DIY punk band called Ain’t Right are doing a van tour across America to spread the word about their music. They only release their music physically and have no social media presence — a fact that is noted like Chekhov’s gun — but are playing for $20 a night and siphoning gas to get to their next gig. When a San Francisco show is canceled because of permit problems, the booker kindly gets them another gig close by, on the outskirts of Portland. It’s all standard issue for anyone who’s done this kind of trip before: you play poorly attended shows and thank your lucky stars when a stranger likes your music enough to interview you for their college radio show, gives you a place to crash, or offers you an unexpected gig.

In the case of Green Room, the random show is essentially doing the work of that horror chestnut “I’ll be right back” — you probably won’t be right back. But what makes Saulnier’s follow-up to his critically acclaimed Blue Ruin so different and refreshing is how it utilizes the concept of punk rock authenticity to guide its narrative structure. In the subcultures of punk and horror, there exist codes only recognizable to those in the know. While fans of both love to see some of those codes broken — like the self-reflexive narratives in most of the late Wes Craven’s work — there is a certain amount of the norm, so to speak, that needs to be adhered to, lest your audience denounces you as inauthentic.

Green Room synthesizes this commonality between punk and horror. You shouldn’t have to explain to a horror fan, for instance, that a vampire can’t go out in the sun or that a werewolf’s transformation is triggered by a full moon. Punk classifications go the same route, and “true believers” (which itself sounds indebted to something more villainous than a love of a music) can easily tell you the difference between oi, youth crew, and other niche strains. Green Room winks at its crossover audience when Ain’t Right make their way to the rural Oregon roadhouse where they’ll get to play their make-up matinee. After being warned that the crowd is primarily skins, one band member asks, “Are they SHARPs?” It’s a moment in the movie that says to the audience, “You are either one of us, or you’re not”. A SHARP is a SkinHead Against Racial Prejudice, and no, this audience most certainly is not made up of SHARPs.

The band are only vaguely warned of the politics of the skinheads they’ll be performing for, but on arrival it’s clear they’re to be confronted with white supremacists of a number of stripes. To hint at their own politics, they punctuate their set with Dead Kennedys’ ‘Nazi Punks, Fuck Off’. It’s another moment that invites the knowing part of the viewership to share a secret with the movie; the band never reveal their plan, nor do they explicitly say what song they’re covering, just that it’s not their own. And while their performance is greeted with beer bottles and spit (although nothing more aggressive than that, and frankly, that’s also a sign of appreciation), they fully endear themselves to the audience while playing the harder parts of their catalogue.

At this point in the movie, it’s hard to tell exactly why the band is going to get trapped in the hole backstage. It’s only by chance that they see something they shouldn’t in the makeshift green room of the venue and become accessories to a vile act. But the band is unwilling to look the other way without the situation being handled properly and the venue workers call in the owner, played by Patrick Stewart, who is the most nefarious of them all. His instructions to ameliorate the situation nod to another code: he asks only for scene members who wear red laces in their Docs. Depending on the scene, this could either signal that you have socialist politics or that you’re a racist. Of course, here it’s the latter. What unfolds is akin to a home invasion horror replete with guts-out gore of both the slasher and animal attack variety. 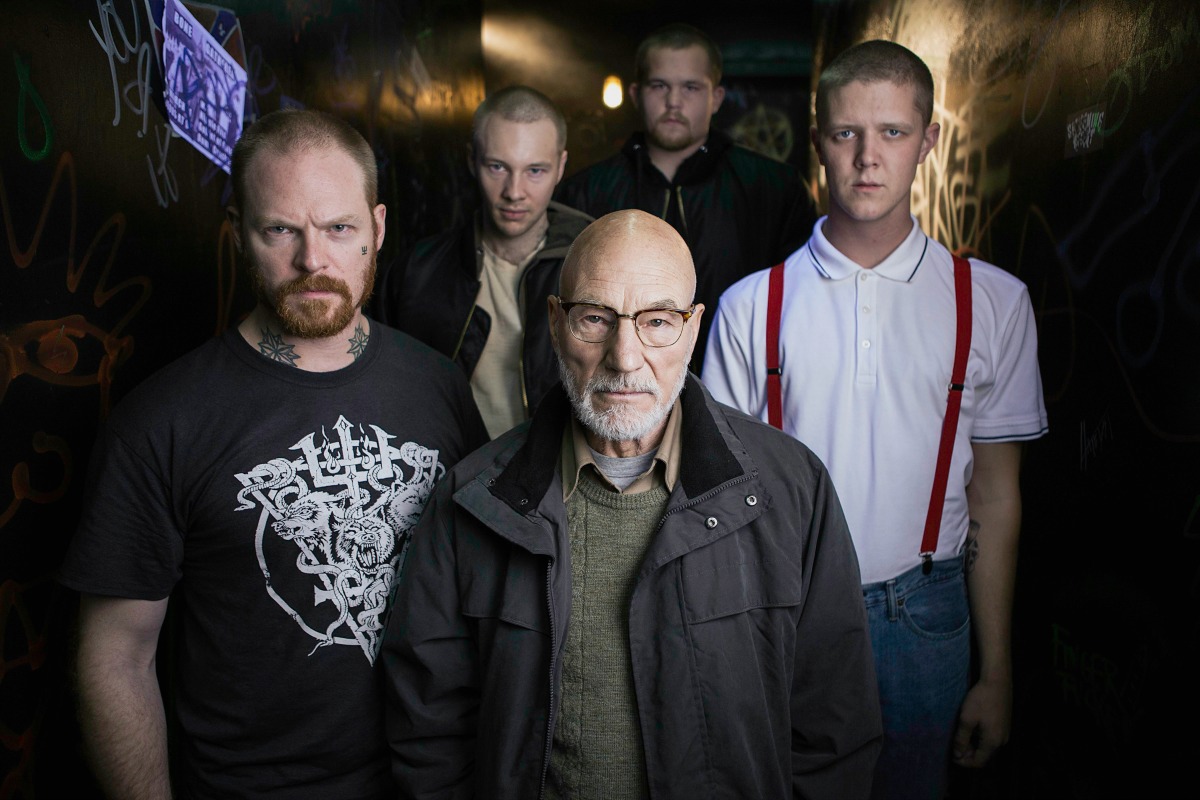 An odd thing keeps the band close throughout this harrowing experience as they continually come back to one of the questions their host in San Francisco asked them: who would be their desert island band? In their initial interview for her radio show, only two band members answer, picking The Damned and Cro-Mags. They’re perfect responses, but unlikely to be true. These aren’t catalogues that last you a lifetime, but they’re less canonical than, say, The Clash or X — they’re rough enough, but not too mainstream and not too obscure.

As the situation descends, though, each member starts to reveal their truths. It’s a silly conceit, but it works towards revealing a certain kind of honesty that comes out in horror when things go particularly awry. Often this is when people begin to confess the most egregious parts of their humanity — shit, that’s the whole premise of the Saw series — but here, it focuses on the supposed purity of heart that’s at the core of punk rock, and makes liking Simon and Garfunkel or Steely Dan their gravest sins. This type of playfulness mixed with the film’s utter carnage is what makes it so engaging — it knows how to keep both audiences committed with its dedication to the subcultures.

For punk fans who do not necessarily care for horror, Green Room is, at least, one of the first movies in a long time that features a genuine representation of the scene in mainstream entertainment — it’s been over a decade since SLC! Punk was released, and its recent sequel was its own kind of horror. And unless you are truly terrorized by room entrapment or extreme gore, the movie is not especially scary for anyone who is chasing a fear-high when they engage with the genre. Green Room is satisfying because it builds the same kind of tension you expect from the most explosive punk songs. The music and the storytelling meets perfectly in the middle — especially if you are fluent in both languages.