People who stream music are buying vinyl, but not always listening to it

Streaming is boosting vinyl sales but attitudes are changing when it comes to usage.

The BBC reports that a new poll by ICM shows half of those surveyed went and bought an album on vinyl after first listening to it online. However, of those who did buy a record nearly half did not listen to it yet.

The report also points out this behaviour is most prominent in users of ad-supported services such as SoundCloud and YouTube, the sort of services most frequently attacked by artists for providing free access to music. 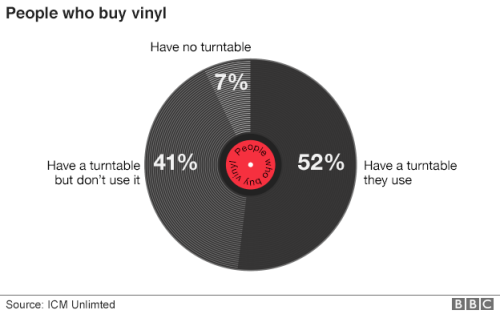 But while the report’s key points offer a positive spin on the ongoing streaming vs physical format debates, the BBC found that the behaviour of younger buyers, those between the ages of 25 and 34 who are behind the bulk of purchases, is aligned with the worst stereotypes.

One student told the BBC the “vinyls” were for decor and he doesn’t play them before adding “it gives me the old-school vibe.” Others said they bought vinyl to support artists while 50% of consumers in the report identify themselves as “collectors.” Clearly, the new generation has a very different idea of record collecting than the previous.

Perhaps the young vinyl buyers who don’t listen to their records, or don’t own a turntable as 41% admitted, simply need a guide to the best turntables?