Update: The band have posted a second teaser to Instagram.

This one features music, and shows a woman tied to a tree while men with swords engage in a ritual dance.

After wiping their presence from the internet on Sunday, clues to the group’s eagerly awaited ninth album are beginning to roll in.

Radiohead have posted a cryptic video, their first update since ‘disappearing’ from the internet on Sunday (April 30) amid rumours their new album is imminent.

The first update from the Radiohead camp came late on Monday evening when long-time producer Nigel Godrich shared an intriguing page from Plot Genie Index, a 1936 book by Wycliffe A. Hill designed as a guide for writing noir and pulp fiction. The page he shared concludes a list of plot devices before beginning a new list of “obstacles to love”. Take a look at it below.

At 6am GMT the following morning, the band then posted the below video on their Instagram. The stop motion clip sees a bird singing – an image in keeping with the rumoured title of the album, Dawn Chorus, also the name of the company founded by the band in the run-up to their next release.

Fans were the lookout for some kind of development this weekend after mysterious leaflets were sent to fans in the UK featuring the phrase ‘Burn The Witch’. April 30, the day the leaflets were received, is celebrated in Germanic folklore as Witches Night, while the first Sunday in May is traditionally International Dawn Chorus Day – referenced in the name of the company the band founded in the run-up to the release.

On Sunday afternoon, fans began to notice the Radiohead website appeared to be “fading”. The opacity of the site was dropping every 10-15 minutes, as noted by Reddit users. It was speculated a new website and album may be launched when opacity reached zero. 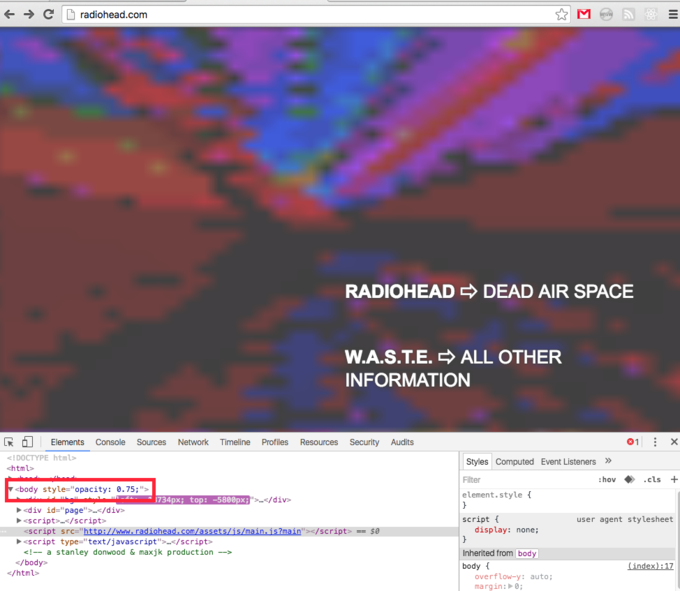 At roughly 6pm GMT, as the website went blank, so did the group’s social media accounts: their Twitter and Facebook profile pictures were replaced with a white, blank image, with the group’s previous posts disappearing.

Thom Yorke and Johnny Greenwood also deleted tweets on their accounts, while Colin Greenwood began following Has It Leaked, a Twitter account reporting on album leaks as they happen.

The new album, their ninth, is now speculated to land any moment.

Momentum has been gathering for a while in the Radiohead camp: first came the announcement of a Radiohead world tour for 2016, then word from longtime visual collaborator Stanley Donwood calling the new album “a work of art”. Last month, there was the accidental revelation by a US podcast host that There Will Be Blood filmmaker Paul Thomas Anderson had directed a new video for the band in her LA home.

Catch Radiohead on tour at the following dates:

Read next: Radiohead on screen – the 9 best uses of their songs in film and TV