Movement is a Swiss Army knife plug-in that adds rhythm, dynamics and a slice of chaos to any sound

The best plug-ins are always the ones that fill some kind of niche function you never knew you needed. As Scott Wilson discovers, the first effects plug-in from Output is one of them.

From its description, Movement seems like it might be a tool to help producers make interesting rhythms like Ableton’s Beat Repeat, but in reality, it’s both tricky to describe and much more versatile.

Output bills it as a device that adds rhythms to any input in real-time, but it’s not just for making percussive loops – though it does that if you want it to. It fills a similar niche to an arpeggiator if you use it on a synth, but the effect is more textural: some presets turn analog synth chords into a pulsating monster, some will turn a monophonic note into a dreamy ambient backdrop. Use it on a drum machine snare, and you can even create what sounds like a massive timpani roll if it’s set up in the correct way.

It’s really more of a musical Swiss Army knife. If you want to shred a sample without too much effort it’ll do that, but if you need to create a quirky drum loop it’s capable of that too.

When you load Movement, you’re given four rhythm generators across two engines on either side of the interface. In the centre is an XY performance panel which can be linked to any of the built-in effects. As interfaces go it’s incredibly clear and uncluttered, inviting you to start using it without the need to read a huge manual first. Even if you’re fairly new to production you’ll feel right at home – it’s laid out more like an iPad app than a traditional plug-in.

Movement creates its sounds with three sources across four rhythm engines: LFO, step sequencer and sidechain, each of which modulate volume, panning and parameters of the other effects. This has an uncanny effect on simple synth patches; often the rhythm engines will add new layers to the original sound, meaning you’ll have the original note sitting underneath like a ghostly echo while tiny chunks of sound resonate overhead.

To make any of the rhythm engines modulate an effect, you just drag and drop the corresponding number onto the knob and it ties the two together. The interface is animated, so it gives you sense of how the effects will behave even if a sound isn’t playing. The effects you can drop in are fairly basic: just delay, reverb, compression, distortion, EQ and filters. But they sound good, and Movement is more about how these elements work with its modulation system, which is the real core of how it works. If you have no idea what modulating the resonance on a high-pass filter means, let alone sounds like, Movement is a really straightforward way to get acquainted with what can be a painstaking process. 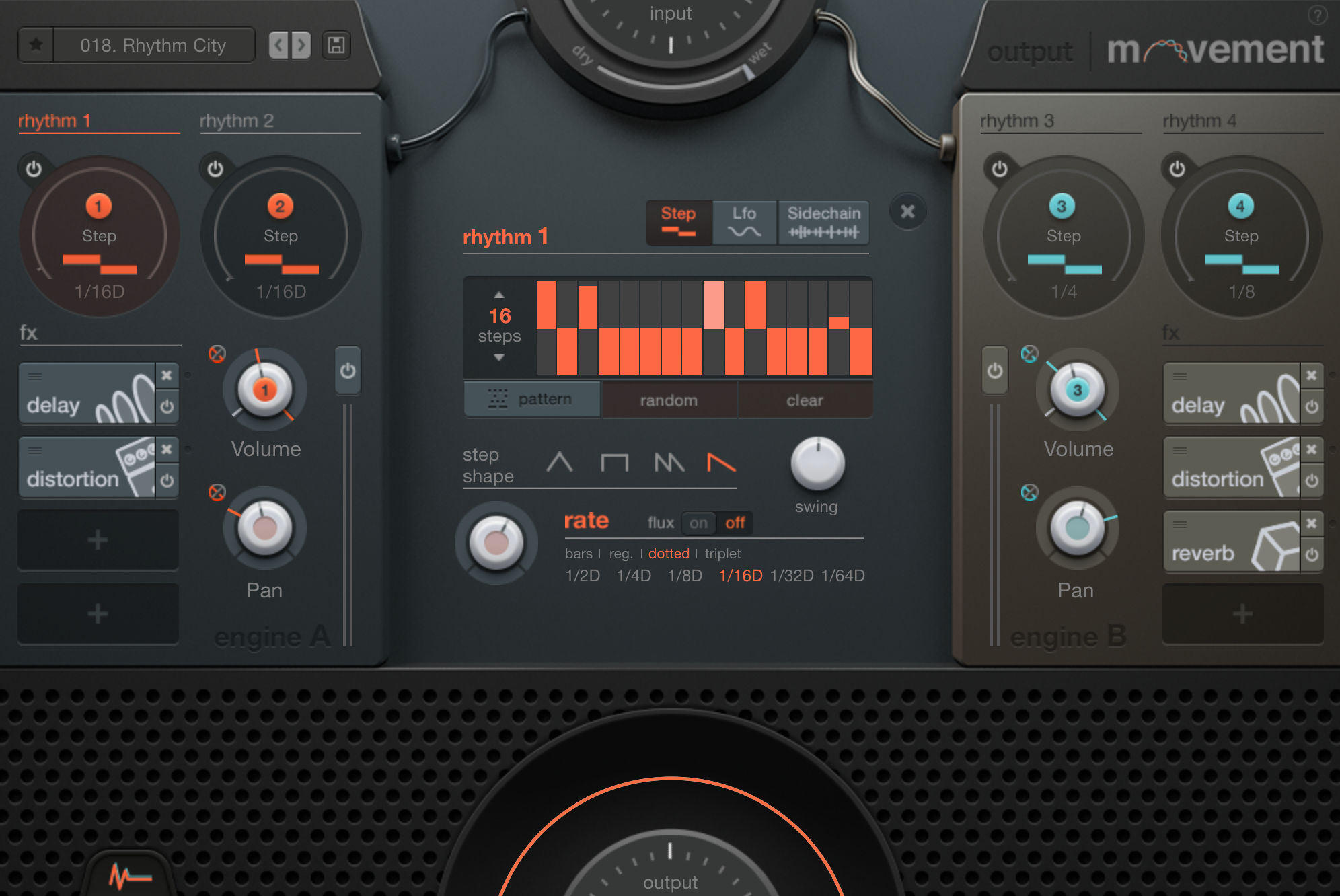 Movement’s three rhythmic sources each have their own distinct character, which can be the same across the four rhythm engines, or mixed and matched to create wilder effects. Broadly speaking, the LFO will give you a smoother, more rounded sound, the sidechain will create a pumping effect good for dance music and the step sequencer will create the most extreme rhythmic effects. You can change the time signatures for each of these and mix triplets with 4/4 bars if you want. There’s also a “flux” mode that adds an element of chaos to the mix.

The LFO is the one to use if you just want to make your sound vibrate a little or a lot. It’s not like having an “oscillate everything” knob; changing the rate at which the sound moves requires you to change the time signature in discrete amounts, meaning that it’s tied to a regular pulse that you don’t have much real time control over. It’s what you’ll use if you want to turn flat, bread-and-butter synth sounds into rippling liquid pools and create bouncing rhythm patterns.

The step sequencer is the most fun, shredding the smoothest sound sources into tiny angular chunks. It’s most commonly tied to the volume and panning controls and used to drop or move the sound between channels in extreme ways. It creates an effect that’s akin to an arpeggiator, but much more dynamic, allowing you to create complex 32-step patterns as well as create completely random sequences. If you want to add some instant deconstruction to anything, this is how to do it.

The sidechain function is my least favourite. If you create big room dance music it will probably get used a lot, but it feels like a function added to satisfy a certain market rather than for the ability to create interesting sounds. Output does deserve credit for making it so easy to use though; there’s a link in the app itself that will tell you how to set a sidechain up with Movement if you don’t already know. 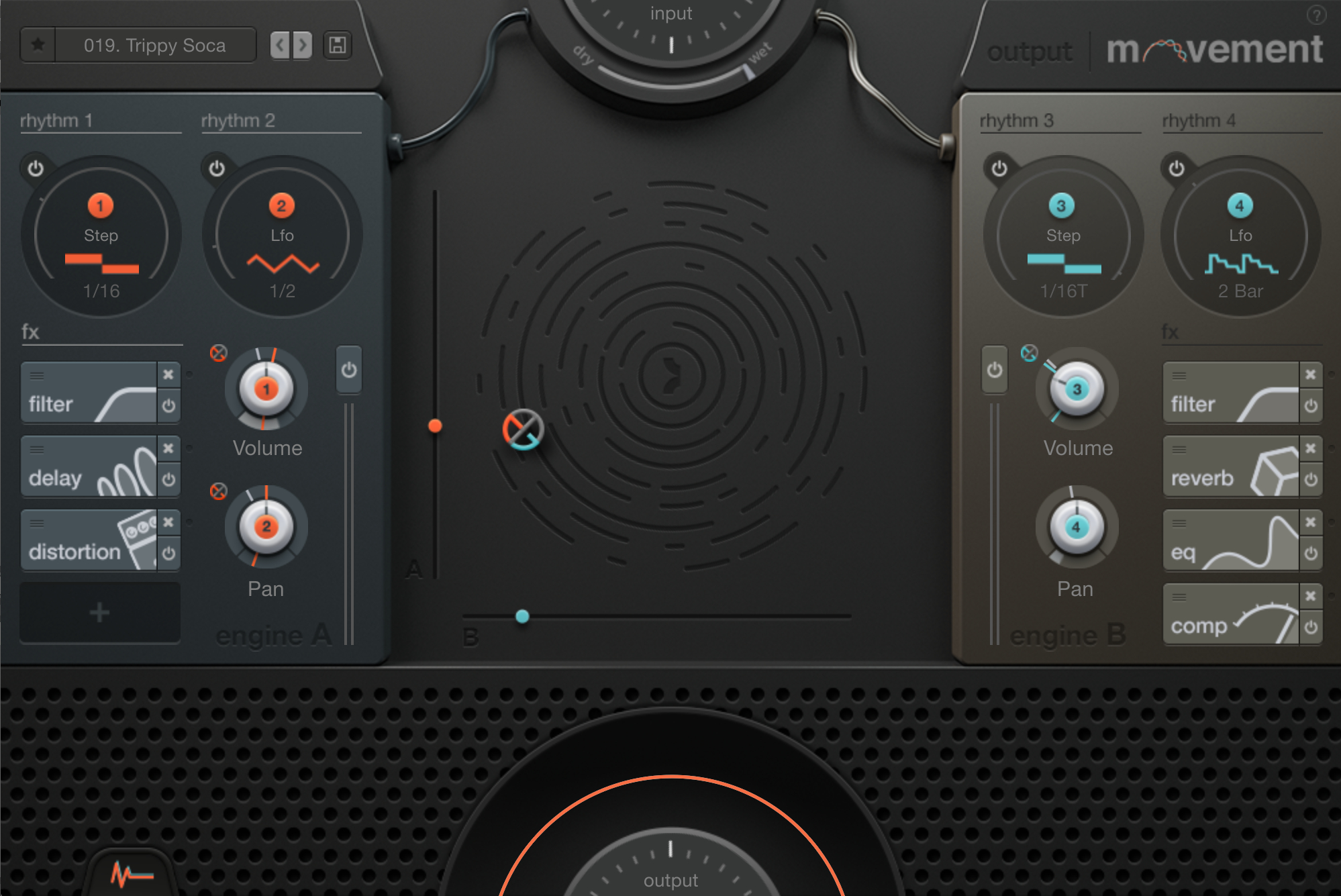 After using Movement for a few weeks, I can’t imagine not having it in my plug-in folder

Anyone familiar with Native Instruments’ Reaktor software or the near-infinite possibilities of a Eurorack modular system will probably be quite sceptical of Movement; if you’re knowledgeable enough to operate either of those instruments then it may not get much use. On the move though, it offers the power of a small Eurorack skiff for half the price of one module. It’s a plug-in that might find its way into a few live setups; the performance panel makes it simple to control lots of parameters at once from just a few knobs on a MIDI controller, and from my time using it with Live, it seems very stable.

If you’re a complete novice and don’t want to go any deeper than the front panel, there’s enough in Movement’s 300 presets to satisfy lots of different requirements. Output’s marketing for the plug-in makes it seem as if it’s an effect aimed at the EDM producer market, but there’s far more to it than that. Sure, it’s got a sidechain mode, but half the fun is pushing each of the presets to their distortion limits or putting a few kick drums in to see what kind of weird pinball sounds you can make. Even if all you want to do is make harsh noise, Movement would have a place.

After using Movement for a few weeks, I can’t imagine not having it in my plug-in folder. It’s the kind of thing you’ll want to use very sparingly, but if you’re struggling to make a track come to life then it’s an incredibly easy way to transform your sound. The $149 price tag will be a little steep for some, but considering it behaves more like an instrument in its own right, it’s unlikely you’d feel short-changed if you like making wild, experimental sounds, queasy ambient pads or big leads.

Read next: The 9 best VST effects on the web