As Radiohead hit the road in support of their new album, Chal Ravens heads to London’s Roundhouse to find the band in a more reflective and sombre mood after the itchy mania of The King of Limbs.

If A Moon Shaped Pool turns out to be Radiohead’s last album, it would be a fitting end for a band who’ve always seemed like they’re searching for a new equilibrium. Success is just what happens before the restlessness sets in again; the smash hit becomes an iron lung and the discomfort spurs them on.

Not that retirement seems imminent – in fact, the 40-odd-year-olds seem as dedicated as ever to making life difficult for themselves, taking on Jonny Greenwood’s recently honed skills as a film composer on the uneasy orchestral sweeps of ‘Spectre’ and ‘Burn The Witch’. But the band’s ninth album feels like a conclusion in more ways than one. Materially, the songs feel more familiar than usual from a band who’ve built their reputation on balancing emotive songcraft with studio experimentation. Partly that’s because they are; ‘Burn The Witch’ has existed in some form since at least 2006, and ‘True Love Waits’, the live favourite finally given spectral piano form on A Moon Shaped Pool, is 20 years old.

But there’s also the sense of having heard certain ideas before – the dreamy guitar arpeggios recalling ‘Weird Fishes/Arpeggi’; the gristly strums of ’The Numbers’ like an aimless ‘Optimistic’. There’s no shame in that; plenty of great artists hang their career off just a couple of brilliant ideas, strip-mining their inspiration until the fans stop showing up. But it’s out of character for Radiohead, who now seem to have settled into certain rhythms and shapes, as if they’ve finally found the comfy spot after two decades of tossing and turning. 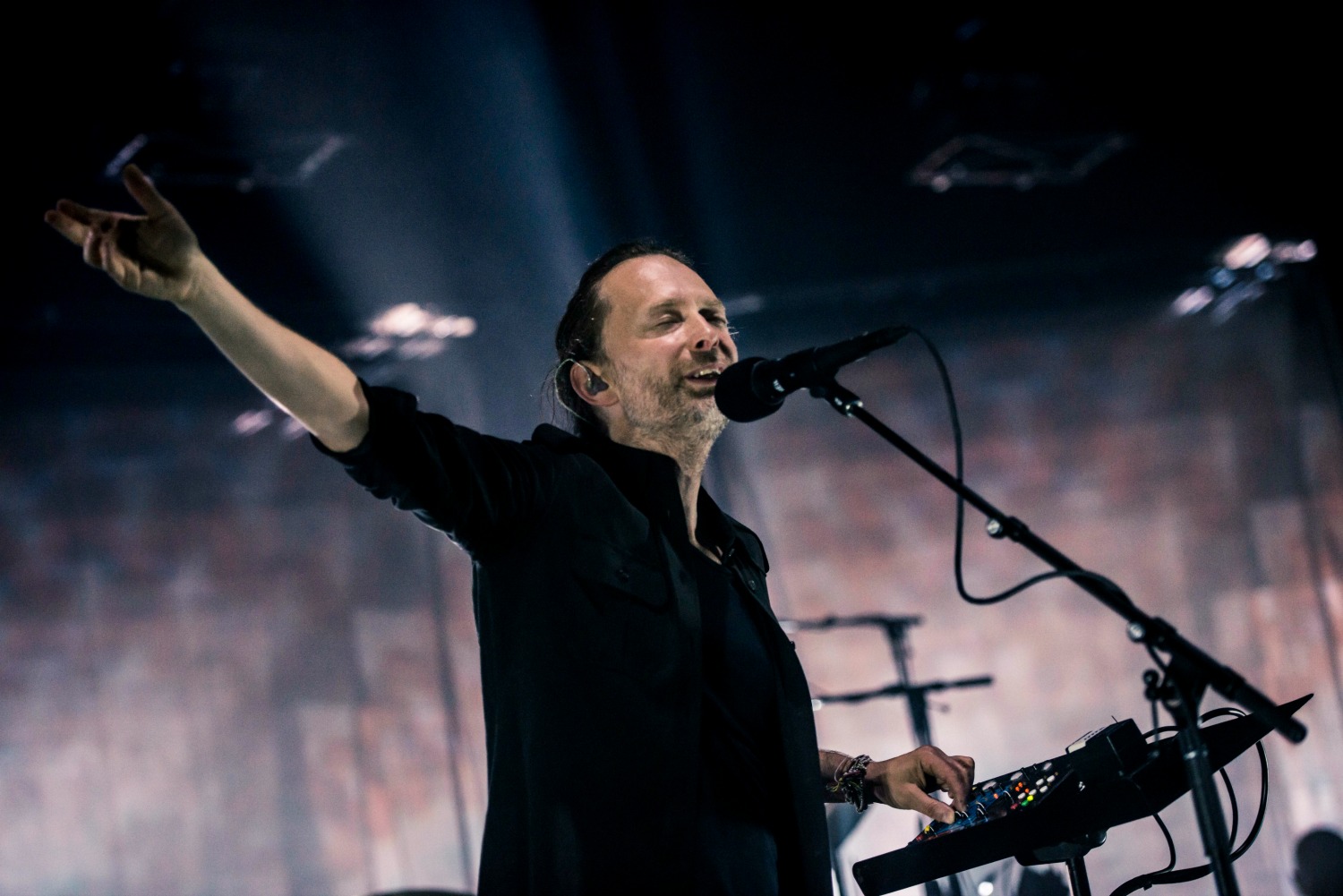 Underlying this sense of finality is the end of Thom Yorke’s marriage of 23 years, “half my life” as ‘Daydreaming’ reveals in a haunting reversed vocal line. Placing ‘True Love Waits’, a song almost as old, at the end of A Moon Shaped Pool feels like an exorcism, a ghost finally being laid to rest. On this tour, which began in Amsterdam last week, the song has been played only once so far. Kicking off a three-night run at the Roundhouse in London, it makes sense that they’ve chosen such a compact venue for their first gigs in four years. For all their luscious orchestration, these new songs are intimate, tender, broken; the quiet majesty of late Talk Talk comes to mind, and you’d never catch Mark Hollis playing the O2 Arena, venue of Radiohead’s last London gig.

As they did in Amsterdam a few nights earlier, they open boldly with a run of five songs from A Moon Shaped Pool, starting with the febrile and grandiose ‘Burn The Witch’, which sees Jonny grabbing a bow to attack his Telecaster like a foreign object, before a lengthy wallow through ‘Daydreaming’ (almost painful to hear, so small and soft and sad), ‘Decks Dark’, ‘Desert Island Disk’ and ‘Ful Stop’. Clapping seems wrong. Thom’s lyrics have grown increasingly oblique over the years; on ‘Daydreaming’ he masks his emotion by disguising the most revealing line. Knowing that a crowd are going to cheer on your sorrow might well encourage a retreat into cryptic gestures.

Regardless of the intimate setting, the Roundhouse is a charisma black hole; I’ve seen artists as shamanic as Patti Smith, normally capable of whipping fans into a near-religious frenzy, falter and fizzle on its broad, airy stage. Radiohead at this point are better equipped to play an arena than a small show, and the audience too seem unsure of themselves; awkward silences descend between songs and a mood of reverence prevails. With a set centred around this fragile new material, the choice of older material leans on intimacy – ‘Talk Show Host’, ‘Exit Music (For A Film)’, ‘You And Whose Army’ – making Holly Herndon and her glass-shattering data-rave aesthetic a strange choice for support act (she wins over the willing few). 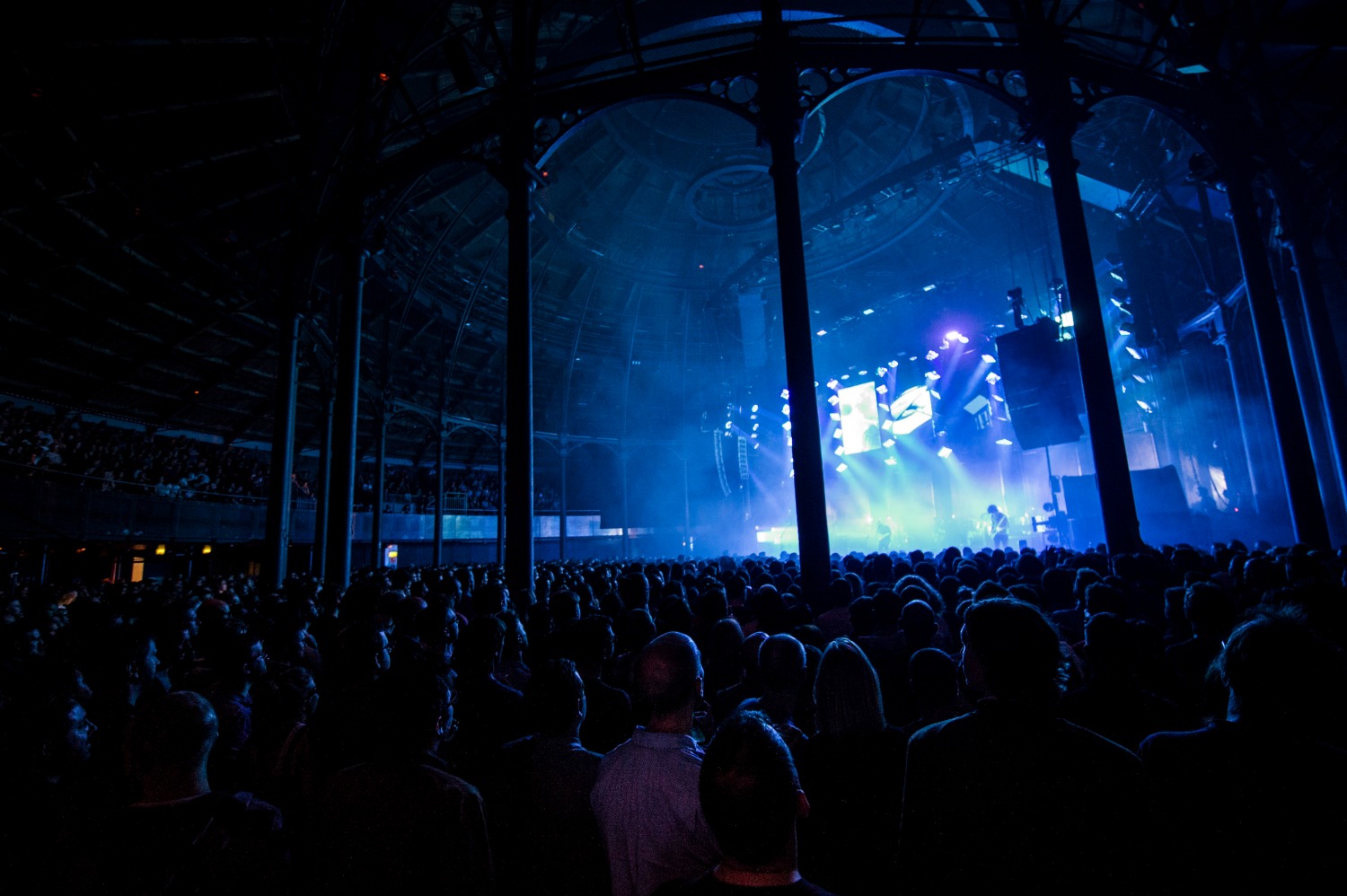 From a fan’s point of view the setlist order is objectively wrong. Front-loaded with diminutive pleasures until ‘Myxomatosis’ and ‘Idioteque’ throw some fireworks into the final stretch, it takes ‘2+2=5′ and ‘There There’ in the encore to shake up the room. “It’s all getting a bit hitsville,” warns Thom, before drifting into ‘Present Tense’, the slightest song on A Moon Shaped Pool. The final furlong turns out to be the icebreaker, as Jonny fudges the soaring synth line on ‘Nude’ and forces a restart, which Thom finds much funnier than his bandmate; another cock-up in ‘You And Whose Army’ and it’s like we can all finally get along. They close with the evergreen thrash-prog inanity of ‘Paranoid Android’; we cheer, they exit.

With the dad-dancing mid-life crisis of The King of Limbs in the rearview mirror, Radiohead have been able to inspect the damage up close on this latest chapter. For now, they seem to have settled into a groove – but A Moon Shaped Pool also feels like a necessary catharsis for a band who’ve been carrying too much baggage.

Read next: How do Radiohead’s resurrected songs on A Moon Shaped Pool compare to the originals?