19-year-old Desiigner has scored the most divisive rap hit of 2016 so far with ‘Panda’, but his rise to success has been dogged by allegations of plagiarism. Accused of ripping off Atlanta artist Future, the Brooklyn newcomer’s success has sparked debate about rap regionalism and where the line lies between homage and robbery. Al Horner finds him in London shrugging off the controversy and concentrating on what comes next.

“The night I found out I was number one in America, I straight PASSED OUT man. Turned up so much I passed out. Then next day, woke up, went to the studio and SNAP! Cooked up another one, another hit!” Sidney Royel Selby III talks like he raps, and raps like a rusty motorcycle engine coughing into action: a fast, dirty baritone rumble that stutters and tumbles. It’s late spring in London, where the New Yorker is recovering from a late night in the company of Pusha T. It was a wild one. Not pass-out level wild on this occasion, “but still pretty crazy”, he grins.

It’s probably easier at this point for the Bed-Stuy 19-year-old to count the moments over the last six months that haven’t been a blur. This time last year the rapper now known as Desiigner was a high school nobody, singing to girls at recess, trying to impress. One thundering ode to a black-and-white BMW later, and – as he points out at least six times in our thirty minutes together, with loud, giddy enthusiasm each time – he’s top of the US Billboard chart. When most rappers sign to a label, it’s announced via a press release. Selby signing to G.O.O.D Music in February was announced in front of 18,000 people at Madison Square Garden, and millions more at home. It’s still new to him, spending days in la-dee-da hotels like the one we meet in today – the kind where World Cup-winning footballers pose for selfies in the lobby and everything is expensive marble. “Been a crazy ride but I’m out here just enjoying it,” he beams. “Fuck everything else.” 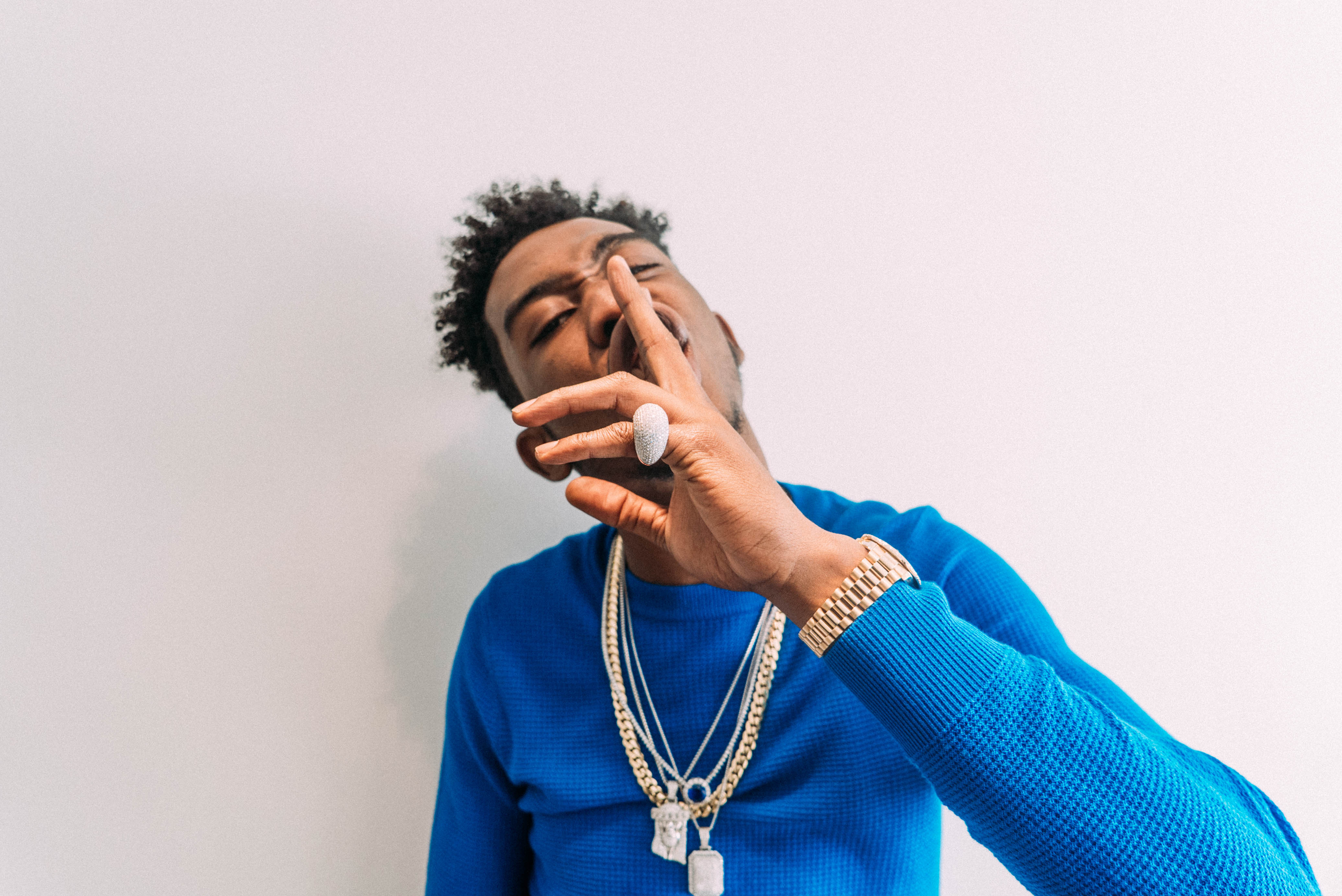 “I don’t sound like nobody. This is my funk, this my style. Ain’t nobody got it like me.”

Ah yes. Everything else. ‘Panda’, Selby’s adrenaline-rush debut single – released last year before Kanye West sent it stratospheric by featuring it on February’s The Life Of Pablo – has been streamed over 500 million times in just a few months. Everyone from Lady Leshurr to Lupe Fiasco has since jumped on the ‘Panda’ beat, bought for $200 from a mobile phone shop employee-cum-bedroom producer based in Rochdale (Selby is hoping to hook up with Menace, aka Adnan Khan, while he’s in the country). But its massive success has been marred by accusations that the track is a cheap knock-off of the sound Future has been fine-chiselling for years. Propelled by a shout-out to Future’s hometown (“I got broads in Atlanta”) delivered in a similar scattergun flow, the similarities are such that when Kanye first aired ‘Father Stretch My Hands Pt 2’ – the track that samples ‘Panda’ – at his Madison Square Garden album launch for Pablo, most presumed it was the Purple Reign master himself.

The fact that Selby hails from New York, a city with a chequered history of borrowing Southern hip-hop sounds and repurposing them, makes the matter more problematic still, as writer Andrew Friedman recently pointed out. Selby has tried to play it down in interviews before. He and Future are “both blessed in our ways” he told The Fader earlier this year. “I actually laugh at it, there’s nothing to get upset about… I think he’s a great artist and I do what I do.” Today his publicist warns not to ask about the matter, making ‘Panda’ an odd elephant in the room – the song we wouldn’t be here without, but whose baggage it’s difficult to ignore.

“I say this. This is my funk. I don’t sound like nobody,” he says, when I ask then who he does count as influences, the artists he wouldn’t mind being compared to. “This is my funk, this my style. Ain’t nobody got it like me. This is me, man!” He’s right in a way. Desiigner in person is like a human exclamation mark – both in terms of his loud, giddy energy and his tall, beanpole build. At live shows, he contorts and bends it like a gorilla twisting a clothes hanger, wearing a look like there’s a few millions volts of electricity running through him. There’s no question he’s musically taken blatant cues from Future’s deep, gravelly trap. Dig deeper though, and there’s a different personality here to the languid fur-coat cool of Nayvadius Wilburn. The top comment on a YouTube live video of him performing ‘Panda’ gets it about right: “Damn, this man is on a drug that haven’t been invented yet.” 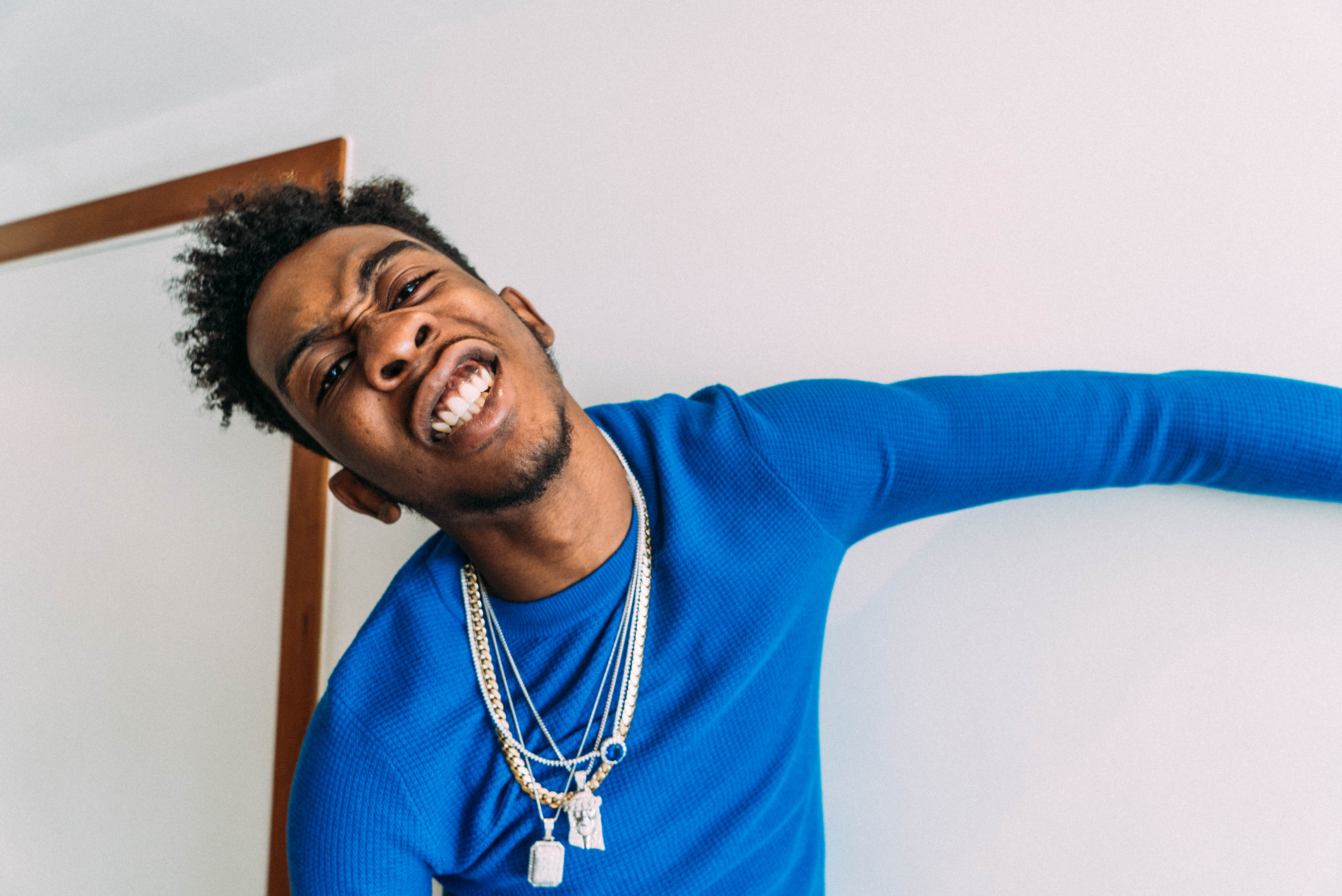 “I got shot when I was 14. I saw a different life but I had to leave it alone, cos I knew my real life was music.”

Selby grew up in Brooklyn surrounded by music at every turn. “We were on that old school. My dad, he was on that Funkadelica. I go to my friends, they listening to hip-hop. I go to my sister, she listening to reggae. I go to my cousins, they listening to all types of shit.” When he hit his teenage years, he fell into some dark habits. “Brooklyn’s hard growing up, you feel me. I got shot when I was 14. I had to take the hard route to get me out. I had to learn the hard way. I saw a different life but I had to leave it alone, cos I knew my real life was music. I wasn’t really that kid.” He calls it “a definite turning point, a lesson learned. I learned that wasn’t the way to go. It changed me, ASAP.”

What happened next set him on a different course. “My pops, he gave me my first rap book right after, on my 15th birthday. It was a rhyming dictionary. I used it to learn every word, rhyme it. I’d go through every page, learn to how catch my own flow. It’s how I learned to do it like this,” he says, breaking into the first verse of ‘Panda’.

By this point, he was already a hip-hop obsessive. One of his favourite artists, inevitably, was Kanye. “I’m big on Kanye’s music, his creativity. I see the type of art he was delivering before – I was listening to Kanye when I was 12, 13. You gotta respect his message, his art.” After a few years rapping under the name Dezolo – one single, the Migos-ish ‘Danny DeVito’, is still floating around online if you look hard enough – he received a call from GOOD Music. Kanye had heard ‘Panda’ and wanted to meet. Desiigner flew to LA, where Ye played him what he’d done with his track for Pablo parked up at LAX. “You gotta understand, I’m looking at Kanye every day, seeing Kanye in the news… then I’m there with him. So it was a great time, a great moment. And now I’m here.” 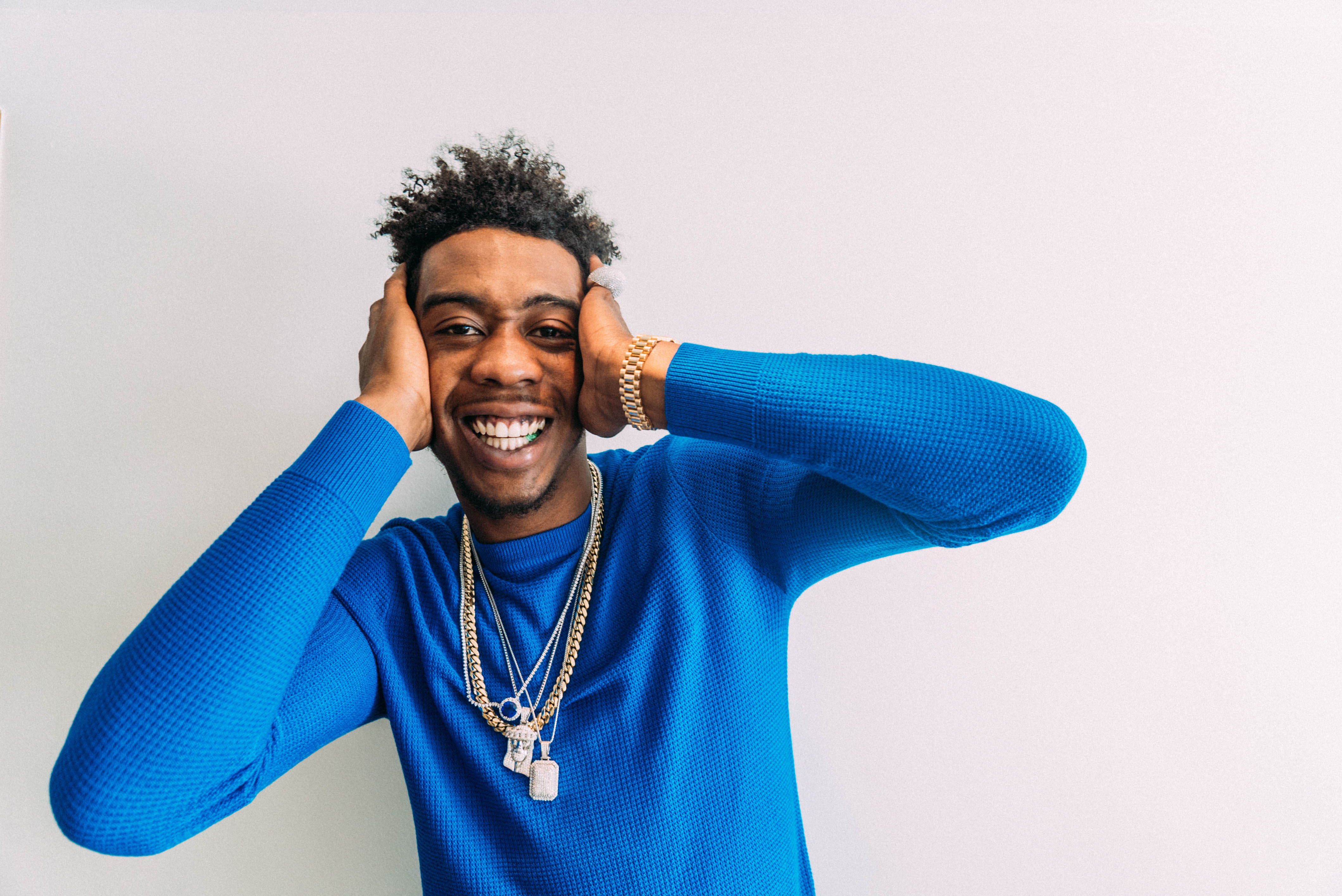 “I’m straight from New York so there’s gonna be that Brooklyn sound on my album. You can believe that.”

Now he’s here, sure. But staying here, at the top of the rap pile, is the tricky part, and many are already writing him off as a one-hit wonder. He’s working at the moment on the debut Desiigner album, which he says will come later this year. No update is offered on his Trap History Month mixtape, which was rumoured to land in February.

“You gonna hear beats like ‘Panda’, you gonna hear beats like The Weeknd, you gonna hear soul. You definitely gonna feel it,” he says, adding that there may be appearances from his GOOD Music peers on the record. “Signing with them was like, ‘I got music, I got hooks, I got verses, let’s do it. Let’s get in the studio and make a change.’ I’m hyped that I’m around them but I’m an artist also, so I’m not like I see them like gods and me the mortal. I’m like, ‘let’s get in the studio, let’s do it.’ So watch out.” He’s recently been recording with Travis Scott, he casually slides into conversation.

After the controversy around ‘Panda’ and the Atlanta sound it borrows, is he going to make an effort to mine New York hip-hop heritage for his album? “I’m straight from New York so there’s gonna be that funk, that style. That Brooklyn sound, you can believe that,” he insists. “It’s gonna be a different type of energy. That rush, that movie feel. It’s not even a pressure to follow up ‘Panda’. It’s more like I been waiting for this. I’m out here making music for people to enjoy and dance to. 10 million people heard ‘Panda’? Cool, let’s give it to the 100 million people on the planet that didn’t hear it now.”

It’s hard to know what’s hype and what’s truth – for all Desiigner’s talk, and all the talk about Desiigner, there still remains only four minutes and seven seconds of his music around to judge, five months after ‘Panda’ first growled its way online. The man himself certainly seems to have confidence in his potential, though. He shoots me a grin as we part ways and he starts rapping along to a new track on his phone. “Oh shit, EVERYONE gonna overdose on this one.”

Read next: Frauds in Atlanta? Why the controversy over Desiigner’s ‘Panda’ goes deeper than you think