The dreamy club fantasia of Jessy Lanza: Why Oh No is one of the best albums of 2016 so far

All this week on FACT, we’re celebrating the best albums of 2016 so far. We’ll be bringing you an interview a day with an artist whose record has helped define the last six months. First up – Jessy Lanza on how she reveled in Japanese electronic pop and fear of rejection to craft her spell-binding second album Oh No.

The first time I saw Jessy Lanza play, opening for The Junior Boys on a warm winter night at Los Angeles’ Regent Theater, it was immediately clear she’d be back as a headliner before long. Playing songs from the then-unreleased Oh No, she trapped her audience in a flurry of whirring drum machines and blocky synth patches. More than anything it was her energy as a singer, the way she danced with her voice, her expressive range making elegant leaps like an acrobat.

Lanza doesn’t remember the show with quite the same glowing affection as I do. “I had this stomach thing and was like, ‘Oh no, I’m gonna barf,’” she recalls when we meet. We both laugh, her maybe out of mild embarrassment, me out of disbelief. I think she must be mistaken, maybe misremembering another date. San Francisco? San Diego? It’s silly not to believe her, but that was the effortless spell of her performance, the spiraling power of that voice.

Oh No waits a full minute before unleashing her vocal, twirling an arpeggiated synth like a hypnotist’s pocket-watch on ‘New Ogi’, seemingly counting (…3…) us down with each (…2…) glassy synth pulse (…1…) until we’re in a state of total hypnagogia. Only after the sedation does she deliver her first line: “Baby you already know / Just look in my eyes and you’ll see it.” It’s a command, a promise and a hope all at once.

“Oh No is really about me dealing with rejection.”

What follows is more colorful and dreamlike than any place Lanza has taken us before, where unspoken feelings nearly scream out, and demands said right “to your face” go unheard. “If you’ve got doubts baby,” goes a line from the frustrated ‘Never Enough, “I make believe all about it.” And she does, spinning club fantasias out of her deeply intimate characters (“you” and “I”) while uncovering truths stuck in the space between. 2013’s impressive, Polaris Prize-nominated debut album Pull My Hair Back remains one of the most promising debuts in the Hyperdub catalog. Oh No, however, goes past that — it’s one of the label’s strongest statements.

The album is “really about me dealing with rejection. If I could say there’s any overarching theme for the record it’s being rejected or being afraid of not being able to survive rejection intact,” she tells me after I confess how difficult it is speaking to her a few days after the end of a relationship in which her music played an important role. But she gets it. Oh No gets it.

“Talking about it now and just saying this out loud – [I] realize how many of the tracks came from that place [of] feeling rejected, being scared of rejection,” she goes on, listing half the album’s songs and many of its highlights. As musically fantastical as Oh No is, the grey areas it explores are realistic and scary. That initial fear, though, burns up like fuel on re-entry.

Lanza holds nothing back on these songs. ‘VV Violence’ hits with a whipping immediacy as Lanza shouts, “I say it to your face but it doesn’t mean a thing, no!” yet it couldn’t sound less defeated. Lanza is fierce, practically cocky, reflecting on rejection and heartbreak over her neon-hued flourishes. It takes the trope of the “confessional” R&B singer and blows it up like fireworks. While her lyrical leaps give the album its power, her production work (and the fluidity with which she mixes the two) is just as important. Though it brings to mind Junior Boys (a project Lanza has contributed to for years and whose founder Jeremy Greenspan contributes here) the album feels more like a modern tribute to Japanese electronic pioneers Yellow Magic Orchestra.

“So much of the music that Jeremy and I do is sample-based, which is something I also hear in Yellow Magic Orchestra’s music and their solo stuff. This care for loops and samples and non-musical sounds and more modular rhythms,” she reflects. It’s no surprise, this is music she practically grew up with. “I have one side of my family that is really quite obsessed with Japanese culture and lived in Japan,” she explains, “I remember them playing Yellow Magic Orchestra for us at family dinners. But it wasn’t until I was a lot older than I got into it seriously.”

It began with YMO before splintering into solo releases like Ryuichi Sakamoto’s Thousand Knives and Yukihiro Takehashi’s Neuromantic. She discovered her favorite, Haruomi Hosono, last. “They’re such technicians, and I think Hosono out of all of them seems the most technical, but at the same time their music has a warmth and playfulness there,” she says. Yet it wasn’t until Hyperdub boss Kode9 gave her records Hosono produced for pop singer Miharu Koshi that Oh No found its patron saint.

Like YMO, Koshi and Hosono crafted cutting edge yet playful pop music, but it didn’t stop there. The pair would bend classical compositions, R&B, opera and (most memorably) French chanson to their unique voices. In that same way, Lanza adapts their sound while playing double duty as both singer and producer. She cites their 1983 album TuTu as her biggest influence, and listening to a song like ‘Scandal Night’ it’s easy to trace Hosono’s meticulous arrangements and Koshi’s hiccuping coos to the DNA of songs like ‘Oh No’ and ‘Going Somewhere’.

“I felt more in control of this record, I felt like if people didn’t like it I was okay with that”

For all of the respect paid to them, Yellow Magic Orchestra and Koshi still feel under-appreciated. Lanza’s commitment to this material washes away any suggestion of simple appropriation and makes Oh No a powerful piece of criticism in its own right, championing a body of work that remains overlooked even by many electronic music fans. Her passion for these sounds and willingness allows her to subvert them just as Koshi and Hosono did to their own influences.

“I felt more in control of this record. I felt like if people didn’t like it I was okay with that, and that made me feel more in control and more confident,” she says. The result of all this emotional alchemy is the album’s taut, minimal peak, ‘It Means I Love You’. Echoing sentiments from the previous tracks, she delivers them with a cool confidence, creating a song about loss that comes from a place of control and strength. “When you go, walk away,” she instructs in a reversal of ‘VV Violence’’s “endlessly following” speaker, while ‘Going Somewhere’’s desperate plea to “just say you love me” shifts into the bold challenge: “If you want it, come and find my love”. 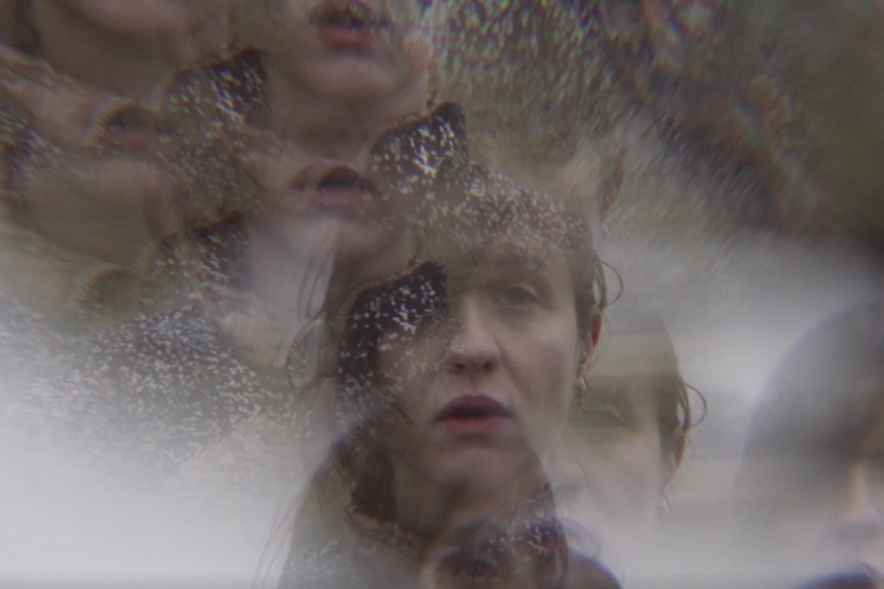 As Lanza’s lyrics sharpen in clarity, she strips away all of Oh No shimmering ordainment down to a single 4/4 beat which she dances on like a high-wire. And then she cuts even that, leaving only empty space — but rather than falling, her voice hangs in the silence to say what Oh No has cleverly danced around actually saying this whole time: “Look into my eyes boy and it means I love you”. It’s a careful variation on the album’s first line, but isn’t the same plea – it’s blunt and commanding, as if it took weathering each one of the preceding tracks to finally find the right words. In the moment when all the attention and focus is on Lanza like a floodlight, her shadow looms 10 feet high. “I always get really self-conscious about lyrics,” she says. I have no trouble believing it. To write music so honest must come with many doubts, but to sing it with grace takes even more strength.

Just as Oh No began shortly after Pull My Hair Back, Lanza is excited to start to work on her next album, she just has to get through this new tour first – as a headliner this time. “I think there were a few months where I was like, ‘I don’t know if I can do this, what if everyone hates it?’ Which is a debilitating way to feel. It’s hard to work creatively when you have that in the back of your head, but I think I just came to terms with the fact that you’re going to keep making music regardless.”