The analogue machine funk of Steven Julien: Why Fallen is one of the best albums of 2016 so far

All this week on FACT we’re celebrating the best albums of 2016 so far, bringing you an interview a day with an artist whose record has helped define the last six months. Ben Murphy talks to Steven Julien, also known as Eglo Records mainstay FunkinEven, about continuing a classic lineage through his analogue-heavy debut album, Fallen, due out on July 5.

Steven Julien really loves his synths. The London DJ and producer – previously known as FunkinEven, one of the capital’s most promising electronic artists of the last half decade through his colourful and off-kilter take on funk, hip-hop, house and soul – has a lot of them. Ushered into his Dalston recording studio, I’m struck by the sheer amount of hardware in the room, with keyboards and drum machines stacked against the walls, synths on the desk and synths in racks.

“Some of it I’ve put away in boxes,” he admits, hinting at a larger hoard elsewhere. “It’s what I know. It’s how I always used to make music, for one. Two, it’s a natural take on things. You can make happy mistakes jamming with analogue stuff, rather than sitting in front of a laptop or computer. It’s life, it’s got life to it. It’s second nature to use analogue.”

These machines are the building blocks of Steven Julien’s debut album Fallen, a record that takes the wide-ranging influences of his past work and blows them up to macro proportions. His earlier material suggested an artist with a gift for moving the dancefloor through his love of all kinds of electronic music, from the electro boogie of ‘Sweets’ and the pop leanings of his ‘Phone Line’ (a collaboration with soul singer Fatima) to the Chicago acid of ‘Rolands Jam’ and the grizzled electro of his Apron EP, the first release on his label of the same name.

On his long-player, he takes that notion a step further. Ranging from the dusty house stomp and cascading jazz chords of dancefloor standout ‘XL’ to the menacing synth textures of the ambient title track, the album takes in abstract breakbeat, psychotropic techno and zonked acid to find original pathways through existing forms.

“The album is split, that’s the whole concept. It’s a reflection of me. The yin and the yang”

The first half of the album leans towards Julien’s funk influences, while the second has a tougher techno carapace, the manifestation of a split evident throughout his output to date. For every boogie-influenced cut in his catalogue – ‘She’s Acid’, ‘Kleer’ – there’s a harder, rougher track like ‘Cha’ or ‘Discipline’, suggesting Julien spends as much time lost in the moment on the dancefloor as he does absorbing the laidback jazz of the likes of Roy Ayers and Ramsey Lewis. “The album is split, that’s the whole concept,” he says. “I think that’s what life is – if you’re too happy all the time there’s something wrong with you, if you’re vexed or sad all the time there’s something wrong with you.

Though he’s only been releasing records since 2009, Julien has been producing a lot longer. Originally from Acton in west London, his roots in music go back to his school days when family members with varied musical tastes would influence his listening. “Music was second nature. My uncle and cousins were into music, DJed and would collect records. I just grew up around that, so it’s a part of my upbringing. Anything from hip-hop to house, electronic, rare groove, boogie, reggae, ragga – the list goes on.”

His early interest in hip-hop was the springboard to his start in production. “I had a dance group at school, four of us,” he recalls. “We would do competitions – that stemmed from rapping, I loved Leaders of the New School, Busta Rhymes’ first group. Different characters in that group were like different characters in our group, and I’d be Busta Rhymes. I started off trying to rap but I kind of sucked at that, so I started production ’cause I was quite intrigued about the music and how they put that together, so I gave it a go.” 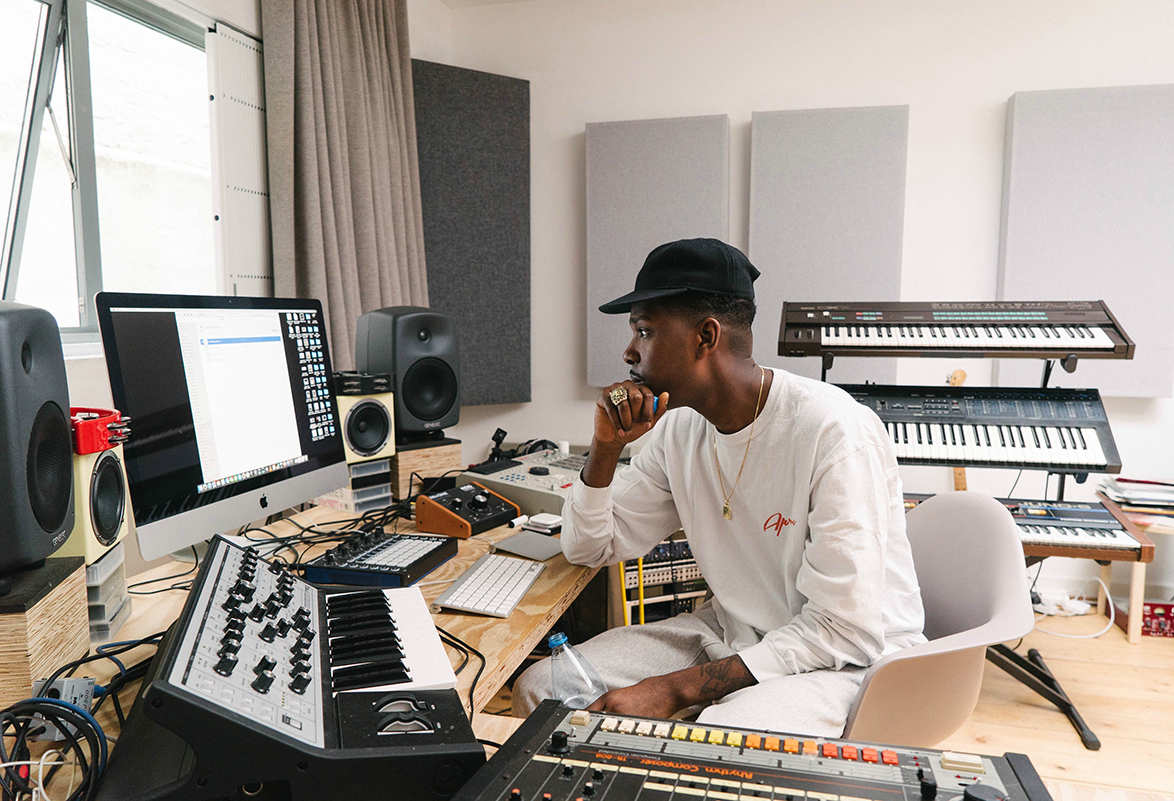 He still has the first piece of hardware he made music on. “That keyboard over there, that Yamaha [PSS 380], I’ve had that since I was about 13, 14. That’s from Argos, it was my mate’s keyboard. I borrowed that and another drum machine, which was a Korg DDD-5. I would record onto cassette tape and see how it would come out. My very first beat was a hip-hop beat, and then a house beat. All the cassettes are there.”

As an older teenager he discovered drum and bass at some of London’s long-gone club destinations. “I was a big Metalheadz fan – we got to go to The Blue Note [in Hoxton Square] and The End club [in Holborn], a crazy experience. I guess I was an early teenager, so that was a blast going to all those things, being able to witness Grooverider and Goldie himself, all those guys DJing.” But it was when he hooked up with the Eglo Records crew that his career as FunkinEven began in earnest, first producing beats for Swedish singer Fatima.

“Fatima was a flatmate of Alex Nut who owns the label, and at the time she was working with Sam [Shepherd, aka Floating Points, Eglo’s co-owner] doing similar stuff. That formed as a clique. One night at [now-closed London club] Plastic People I played some of my beats and it went off, the crowd really loved it. Sam and Alex were behind me and said, ‘We wanna release this’.”

The Eglo crew came together through a shared ethos, typically drawn to the music of the past more than the present. “We had the same interests. Real music is old,” Julien states. “There’s good new music out there, but not as much as there was, from the 1960s, ‘70s, ‘80s, whatever. We had a love of that. It’s a natural thing. It lasts.”

His reverence for the artifacts of the past, the tangible things that persist into the present, can be felt in his strand of analogue-built house music; 2011’s ‘Rolands Jam’, one of his biggest tracks to date, was born from a jam session with two of his beloved hardware boxes, referencing the raw Chicago sound of the late 1980s.

“‘Rolands Jam’ wasn’t supposed to be a release – it was a track I made with the [Roland] TR-707 [drum machine] and the MC-202 [a 1983 mini synth with a similar sound to the more famous TB-303]. It was just a take I recorded to Logic and people really liked it, so it was like, ‘Maybe you should release this?’ I said I wasn’t too sure, it’s just a jam – literally a Rolands jam.” Arriving in line with the early ‘10s appetite for a more raw and stripped-down club sound, the track hit a nerve. “We released it and it kicked off. I thought, ‘Okay, maybe this is working a bit, I’ve got loads of this stuff’. It was something more honest.” 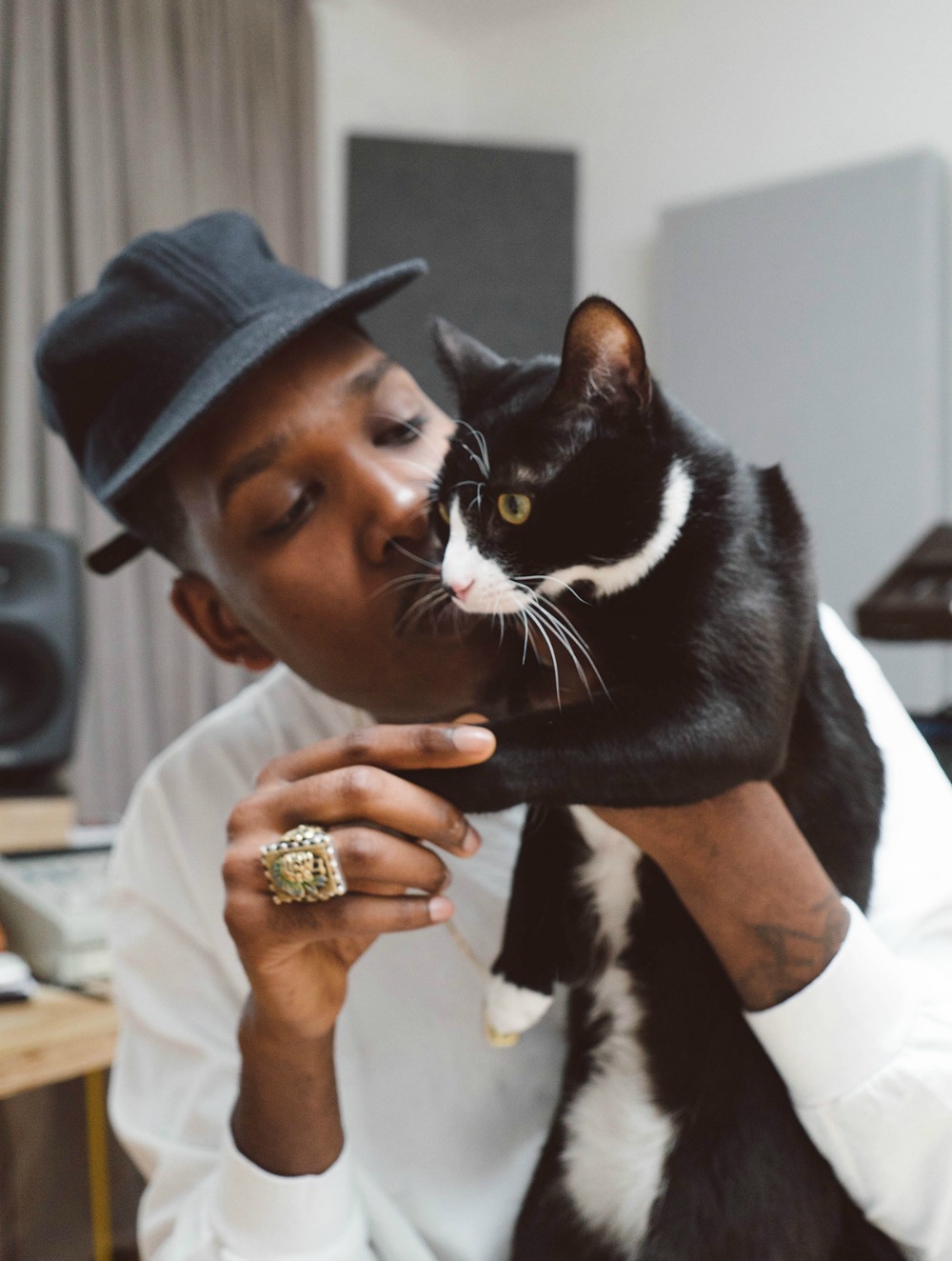 “We released ‘Rolands Jam’ and it kicked off. It was something more honest”

On Fallen, he’s returned to many of his favourite synths, but clams up when grilled on the particulars. “I go through different things and different phases – but no, I shouldn’t give that away,” he teases. “One of these practically made the whole album,” he says, motioning to three rack-mounted synths. “The Yamaha DX7, Korg DW-8000, Roland Juno-6.”

The many influences from Julien’s youth to the present day bleed through the grooves of Fallen. ‘Disciple’ is a turbulent breakbeat cut that sounds like it could have come out during Planet E’s salad days. “‘Disciple’ is pretty old, it’s a track that me and my mate, a drum and bass producer, decided to make all these years ago. I was going through these ZIPs and seeing what I could recreate for my take on it now. I got a bassist to play on the bridge and the chorus. That was it. I ran the MPC drum break through the filter, did a live take, and put it together in Logic.”

Another track salvaged from old sessions and recreated with his amassed knowledge is the moody, jazz-tinged house of ‘XL’. “That stemmed from Nas’ ‘The World is Yours’, and classic hip-hop. Pete Rock [who produced the Nas track] used the same record [The Ahmad Jamal Trio’s 1970 ‘I Love Music’] for that sample. My mate made a tape of all original hip-hop samples and that was one of them. I sampled a different section than Pete Rock did. That’s all it was, just from the love of hip-hop and finding out the original samples that they took.”

That rippling piano sample is an anomaly, he adds. “That’s the only sampled track on the album, but because I played it in a few mixes years ago there was a high demand. If I could go back, I’d use no samples. It’s an ethos. For singles it’s cool, but for an album I think it should be entirely the artist’s impression.”

Beyond his own output, Julien is also focused on his Apron label, which has seen releases from Detroit’s Jay Daniel, LA’s Delroy Edwards and collaborations with Bristol’s Shanti Celeste, as well plenty of music from fresh acts. “Most [of the artists] I’ve met in London,” he says. “I’ve never been to Detroit. I just went to LA for the first time last week. With Delroy, on his first European tour we met in a club somewhere. Then we’d just do a Nandos. He’d come to my house and jam, see what comes out. Jay is exactly the same. Kyle [Hall, with whom Julien has recorded as FunkinEvil] is exactly the same. Greg Beato as well, he’s from Miami but I found him on SoundCloud. It’s not a matter of where you’re from, it’s just the music. I just released a guy, Bastien Carrara, from Paris, so that’s my first European signing. The next one, Lend Me Your Ears, is two guys from Bristol.”

Alongside the records he’s just set up a clothing range based on Apron and is already working on a new album, as well as collaborating with rapper Yasiin Bey, aka Mos Def, and Apron artist Lord Tusk. “We’ve done the majority of [Bey’s new] album, and the stuff he chose that he likes is that stuff I made when I was a kid on cassette tape. We’ve revamped that, mixed it down, and we’re working on that as a vocal thing,” he reveals.

The world of hardware and machines is what feels real to Julien, and he’s determined to create something that’s built to last and timeless. In his mind, that tactility is where genuine creativity comes from. “Most of the time, it’s analogue,” he reminds me. “It’s more honest.”

Read next: The dreamy club fantasia of Jessy Lanza: Why Oh No is one of the best albums of 2016 so far