Fans have speculated about a new Ocean song with the title ‘Nikes’ for over a year, with Chance The Rapper previously rumoured to have been involved in the track following these cryptic tweets. The finished version is more slightly upbeat than the mostly sparse and understated songs shared on yesterday’s Endless, with Frank laying pitch-shifted vocals over a melancholy beat. Check out stills from the video below and head over to Apple Music to watch.

It was reported yesterday that Endless was a prelude to another new album from Ocean, that could even drop this weekend. Apple representatives told Pitchfork to “keep an eye out this weekend for more from Frank”, while Rolling Stone reported another record, previously titled Boys Don’t Cry, was dropping soon.

It’s unclear whether ‘Nikes’ is all to expect from Frank for the rest of the weekend, but it seems likely even more new music is on the way – regular producer Malay, who has been working on new Ocean music for months, was nowhere to be seen on the Endless track list, as was rapper Lil B who confirmed earlier this week his involvement in a new Frank album.

Frank has this afternoon taken to Tumblr to share the lyrics for ‘Nikes’. Read them here. 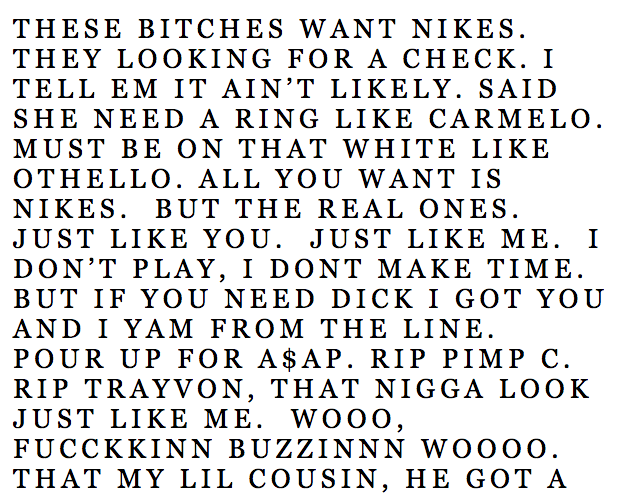 Read next: Here’s why there’s a WTF German techno track at the end of Frank Ocean’s Endless