Japanese singer steps out on her own with album of Enka-inspired reggae.

Kiki Hitomi, one third of King Midas Sound alongside The Bug and Roger Robinson, is releasing her debut solo album this week via Leipzig’s Jahtari label. Titled Karma No Kusari (chain of karma), the album is produced by Jahtari’s Disrupt and features a guest appearance from the late spaceape, best known for his work with Kode 9.

Now based in Leipzig, Hitomi began recording the album three years ago with the idea of blending enka, a traditional Japanese pop music genre dating back more than 50 years, and reggae. Karma No Kusari was recorded using all analogue equipment by Disrupt and Hitomi. The label calls it “a mind-altering journey through time and space stopping by Japanese enka, 8-bit psychedelica and mutated digi dub.”

Hitomi’s career as a singer began in the late 2000s in London with Dokkebi Q, a duo alongside fellow Japanese producer Gorgonn. The pair released one album, 2010’s Hardcore Cherry Bon Bon, before moving on to other projects. This is when Hitomi began to contribute to Kevin Martin’s King Midas Project, adding vocals alongside poet Roger Robinson. Hitomi co-wrote four of the songs on King Midas Sound’s debut album, Waiting For You….

In 2011, Hitomi and Martin collaborated as Black Chow releasing one EP on Jahtari and a track on the Hyperdub 5 anniversary compilations. A former graphic designer, Hitomi has also handled the covers for the first two King Midas albums as well as singles for The Bug and releases on Jahtari.

You can see Hitomi performing ‘Pink No Kimono’ from the album live in Leipzig below. The album is available via Jahtari on vinyl and digital formats. 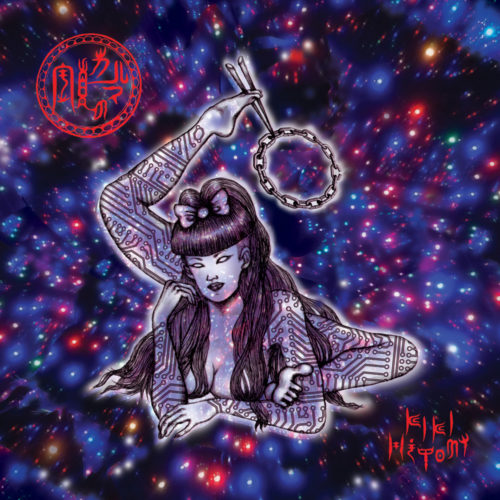