The limited edition zine also features a poem by Frank entitled ‘Boyfriend’ and photography from Nabil.

Teasers of the Boys Don’t Cry magazine were first leaked in April this year while the first hints of the magazine itself go back to summer of 2015.

The early previews included an interview between Frank and Bay Area rapper Lil’ B as well as contributions from Chicago photographer Nabil Elderkin. Those are all included in the final version handed out last night alongside a poem from Frank Ocean titled ‘Boyfriend’ and a text from Kanye West titled ‘The McDonald’s Man’, focused on a distrust of French fries.

Physical copies of the album were also packaged with the magazine, which came sealed in a logo-adorned foil. Other contributors to Boys Don’t Cry listed on the front include Tom Sachs, Wolfgang Tillmans, Viviane Sassen, Harley Weir, Tyrone Lebon, Ren Hang, Michael Mayren, and Jim Mangan. Some of them also contributed to Ocean’s Endless album which was released on Friday.

A list of contributors to Blond (which is spelt Blonde on Apple Music and on the magazine’s wrap) is also included in Boys Don’t Cry as well as the spread Ocean shared on his Tumblr earlier today detailing some of the stories behind the making of the album, his trip to Berghain and his interest in cars.

Blond is out now on Apple Music and copies of Boys Don’t Cry are already making their way onto eBay, fetching up to $1000. 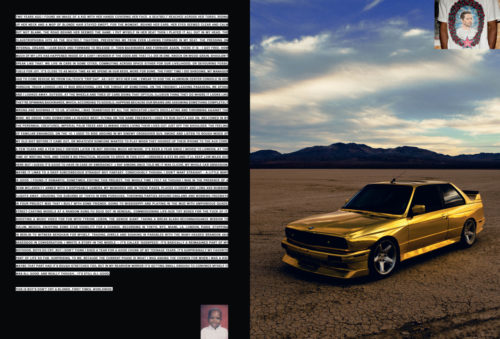