Atlanta: How Donald Glover got his groove back with rap’s first “sadcom”

Donald Glover is a man of many talents: writer, rapper, comedian, actor, DJ, producer. His latest project, 10-episode TV show Atlanta, is his most ambitious to date, detailing the contemporary hip-hop scene with nuance and familiarity. Chris Kelly takes a closer look at TV’s most realistic portrait of rap – which arrives at a time when competition is fierce.

We are in the era of Peak TV. In 2015, a staggering 419 scripted shows aired on television and streaming services (that number is expected to go up by the end of 2016), and amid all the zombies and thrones and scandals and strange things, there are now even a few shows about hip-hop.

The infiltration of hip-hop into television is no small feat – the few that have appeared so far add up to more than the zero rap-related shows that preceded them, after all. But after the straight-outta-nowhere success of FOX’s Empire (and its motion picture counterpart, Straight Outta Compton), TV providers have waded into the narrative possibilities of hip-hop. This year, Empire was joined by Netflix’s Baz Luhrmann-directed The Get Down, which will soon be followed by Dan Charnas’ The Breaks (ordered to series after a well-received backdoor pilot on VH1) and Vital Signs, a series starring Dr. Dre which will be Apple’s first foray into TV.

These shows have so far either relied on soap opera tropes (Empire) or stylized nostalgia (The Get Down looks back to the late 70s; The Breaks to the early ‘90s). Missing, until now, was a show that says something about the contemporary moment in both hip-hop and society at-large, and one that fits nicely alongside the best of what Peak TV has to offer.

FX’s Atlanta is that show. Created and starring Donald Glover, who moonlights as rapper Childish Gambino, the series follows the struggles of Earnest “Earn” Marks (Glover) as he manages the rap career of his cousin Alfred “Paper Boi” Miles (Brian Tyree Henry) in the titular city, while simultaneously trying to raise his daughter and woo her mother Vanessa (Zazie Beetz). More than its logline, Atlanta is the type of comedy-drama (or “sadcom”) that is elevating the art of television.

Atlanta is also a chance for the multi-talented Glover to finally make his mark in the way that his previous pursuits didn’t allow for. Nearly three years ago, Glover explained his decision to leave Community, the sitcom that gave him his mainstream breakthrough, in a series of stream-of-consciousness notes on Instagram which revealed existential fears about his life and career. “I didn’t leave Community to rap,” he wrote. “I wanted to be on my own.” 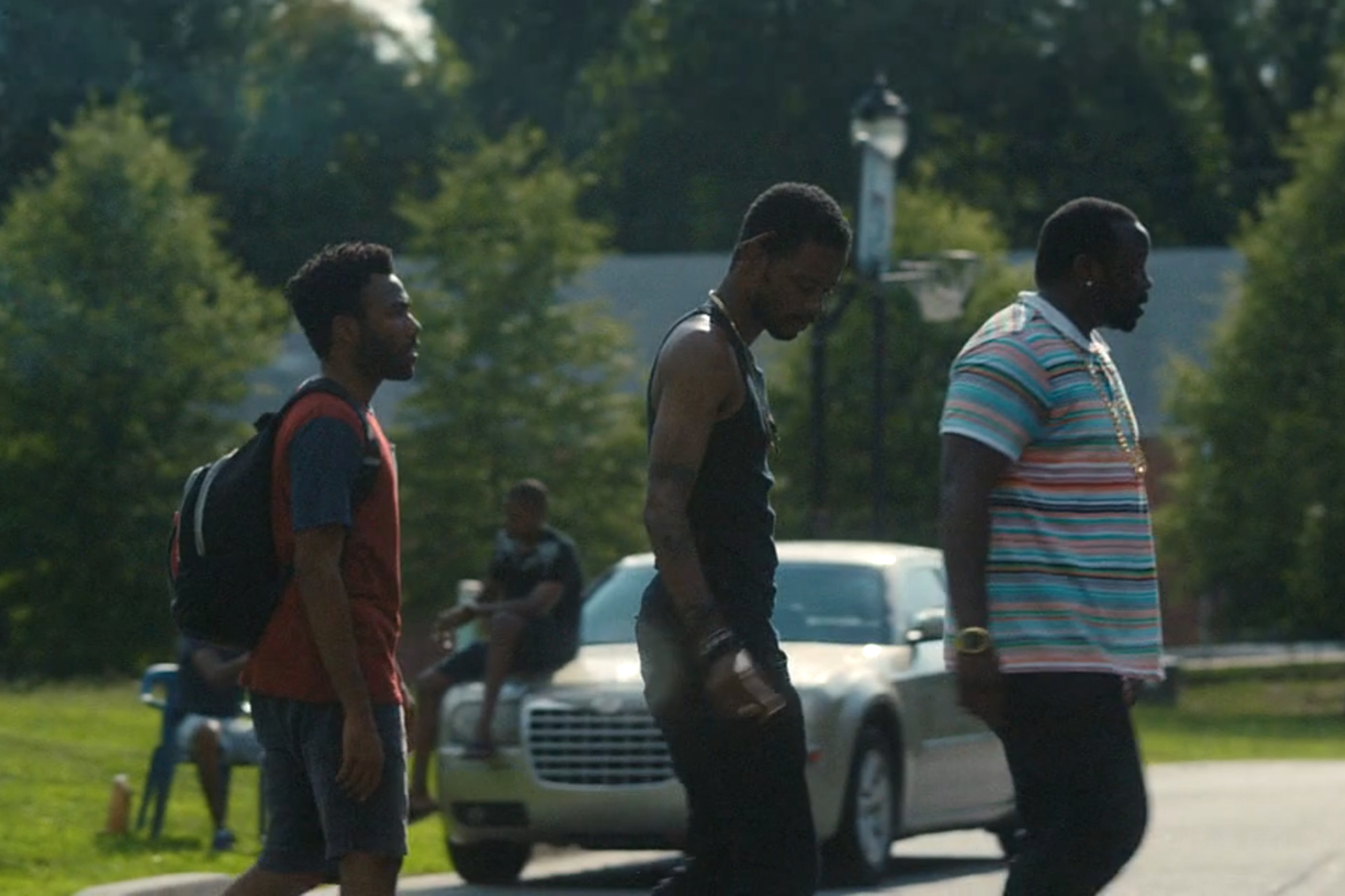 After leaving Community, Glover explored his ennui in the experimental short film Clapping for the Wrong Reasons, which served as a prelude to his second album, Because The Internet (he also wrote an unproduced screenplay inspired by the album). And while the album was better (and better received) than his debut Camp, Because The Internet didn’t garner him acceptance in the rap world. For all his considerable talent and ambition, perhaps his fear about being the next Tyrese – a jack of all trades who settles at being master of none – was real.

Clapping For The Wrong Reasons, which was written by Glover and directed by Hiro Murai (who also directed two Childish Gambino videos, including the excellent ‘Sober’), had an observational, mumblecore feel with plenty of millennial angst and a stoned surreality throughout. The Because The Internet screenplay is a fuller vision of the short film’s world: privileged kids go clubbing and surfing, navigate It’s Complicated relationships, try not to get shot or end up on WorldStar and find purpose through art without being taken down by social media and culture vultures. Both projects inform Atlanta. Visually, the show borrows the bleached-out look and feel of Clapping; thematically, it transposes the ideas of the script from the posh parts of Los Angeles to the lower-middle class parts of Atlanta (plus, an ex-girlfriend named Vanessa features in both).

But Atlanta is more than a continuation of what Glover and Murai were attempting previously: it is the apotheosis. Atlanta is visually interesting and sonically contemporary, with ratatat dialogue and an authentic voice about life in 2016 (worth noting: Atlanta has an all-black writers room). Like many coming-of-age stories, the series is about searching for purpose when you’re young and broke, an arc that is perfectly framed by the world of hip-hop. It also feels lived-in and real, and not in the way of the “gritty realism” of The Wire; most viewers will find familiarity in trying to get into the club before 11, searching for happy hour food specials and sheepishly ordering from the kids menu to save a few bucks. In that way, Glover’s Earn is the perfect main character for an FX sadcom aimed at millennials.

That sense of reality also illuminates the show’s relationship with hip-hop. Paper Boi – an older guy with no fan base who isn’t white and isn’t selling sex, but is simply trying to get rich quick with rap – is the type of rapper you’ll find a thousand times over on DatPiff. The same reality can be found in the life of a rapper with just a little notoriety: still dealing drugs while playing video games, smoking blunts and checking XXL and Complex, but wondering if the milk has gone bad or if that guy at the gas station is going to run up on you. The show also confronts the day-to-day expectations put on rappers at that level, from the black cop who wants a selfie to middle-aged waiter who yearns for the era of “real” rappers who weren’t afraid to let bullets fly.

The world of Atlanta is wider than just rapper and would-be manager. The breakout star of the show is Paper Boi’s right-hand man Darius (Lakeith Stanfield), another familiar character in the world of rap (albeit more over-the-top and played for laughs). With fresh baked cookies in one hand and a butcher knife in the other, Darius is a weed carrier/bodyguard/sounding board, the hanger-on who philosophizes about GMOs and AIDS and offers stoned non sequiturs to anyone who will listen. In real life, most rappers don’t have much contact with a Lucious Lyon – but they certainly have a Darius or two.

After a trailer for Atlanta was scored by Australian EDM producer Flume, there was some concern that the show would be miles away from the real sounds of hip-hop, in Atlanta or otherwise. Thankfully, the soundtrack of doesn’t feel like a TV executive’s idea of what rap sounds like in 2016. OJ Da Juiceman, Yo Gotti, Rich the Kid and even Kodak Black are used as diegetic and non-diegetic music, and the lone song written for the show, Paper Boi’s single ‘Paper Boi’ (perhaps a nod to Ca$h Out’s ‘Cashin Out’) is paint-by-numbers trap rap – not exactly uncommon these days.

In later episodes, Atlanta dabbles in the pseudo-reality of something like its FX network-mate Louie. Migos show up as a fictionalized version of themselves, making drug deals and shooting rifles, and Bankroll PJ (cousin of the late Bankroll Fresh) is a YouTube star’s “business partner,” spitting out catchphrases and unprintable (and, for comedic effect, censored) dialogue. The music and cameos give the show a much needed touch of verisimilitude: Migos selling drugs out of a camper in the woods doesn’t seem that far-fetched, nor does a pint-sized Vine star.

Atlanta is more than a coming-of-age story in the hip-hop world, however. Like the best shows of Peak TV, it’s using the medium to explore issues of race, class, gender and more. In just a few episodes, Atlanta has touched on the “Don Lemons” of the world, “angry black woman” stereotypes and non-black guys who are a little too comfortable saying the N-word. It’s best scenes so far involve Earn’s Kafka-esque stay in a holding cell as he waits to be processed, scenes that mine the intersectionality of police brutality, mental health and trans issues as they bound between horror and humor. 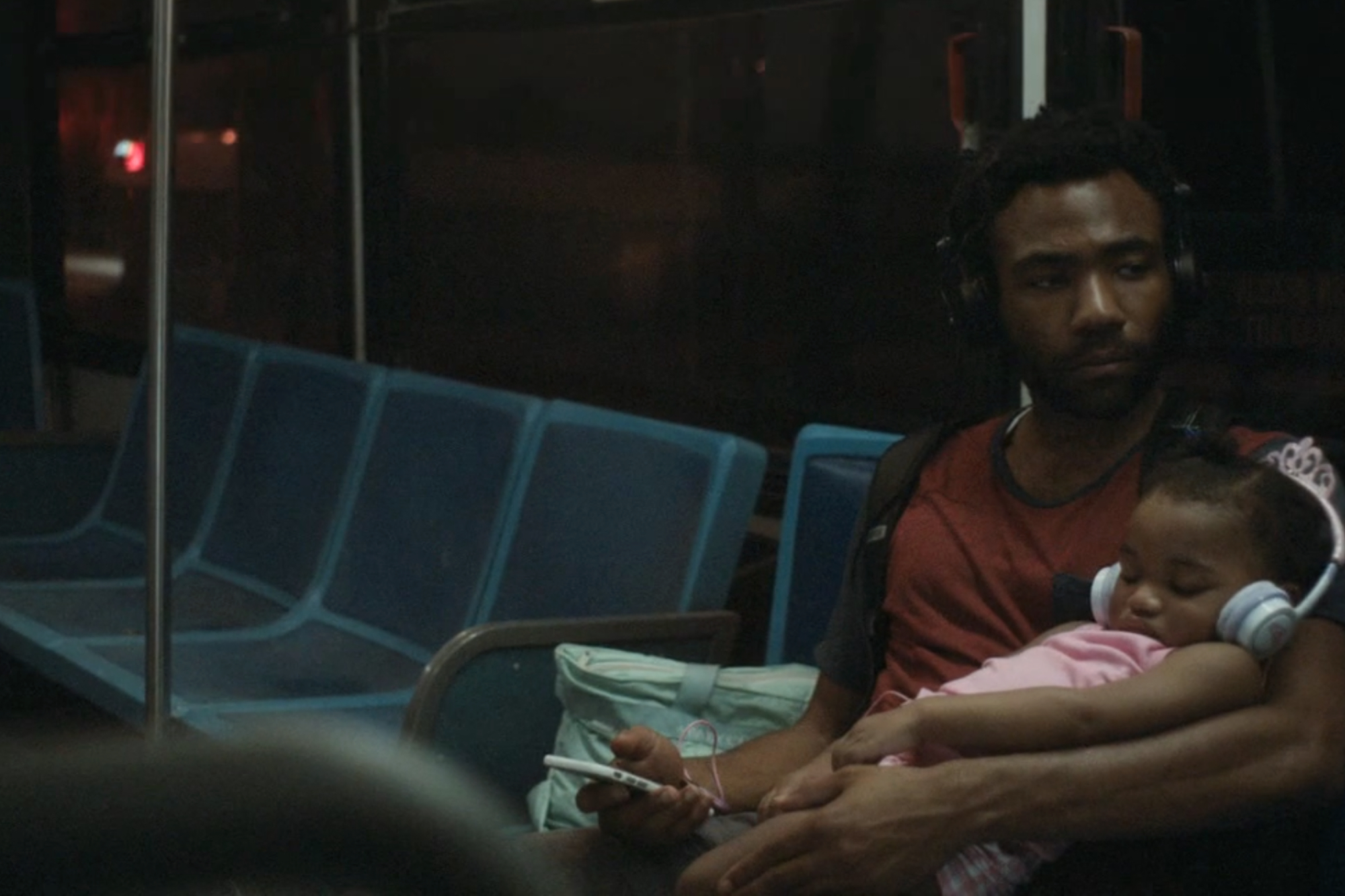 But for every real moment, there is a surreal one: a mysterious Nation of Islam member who offers Earn a Nutella sandwich on the bus before escaping into the night; a box of JR Crickets wings that lights up like Marcellus Wallace’s briefcase (or the “great whatsit” of Kiss Me Deadly, if you want to be pedantic); Darius and Earn’s Garden State-esque journey to make a dollar outta 15 cents.

At a time when reality is stranger than fiction, maybe that’s the only way Atlanta can try to make sense of things. And as far as Donald Glover figuring out how to be the artist he wants to be, it turns out his path to critical acceptance wasn’t TV or rap, but a TV show about rap. The biggest surprise of Atlanta might be that the guy who wasn’t “real” enough to make it in the rap world has made the most strikingly “real” portrait of it.