Politically charged, genre-defying post punk-gospel-industrial group Algiers are set to release their third album There Is No Year via Matador.

The album announcement follows the publication of an eponymous digital-art project and new audio piece ‘Can the Sub_Bass Speak?’, shared back in August.

Unlike their previous, more retaliative works, 2015’s Algiers and 2017’s The Underside of Power, Matador describes how There Is No Year manifests sounds of spiritual resistance, free fall, loss of control and internal struggle as the result of being written during a relentless two-year touring period.

The group has shared a video for the lead single ‘Dispossession’, which is streaming below.

In the words of director Sohail Daultazi “‘Dispossession’ sounds the warning about the permanent war against oblivion . . . Filmed in Paris, the video opens with the sites of colonial massacres of Algerians, moves to the repressive spaces of the banlieues, and includes shots of the Jardin d’Agronomie Tropicale – a park that celebrates the glories of empire”. The video also includes imagery from the band’s visit to Algiers during the 2019 Algerian protests.

Pre-order the album here ahead of its January 17, 2020 release and see the album artwork and tracklist below. 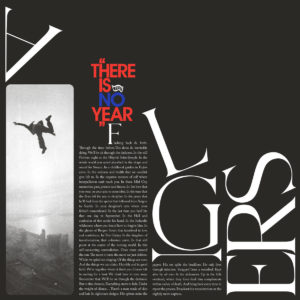 Read next: Post-punks Algiers tackle political unrest on American and British soil on The Underside of Power